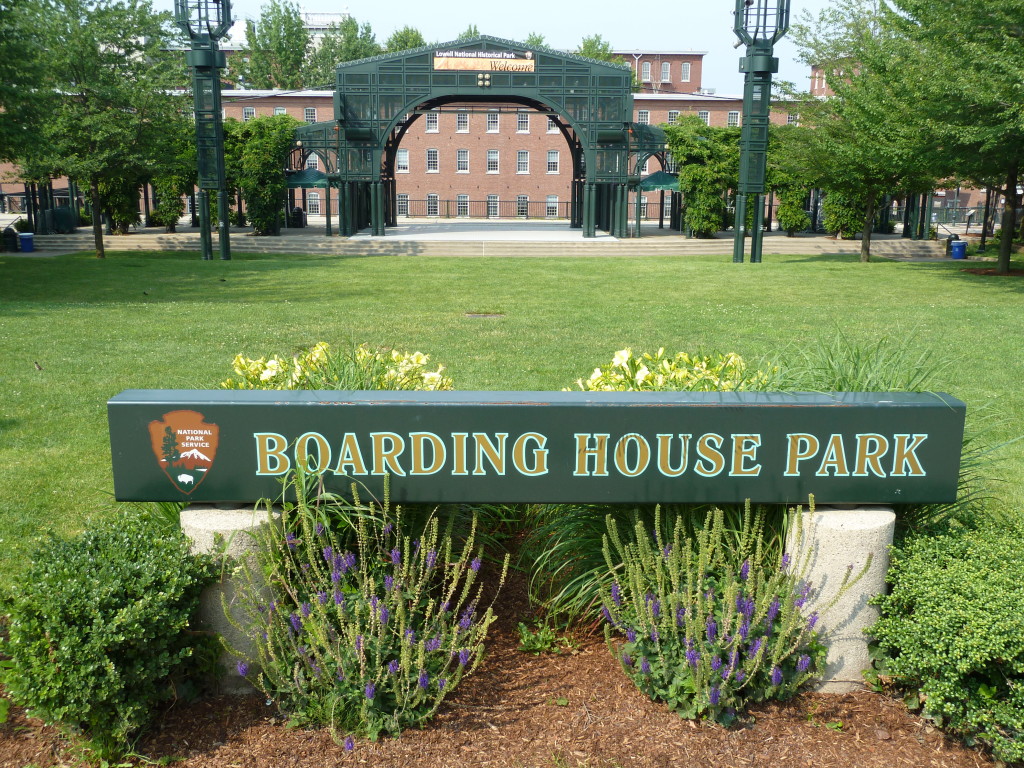 Fred Faust, the President of The Edge Group, a real estate consulting firm, who was an assistant to US Senator Paul Tsongas, shares the following essay:

This is the first in a series about people in the Greater Lowell area who have taken initiative and achieved special things. Feel free to suggest others who should be so recognized and have interesting stories to tell.

“I came to the Preservation Commission in 1986 as Executive Director.   At that time there was a vision for a public amphitheater type space at the Boott Mill. When I arrived, I said, oh that’s great. When will that be built? They said, well, we’ve only got one problem. The owner of the mill won’t sell the land. I was astounded.”

Today, almost 30 years later, Peter Aucella is the Assistant Superintendent of the Lowell National Historical Park. In additional to his administrative and development duties at the Park, he books the acts for the Lowell Summer Music Series. This includes overall responsibility for organizing and promoting the shows. There have now been about 500 shows at Boarding House Park since 1990. At an average of a modest 1,000 patrons per show, there would have been 500,000 visitors that have attended the shows.

As Aucella related, Lowell’s Boarding House Park back in 1986 was an aged parking lot for the Boott Mill and H&H Paper Company. The Preservation Commission conceived the park for outdoor performances and to compliment plans for a restored boarding house – one of the few that survived demolition after Lowell’s industrial decline.

Aucella and the Commission engineered a complex three way land exchange at the time. This resulted in a substitute parking lot for the mill and also funded the expansion and modernization of the John Street Parking Garage. This freed up the existing parking lot to be developed as Boarding House Park in the late 1980’s. Bring on the Acts

How much experience did Aucella have dealing with music acts and promotion? His answer would be “zero.” Starting in 1990, the Park experimented with different acts, mostly local and typically free. The first act was the Mandala International Folk Dance. Some 350 people attended.

“We realized that a single cultural act was not going to attract people like, say, the Lowell Folk Festival,” said Aucella. A year later, when Livingston Taylor played, the crowd was at capacity at 2,500. That success began to take the shows in a different direction. The City of Lowell cooperated by closing French Street and assisting with security. This allowed admission to be charged and better known acts were able to be booked.

“I think we went from free to a $3.00 admission fee, but it was always voluntary,” said Aucella. “Eventually, we found out by mixing in better known acts, people would in fact come to Lowell in the evening and pay for a high quality act.” Over the years, artists like Joan Baez, Brandi Carlisle, Judy Collins, Melissa Etheridge, Richie Havens, Martha and the Vandellas, Lyle Lovett, The Indigo Girls, Bare Naked Ladies and KD Lang have performed in Lowell. As a first hand attendee at many of the concerts, I can say that it is fair to say that sitting on the lawn on a beautiful summer evening under the stars and with proximity to the stage, well, there aren’t a lot of better things to do than take in a show at this extraordinary environment. The boarding house and Boott Mills form the background. More frequently than not, the performers are caught up in the uniqueness of the setting and enthusiasm of the audience. Aucella, at his desk, demonstrates at his computer how planning the music series is now made easier by technology, as well as acceptance of Lowell as a great venue. On line services provide statistics about how many concert goers attended a Willie Nelson performance, as an example, and how much the concert grossed. The best known acts, however, don’t always provide the best returns. What’s been the most expensive fee paid for an act? A well-known music act Aucella did not identify this year commanded as much as $65,000. Getting a bead on newer acts, like this year’s Lake Street Dive performance, can actually be more rewarding financially. Lake Street Dive is an example of a rising act that sold out very early. It’s a show that is among Aucella’s favorites. The goal with the series, of course, is not just to increase profits. The series has to support itself to be sustainable. Through Aucella’s efforts and the staff of the Park, including emcee and coordinator John Marciano, the series has built a reputation for quality and professionalism. Trombone Shorty with the audience; according to Aucella, “Shockingly fun”

Aucella estimates that he’s attended 495 shows out of 500. What makes a show special for him? “Personally,” he states, “I don’t look to meet the performers or get my picture taken with them or to get an autograph. What I want is for them to come, to be in a good mood, in a good creative place. I want them to give people the benefit of their talent, their love so people feel it’s special. Do our business and send them home. We want to show a well-organized operation. We want them to feel safe, which they do. So to me there’s nothing more I enjoy, when there’s been a great show, is to see people picking up their blankets, folding their chairs, reveling in the performance and in the fact that they’ve seen a great show at Boarding House Park in downtown Lowell.”

As for next season, Aucella already has some concrete ideas for new acts. “We’re already reaching out to agents.” Does he want to share any previews for 2016? He smiles. “Just stay tuned.”