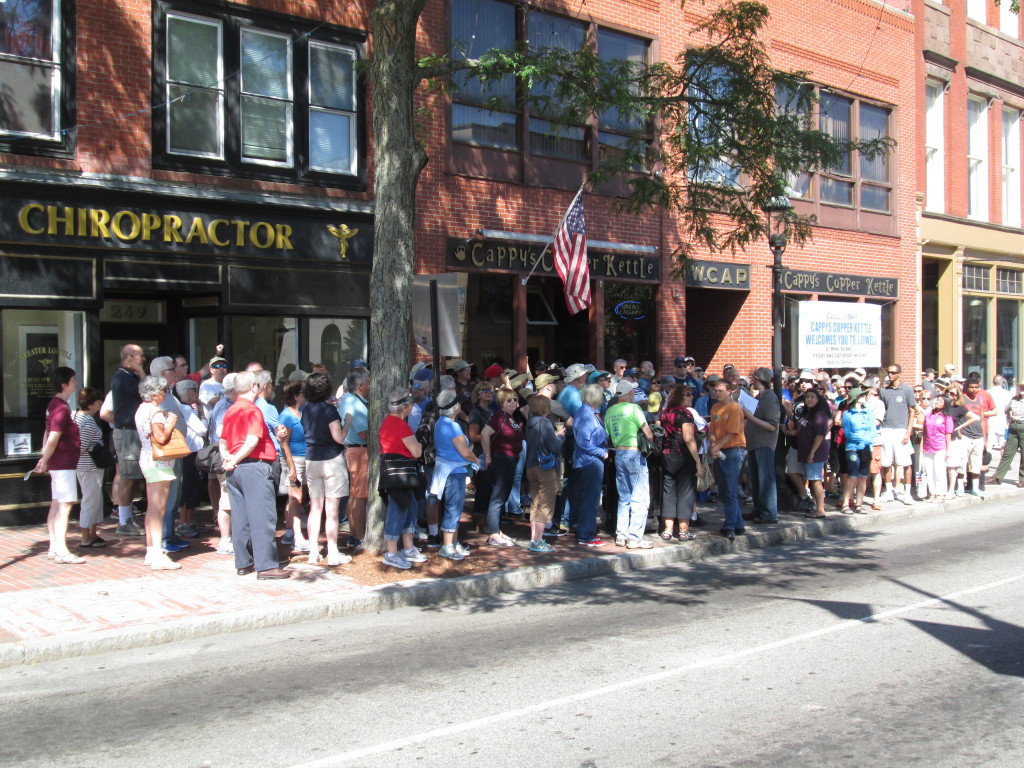 School began this week in Lowell, both Lowell Public and UMass Lowell. I know UMass is back because the biggest education news of this week was the escape of some biology professor’s tarantula. Watching New England Cable News the other morning, old friend Latoya Edwards teased an upcoming story just before a commercial break with “Lowell Police are on the lookout for . . .” My mind raced. What happened now? “a tarantula.” Well, that’s not so bad. Unless you’re a student with classes in that building.

Other than that, there didn’t seem to be any major malfunctions, school-wise. I think expanding breakfast and lunch to all students is a good idea. Many children in Lowell start school very early, especially those at Lowell High, and many probably don’t get up early enough to eat breakfast. Being able to grab a smoothie or a bowl of cereal on arrival at no cost should help the learning taking place from then until lunchtime.

The council race should pick up, too, although with only one of the nine incumbents not seeking reelection (that would be Bill Martin) the pathway to election for challengers is tougher but not impossible. Here are the council candidates:

And here are the challengers: 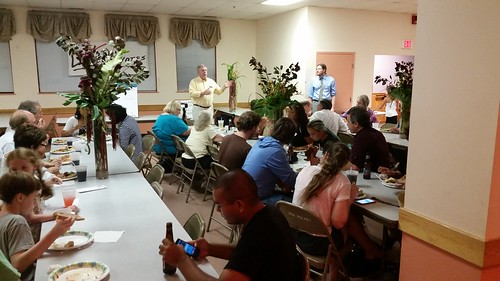 Wednesday night I attended a spaghetti supper at the Dom Polski Club co-hosted by the Centralville Neighborhood Action Group and Lowell Votes. Lowell Votes is a non-partisan, grassroots organization created this year with a mission of increasing the turnout in city elections (Note: I am a member of Lowell Votes). Here is what is written on the home page of the group’s website:

We believe that if more people were to vote in local elections, the city of Lowell and all here would benefit.  To help make that happen, join with other Lowellians in a nonpartisan, grass roots effort to increase participation in the next city election, especially in neighborhoods with historically low turnout and among groups that have faced barriers to voting.

Lowell votes does not endorse candidates or causes other than increased voter participation. The group has been canvassing neighborhoods on Saturday mornings in August, activity that will increase as the election draws near.

The City Council is still on its every-other-week summer schedule but does meet this Tuesday. There are a few “motion responses” on the agenda including one that caught my eye. It’s from the city solicitor’s office with a proposed ordinance to restrict the use of unmanned aerial vehicles (drones) in certain places in the city. The solicitor does point out that the federal government and then the state have jurisdiction over the air above the Commonwealth and that any ordinance passed by Lowell would have to be consistent with existing or new federal and state rules. With that in mind, the proposed city ordinance simply restricts anyone from flying a drone within 300 feet of a school or public playground. I believe this was prompted by a concern that individuals with an unnatural interest in children would use an aerial drone equipped with a camera to somewhat surreptitiously obtain footage of children in school yards and on playgrounds. There is no punishment proposed for this ordinance but I guess it would give the responding police the power to say “knock it off” to the drone’s pilot.

There are nine motions including one asking for information at future bookings at the Lowell Memorial Auditorium (Rita Mercier); a joint motion to support State divestment of fossil fuels (Rita Mercier and Bill Samaras); several related to public safety including better lighting in downtown, more use of security cameras, and an update on upper Merrimack Street (all by Bill Samaras); and one to redesign the intersection of Gorham and Moore Streets (Mayor Elliott and Councilor Leahy). That last one is probably a good idea because Gorham Street on the downtown side of Moore jams three travel lanes (one outbound; one turning onto Moore; one inbound) into a very narrow space. 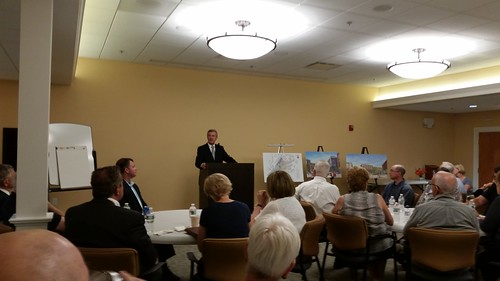 This past Monday night at the Enterprise Bank’s Community Room, City Manager Kevin Murphy gave an update on the Hamilton Canal District. I wrote a full blog post about the talk but here are some highlights: The RFQ for the new master developer will go out this week. The city will definitely build a 900 space parking garage in the district; the only question is whether the first floor will be needed to accommodate tour buses visiting the National Park or whether those buses will be allowed to park elsewhere, thereby allowing the city to make the first floor of the garage retail establishments. The City Manager also said that construction of the Judicial Center will commence next summer and take 30 months to complete. That puts it on track to open in early 2019.

Yesterday’s Lowell Walk, which was on the history of trains and trolleys in the city, brought us to the Hamilton Canal District. We were just there a few weeks ago on another Saturday morning tour, but even in that short time the work being conducted there is quite evident. I believe the most visible work is the extension of Jackson Street which will angle towards the Fletcher Street intersection with Dutton. This new portion of Jackson is needed for construction of the courthouse to begin, so it’s great to see work underway. 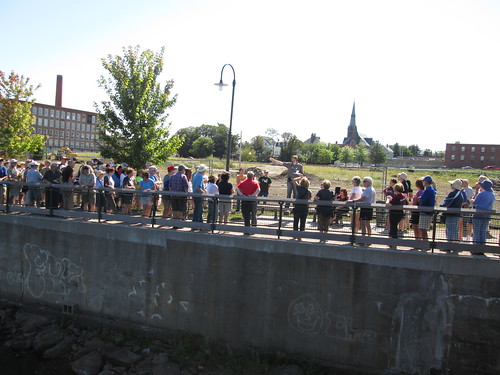 We had another 100+ crowd on yesterday’s Lowell Walk (we gave out 120 lapel stickers so at least that many joined us). Christopher Hayes did a great job of leading us on a circuit of downtown, from the NPS Visitor Center to the corner of Merrimack and Dutton where once stood Huntington Hall, a major train station in the city. From there it was down Merrimack to Kearney Square which was a streetcar hub. Next, it was up Central to Middlesex to view the Rialto Building which was once the station that serviced trains heading south and east. From there it was up Middlesex and onto Jackson, talking about street cars, new and old, and the Middlesex Street train depot which served the city through much of the 1900s, disappearing in the late 1950s to make way for the construction of the Lord Overpass. 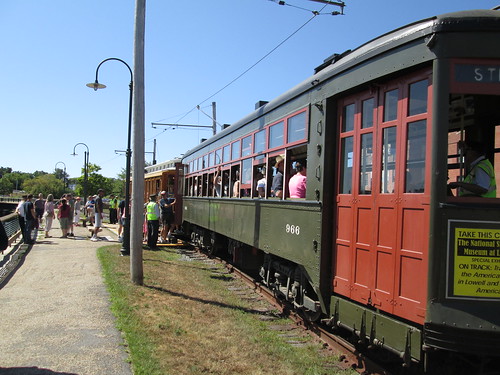 Trains & trolley tour ended with a ride back to Visitor Center

The final summertime Saturday morning Lowell Walk will take place next Saturday. It will be led by Dave Ouellette and the topic is Renewing the Acre. The walks will continue into the fall with other tours and some indoor talks once the weather no longer supports outdoor walking tours. Keep checking back here for more info on upcoming events.

At the Hamilton Canal update meeting, City Manager Murphy also mentioned a downtown venue: Lucy Larcom Park. He said that greenspace that borders the Merrimack Canal from Merrimack Street to Father Morissette Boulevard, was “the most underutilized spot in downtown” and hinted that the city has exciting plans for it. 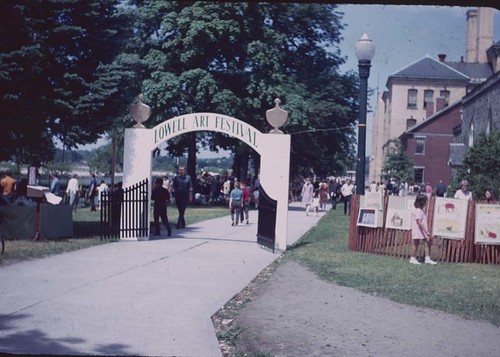 I agree that Lucy Larcom Park is an underutilized asset. Back in the 1960s, the Lowell Art Association used to hold its annual art festival on Lucy Larcom, shown in the photos above and below. These days, it only seems to be used during the Lowell Folk Festival which uses it as a venue crafts demonstrations and increasingly for paid promotional opportunities by businesses. That’s all fine – I understand the need to finance the festival – but given all that goes in in downtown during the Folk Festival, Lucy Larcom always seems a peripheral part. 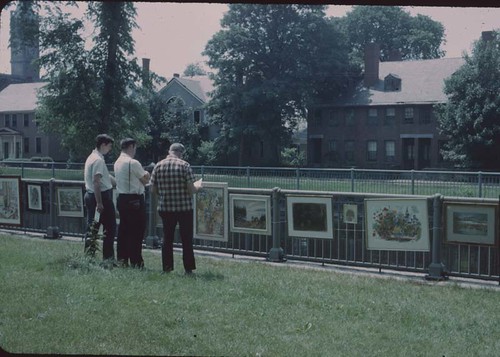 Back in the spring, the City Council passed a motion to hold an Art Festival in Lowell. A “progress” report that came soon thereafter said there was not enough time to mount such a festival in 2015 but that it would be done in 2016. I haven’t heard anything more about it. I hope it hasn’t been forgotten. Lucy Larcom Park would be a great place to hold such an event. As the photos make clear, it’s been done there before, very successfully. 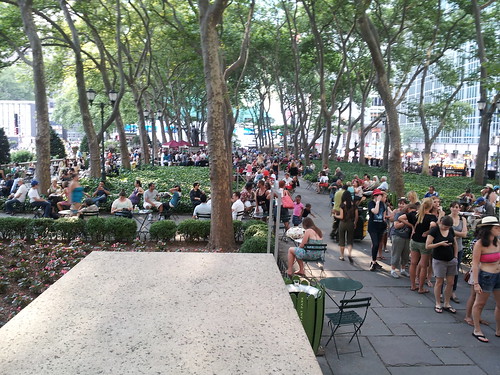 But Lucy Larcom could be far more valuable than just the site of an occasional festival. If you’ve ever been to New York City and visited Bryant Park, which sits immediately behind the New York Public Library, you could see Lucy Larcom becoming a smaller version of that. Besides a large lawn used for concerts and films showings (which Lucy Larcom doesn’t have), Bryant Park has a big, shady strip filled with café tables, chess sets, and a few outdoor ping pong tables. Each day the library rolls out a few racks of newspapers and books for people to read and I believe there is free WiFi service. 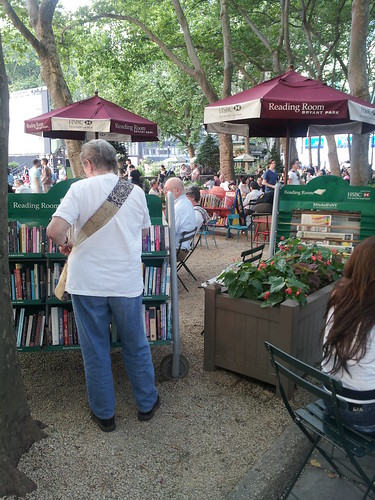 Why not do something like that at Lucy Larcom, especially in the summertime when Lowell High is not in session? People could buy takeout meals from the many restaurants along Merrimack Street and dine on a café table along the canal in Lucy Larcom. To me, that’s more conducive to a pleasant outdoor lunch than sitting within a tight enclosure on the Merrimack Street sidewalk, breathing exhaust fumes along with the aroma of your meal. Because there’s no retail on the Father Morissette side of the park, position a food truck or two there. Instead of carts filled with books, magazines, and newspapers, revive the library’s bookmobile or just load some reading material into the COOL mobile and park it there each lunchtime. Why not try it out? Sometimes actually doing something yields better results than meeting and planning incessantly. 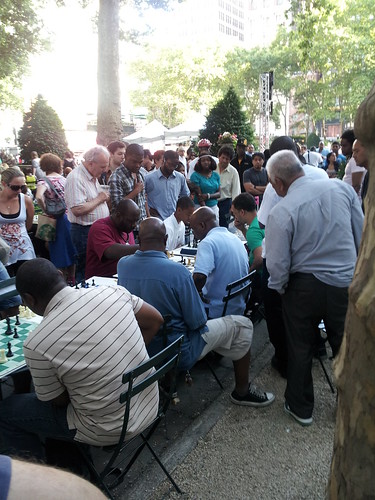 Chess is popular in Bryant Park

Happy Labor Day.  Besides enjoying a day off, consider doing something to commemorate the history of the labor movement and working people in America. How about a visit to the Boott Cotton Mills Museum to see its excellent exhibit on Lowell and the working people who have lived and worked here.  Or drive down the river to Lawrence for that city’s Bread and Roses Festival, tomorrow from noon to 5 pm. Professor Bob Forrant, who is heavily involved in that event, will be delighted to see some faces from Lowell.