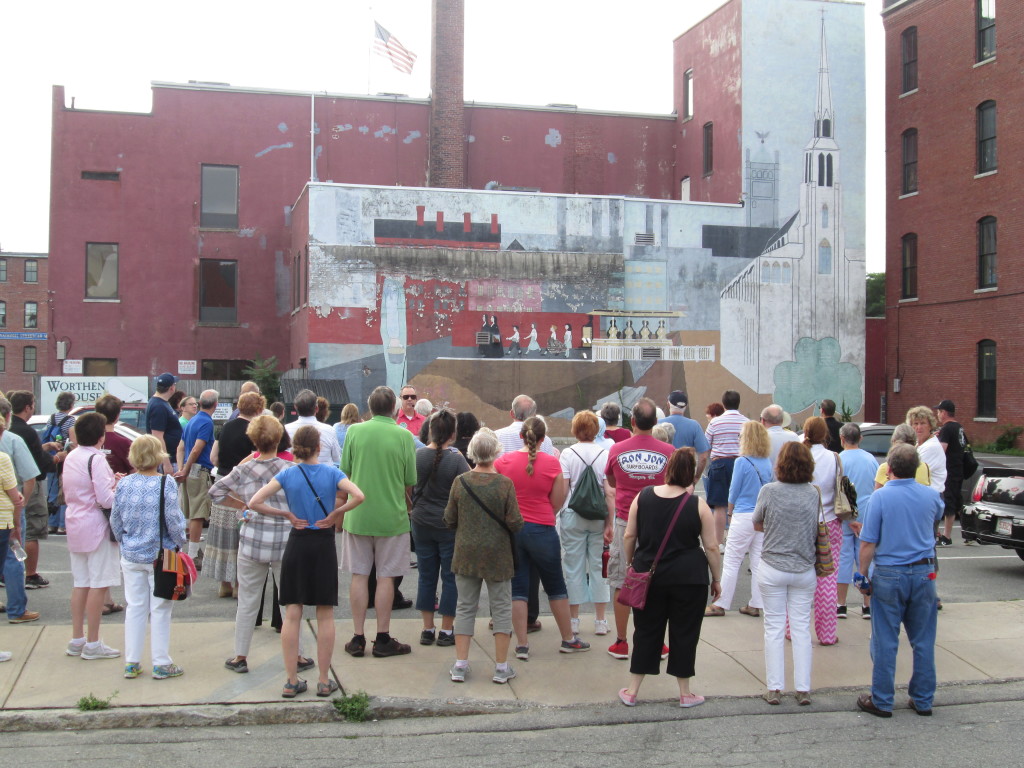 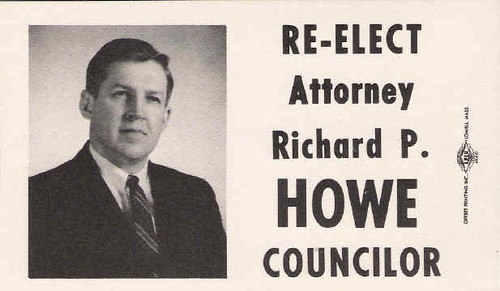 This past week the Election Commission finalized the list of candidates for City Council and School Committee (listed below). The city election will be held this year on Tuesday, November, 3, 2015. Each voter may vote for up to nine candidates for council and up to six candidates for school committee (two seats on the Greater Lowell Technical High School are on the ballot but there are only two candidates, incumbents Ray Boutin and Curtis LeMay, so the drama of the other races will be lacking).

Both the council and the school committee are elected at-large which means the neighborhood in which a candidate lives is technically irrelevant. I say “technically” because electorally, candidates who live in Belvidere (and more recently, in Pawtucketville), tend to do best in city elections.

With that in mind, here are the candidates for council and for school committee, broken down by neighborhood:

With 19 city council candidates, there is a need for a preliminary election to eliminate just one candidate. Any time that happens there are complaints of the cost of that election being a waste of money and vows to amend the charter to raise the number of candidates required to hold a preliminary. But does that really make sense? If we increase that number to 22 candidates, what happens when we have 23 qualify for the ballot? There would be the same complaints about money being wasted. There is no magic number when having one more than that would not seem unnecessary, so people ought to just accept 18 as the cut off and live with it.

The City Council meets this coming Tuesday night. There are a couple of items on the agenda that caught my eye:

There is a communication from City Auditor Hannah York to the Council. York is leaving the job after just 15 months. I believe when she communicated that news, she cited “personal reasons.” This communication is silent on that topic. She does include a list of report deadlines that have to be met. She also reminds the council that in year’s past, two positions in the office were cut due to financial constraints but they’ve never been restored. She urges the council to consider doing that, at least in part, to help ensure all work required is completed in a timely manner.

There is also public hearing on a vote to borrow $2 million dollars to fund the state-directed feasibility study for the possible new high school. Even when the council was only voting to send this matter to this public hearing, several councilors seemed antsy about the whole thing. Plus, there’s a continual buzz that some alternate plan that would move the high school out of downtown is being promoted by certain elected officials and other individuals, so this could be a very interesting discussion. 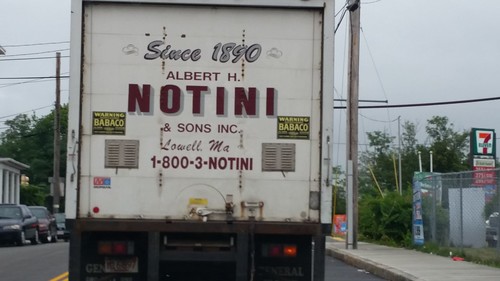 After 125 years on business in Lowell, Albert H. Notini & Sons Inc., closed for good on Friday. According to a Lowell Sun story on Thursday, an outfit called Pine State Trading Co. of Maine purchased the business.  Pine State, according to its website, “is New England’s leader in the marketing and distribution of convenience and beverage products.”

It’s sad anytime a long-time business closes, but markets and businesses change, especially over long periods of time. For instance, two big sellers for Notini were cigarettes and camera film. Demand for cigarettes is greatly reduced and camera film is such a novelty item these days that I have to precede the word “film” with the word “camera” just so many readers will know what I’m talking about. 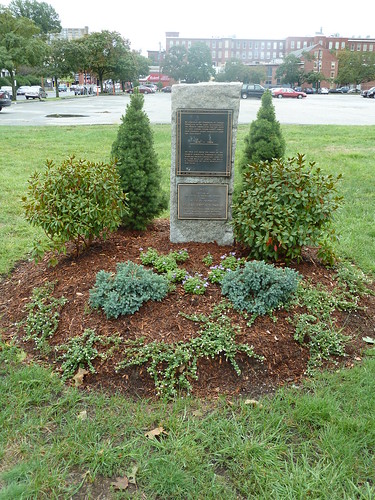 Anyway, it always seemed that the Aiken Street parcel on which the Notini building sat was far bigger than the company’s needed. Perhaps the current owners were interested in liquidating that asset while there was a buyer willing, ready and able to pay top price for it. That buyer would be UMass Lowell which I’d previously heard was interested in the property. It would be shocking if UMass Lowell were not pursuing the acquisition of that parcel and even more around it. That entire neighborhood, once known as Little Canada, has been branded as the East Campus of UMass Lowell. With the Tsongas Center, the Campus Recreation Center, five existing dormitories (Leitch, Donahue, Bourgeois, and Fox Halls plus University Suites), and University Crossing (formerly St. Joseph’s Hospital), the University has indeed created a significant footprint in that corner of Lowell. To me, the best consequence of that deployment is that it brings more and more students closer and closer to downtown Lowell.

Many repeat the mantra that Lowell’s future is as a “college town.” I fully embrace that vision because it takes advantage of the presence of the University, Middlesex Community College, and Lowell High in and near the downtown. Besides, what’s the alternative? I do suspect that some who claim to embrace the term either don’t understand it or don’t actually believe in it. I know the city manager and at least some of the councilors do; hopefully that’s enough to keep that idea alive and advancing.

And this being Lowell, there is the inevitable complaining about UMass Lowell “taking property off the tax rolls.” Whenever I hear that, I’m reminded of the guy who won a new car in a raffle and then complained that it didn’t come with a full tank of gas. That kind of talk used to bug Marty Meehan so much that he commission a study to rebut it. Called, The Economic Effect: How UMass Lowell Benefits the City of Lowell and published in 2013, the study is well-worth reading.

If you’re reading this prior to 11 am, consider heading down to the Boott Cotton Mills Museum where a National Park ranger will lead a free tour along the Riverwalk and the Northern Canal Walkway to the Pawtucket Gatehouse which is alongside the O’Donnell/School Street Bridge and at the start of the Northern Canal. I don’t think many people have made it onto that Northern Canal Walkway, so today is your chance. The tour is free, requires no advance registration, and will be conducted rain or shine. 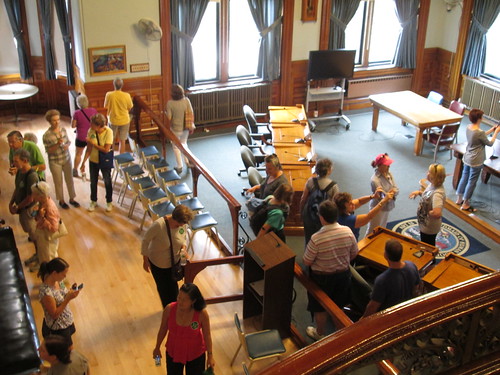 Yesterday, Jim Dyment, the Executive Director of the Brush Art Gallery, led a great Lowell Walks tour called Lowell Artists: Past and Present. Jim brought the 86 people in attendance inside several of the city’s art establishments including the Brush, the Whistler House Museum of Art, the Arts League of Lowell Gallery and the new uncharted Gallery on Market Street.

Even with all of these great art venues, the highlight for many was a visit inside Lowell City Hall which was arranged, at Jim’s request, by City Councilor Corey Belanger (who joined the tour along with his colleague Bill Samaras). Between the newer paintings by local artists now hanging in the City Council Chambers and the mayoral portraits hung in all the hallways, there was much to see. And as one attendee commented, “this is the first time I’ve come to City Hall to do something besides pay a bill.” I see a combination art and history tour of City Hall by itself as a future episode of Lowell Walks.

Next week’s tour will feature all of the monuments found in the vicinity of City Hall. I’ll be leading that one. Like all the others, it will begin at 10 am on Saturday (August 29) at the National Park Visitor Center on Market Street.