My Tuesday blog post recounting my search for lunch in downtown Lowell was so well-received that I thought I would do it again. Well that’s not entirely true.  Not everyone received it well, but no matter.

Today was still sunny and warm at noon, but the air was much more comfortable than on Tuesday. Perhaps that’s why more people were roaming the sidewalks today. Not wanting to be a jaywalker on Tuesday, I had strictly adhered to the rules for pedestrians, but in downtown Lowell that proved both frustrating and dangerous. Today was a more pleasant walk due to an altered route and a prodigious amount of me ignoring official walking rules when the situation dictated. Walking from the Superior Court to Merrimack Street, I found that by staying on the east or Concord River side of Central Street, the intervening intersections were more easily crossed due to narrower side streets and working pedestrian lights than was the case on the other side of Central.

Of the many dining recommendations I received in response to my Tuesday post, the thought of a grilled cheese sandwich from the Brown Bag Café in the lobby of 144 Merrimack Street struck me as a good choice for today. With the sandwich and a cold drink, I could walk over to Lucy Larcom Park and eat lunch while sitting on a bench overlooking the Merrimack Canal.

As I approached 144 Merrimack, though, I could see a gathering of Lowell Public School principals and administrators on the sidewalk. They were all there at the School Department Admin Offices for an all-day meeting. It was lunch break. The wisdom of the School Committee’s decision to move the School Department Headquarters from the Rogers School back to Merrimack Street to help boost downtown businesses was much in evidence; the lunch line at the Brown Bag was substantial. Reminded again that dining in downtown demands flexibility, I altered my plans. 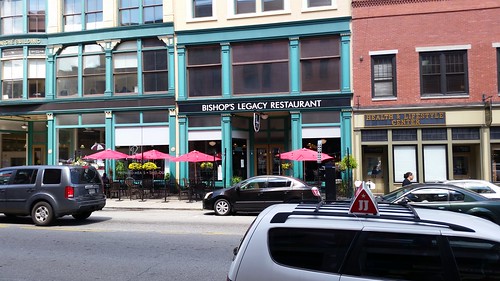 Directly across Merrimack Street from the Brown Bag was Bishop’s Legacy Restaurant, the offspring of the Lawrence establishment where more than once in the 1970s I consumed excellent prime rib. I confess that I had not yet tried the Lowell incarnation. That omission ended today. I crossed Merrimack (at the Palmer Street lights which do work) and went inside Bishop’s.

Entering the former La Boniche space, I was surprised by how many tables were inside and pleased to see that quite a few were occupied. One was occupied by two friends who solve Lowell’s problems over lunch. Not wanting my presence to hinder their efforts, I slid over to the bar and grabbed a seat.

I ordered the Eastern Mediterranean Lunch Assortment which consisted of stuffed grape leaves, stuffed cabbage leaves, lima beans in tomato sauce, rice pilaf and kibbe (something like meatloaf). It was delicious and greatly exceeded my expectations. Whoever it was who recommended Bishop’s on Tuesday, thanks. When asked, the bartender said this dish was a special that was frequently offered which increased the odds I’ll return sooner rather than later.

My walk back up Gorham Street was uneventful. Again, I wandered to the Concord River side of Central Street. As I passed in front of the Rialto, I noticed the Washington Savings Bank thermometer reporting 85 degrees, a full ten less than the same time on Tuesday. While waiting there for the pedestrian light to signal me across Green Street, I noticed how narrow the lanes of that street are. 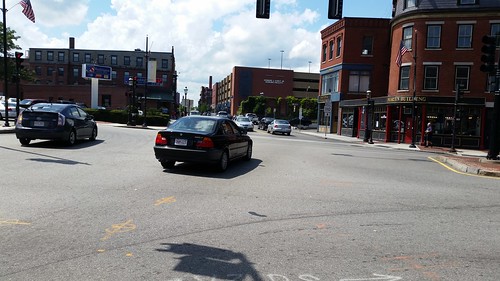 Green Street runs between the Rialto and J.J. Turner’s (now known as Ward 8). There are two lanes, both heading west onto Middlesex Street. Two lanes of traffic fit pretty easily into this small space. The narrower width makes it easier to walk across and the cars seem to do just fine, moving slower once the light changes because they are closer together in the smaller space. Slower cars means a safer situation for everyone, so that’s a good thing. Perhaps as part of the Complete Streets program, the city should look at narrowing other downtown travel lanes. The capacity for carrying vehicles would not be reduced but speeds would, and the saved space could be used for parking, bike lanes or even just sidewalk bump outs to make the walk across the intersection shorter and faster.

Look for my next Walking in Lowell installment early next week.

NOTE: For all who were enticed by my advocacy of the BLT from Café UTEC, I received word that the Café would not reopen until August 31. If you need a BLT fix before then, the Owl Diner serves a good one for lunch.