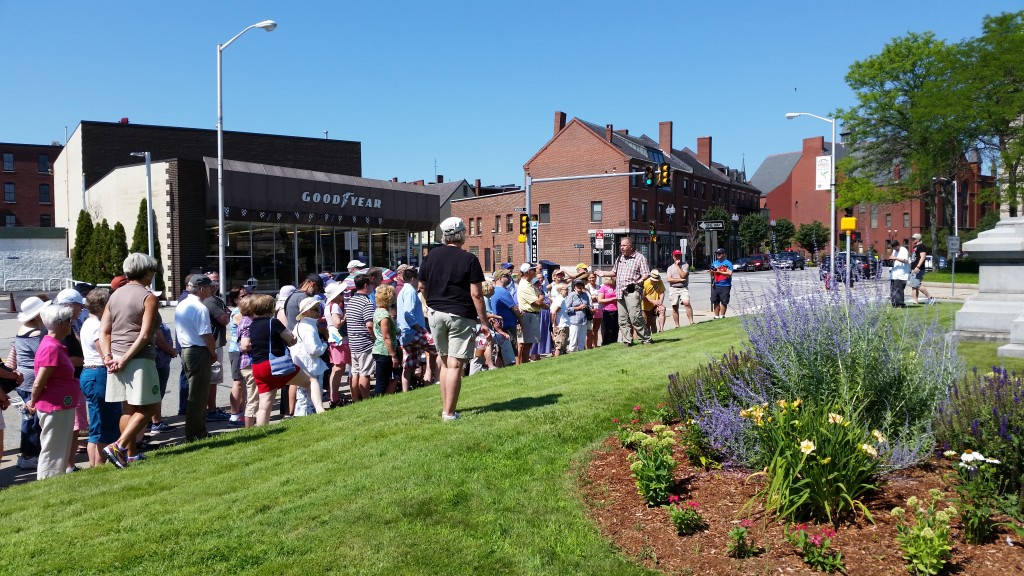 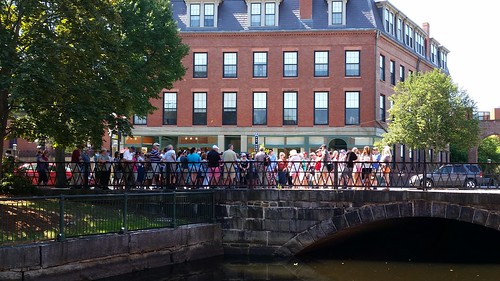 Lowell Walks resumed yesterday with Dave McKean leading the “Irish in the Acre” tour.  Dave has done this tour during Irish Cultural Week for years but had to cancel this past March due to all the snow.  Yesterday, he led a group of 129 people which broke all records for attendance.  The highlight of the tour was a visit to the inside of St. Patrick’s Church.

Next Saturday, July 18, Jay Mason, the chair of the city’s Green Building Commission, will lead a “Green Lowell” walking tour that will visit buildings and businesses in the downtown that are employing environmentally friendly construction and business practices.  The tour will begin at 10 am from the National Park Visitor Center on Market Street.

After yesterday’s walk I made my inaugural visit to Jimmy John’s Gourmet Sandwich Shop at 134 Merrimack Street.  It was clean, fully staff, impressively decorated and the food was good – a big variety of sandwiches.  So please check out Jimmy John’s. 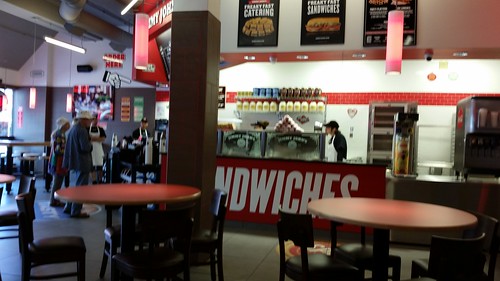 Streets around the city seemed almost deserted this past week which obviously was a popular one for getaway vacations.  The council was also off this past week so there’s not much to report from city government.  The agenda for this coming Tuesday’s meeting is available online and as s typically the case during the every-other-week summer schedule, there are quite a few motions – 16 by my count.  Some are strategic in their focus while others point to a specific issue or problem.

Some examples of the strategic type with some commentary by me:

Bill Martin asks the city manager to brief the council on the proposed process and timetable for selecting a master developer for the Hamilton Canal District.  This “master developer” would replace Trinity Financial which formerly had that role until it and the city parted ways earlier this year.  While the selection of the new master developer is an important part of this process, it seems that the Hamilton Canal District is bogged down by a couple of nagging issues.  The first is where to park the tour buses visiting Lowell National Historical Park.  They now park in a NPS owned lot on Dutton Street, but that lot is critical to this entire development.  While the NPS is willing to swap it to the city, that exchange has been held up by the bus issue.  It seems to me that accommodating the buses at the LRTA maintenance facility on Hale Street would be the wisest and most economical solution, but the LRTA seems opposed to that so a stalemate has resulted.  I won’t say that by itself is holding up the Hamilton Canal District progress, but it is a big encumbrance.  The other issue is the new courthouse.  I’ve been told that the extension of Jackson Street which should happen this summer is a pre-condition to breaking ground on the court.  I’ve also been told that ground breaking will occur in 2016.  That would be good news.  The start of a big construction project at that site could be a catalyst for other development to get underway.

John Leahy asks the manager to provide the council with an update on conventions and major events happening in downtown.  I assume this is in response to the hordes of people who descended on Lowell (in a good way) during the last week in June.  There was a multi-day convening of the Young Scientists of America at the Tsongas Arena that attracted thousands and a UMass Lowell sponsored Community Psychology Conference at the Inn & Conference Center that drew hundreds of educators for a multi-day stay.  Throughout the week downtown roads and sidewalks were jammed with people.  A couple of Merrimack Street business people I spoke with said their daily revenue was twice that of the average day for much of that week.  It really was a snapshot of what Lowell can be and what many of us want it to be.  The challenge is to sustain it.

Ed Kennedy asks for a semi-annual report regarding downtown vacancies and leasing activities.  Thriving businesses are not necessarily the norm in downtown Lowell.  There are many factors that go into it – the type of business; the operation and quality of the business; the building owner’s willingness to improve the premises rather than maximizing the place as a tax deduction.  One stretch of downtown that seems increasingly problematic is Central Street from Market up to Middlesex.  The hair school, Empire I think it is but originally it was Blaine, closed at the end of June.  Ray Robinson’s place has been vacant since Dave passed away.  The Lowell Gallery at Central and Jackson is a bright spot along that stretch and Cappy’s Copper Kettle will always be there, but otherwise there don’t seem to be many thriving businesses along that stretch.

Councilors also have some motions that are more specific in nature.  Several deal with specific traffic issues (Rita Mercier on enforcing traffic and noise ordinance at Main & Canada Streets; Councilor Leahy on paving a portion of Varnum Ave).  In the big picture of the city these might not seem very important but to the people directly affected by them they surely are.

For example, one motion that immediately drew my attention was by Dan Rourke who asks about the feasibility of installing a sidewalk on Pine Street between Westford Street and Princeton Boulevard.  Because it is right around the corner from where I live and because I have frequently traversed that stretch on foot, I think this is an excellent motion.  It refers to a relatively short portion of Pine Street, maybe 100 yards in length, but the road is narrow there and heavily trafficked because it connects too main roads, Westford and Princeton.  Houses line both sides of the street but they are set back a way.  Most importantly, both sides of the street have dirt strips running along the road that are offset from people’s front yards.  In the summer, you can walk on those dirt strips with some effort but at least you can put some distance between you and the passing cars.  In the winter, forget it.  Those dirt strips become the snowbanks and understandably, none of the homeowners shovel them because they are not sidewalks.  It creates a real hazard for anyone walking.  Emplacing a sidewalk here should not be that big a deal.  After all, it’s only a stretch of 100 yards.  But doing so would appreciably improve the quality of life for all who live in the vicinity.  I suspect there are countless other examples throughout the city of small projects which if undertaken and executed could similarly improve life for those living around them.

Exhibit on Portuguese immigrants in Lowell

On Thursday, August 6 at 5:30 pm at the Boott Cotton Mills Museum, Lowell National Historical Park and UMass Lowell will premiere a new exhibit that will feature historic artifacts of the early Portuguese community of Lowell that were recently discovered in the attic of Lowell City Hall.  Called “The Lure of the Spindle: The Portuguese in Early 20th Century Lowell” will showcase the lives of immigrants at work and at leisure.  The exhibit will run until December 1, 2015 and will be the foundation of programs and performances in the coming months that will highlight Lowell’s Portuguese community.

A Father’s Day gift I received this year was “The Quartet: Orchestrating The Second American Revolution, 1783-1789” by Joseph Ellis, the Pulitzer Prize-winning historian from Amherst, Massachusetts.   The book focuses on George Washington, James Madison, John Jay and Alexander Hamilton – the quartet from the title – and the role they played in overthrowing the system of government established by the post-Revolutionary War Articles of Confederation to form the strong, national government laid out in the Constitution.  Ellis portrays the four (and others) as skillful political operatives rather than receptacles of divine inspiration and makes a compelling argument that those who today insist on interpreting the U.S. Constitution according to the “original intent of the founders” ignore history to advance their own political agenda.  I found it a fascinating and easy-to-read book and recommend it without reservation.

I watch about an hour of TV per week total so I was surprised Friday morning to see my first political ad for the New Hampshire presidential primary.  As I waited for Matt Noyes to give the weekend weather on NECN, I spent 30 seconds learning all about John Kasich and how he’ll improve America if we only give him the chance.  Some random observations on the race thus far:

It’s unsurprising that Bernie Sanders is attracting a lot of attention.  Personally, I agree with most of what he is saying about the unfairness of the American economy and what needs to be done to fix it, but he’s too dangerous to those who run things now so once he starts gaining some stature, the mainstream media will beat him down just as it did with Howard Dean and other progressive candidates who surge to the lead early. 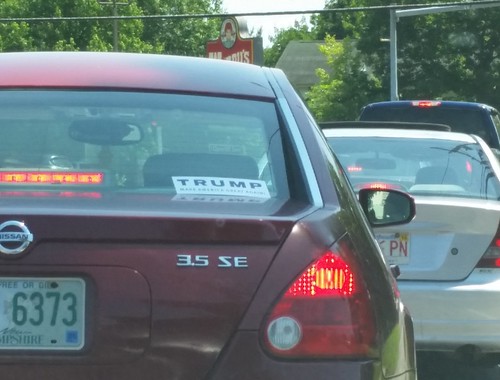 The same thing is going on with the Republicans.  Donald Trump has surged to the lead in the most recent polls because the things he’s saying are the things that the most likely Republican voters believe.  The media will give him a lot of attention now because otherwise no one else would be paying attention to the race, but he’ll be dispensed with soon enough because while the hardcore Republican voter might agree with him, the vast majority of Americans do not and his continued chatter will cost the Republicans whatever chance they have for winning the election in 2016.

I am certainly not a supporter of Jeb Bush but I felt sorry for him this week.  When he said that the key to improving the American economy is to have people work more, everyone – the media, the Democrats, and his opponents (surreptitiously) – jumped all over it.  Even if Bush really believes what he literally said (and he probably does), he’s too good of a politician to have come right out and said it.  As he said afterwards while trying to clarify his remarks, he was referring to those who are working less than full time being able to find full time employment.  I agree with that completely.  In the 21st century, Corporate America has commodified workers with little regard for what is best for the workers or their families.  It’s pure capitalism of the type practiced by the corporate titans of the 19th century until the progressive movement of the early 20th century caused government to step in and level the playing field between workers and their employers.  Because Americans so willingly ignore history, we are well on our way back to where we were in the 1800s when it comes to the place of workers in the economy.  So yes, if someone wants to work fulltime, they should be able to.  And if they do obtain fulltime work, they should also be paid a wage that allows them to live above the poverty line.