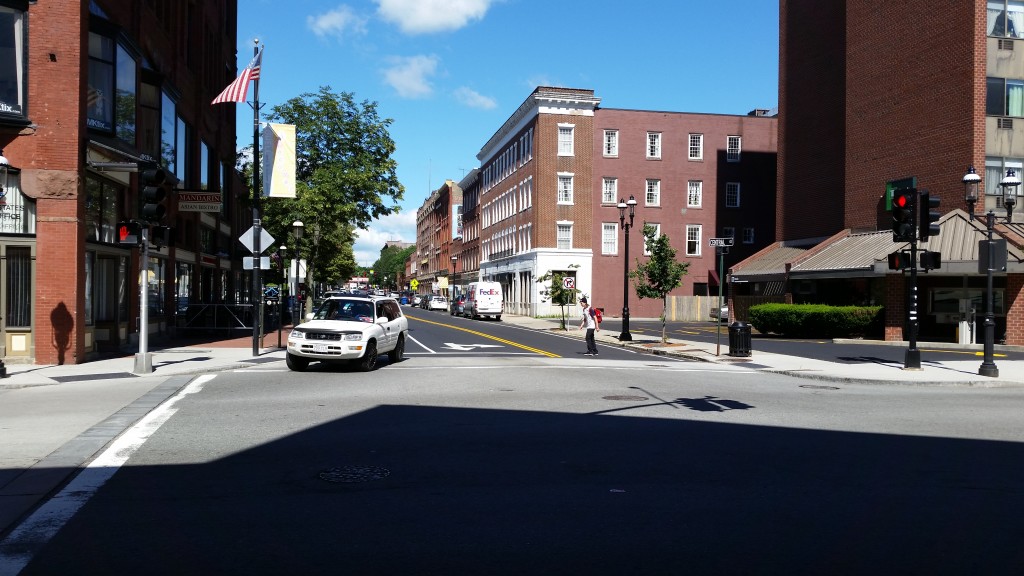 Two weeks ago saw three different million dollar plus real estate deals in Lowell (Markley Group/Prince Spaghetti; Lowell Community Charter Public School/Mill No. 5; UTEC/Central, Prescott & Warren Streets).  This week there was one deal of that scale: an apartment building at the corner of Stevens Street and Princeton Boulevard sold for $3,7 million.  Although that was the only million dollar Lowell sale, there was a pickup in real estate activity which does typically happen at the end of June.

With the good weather pretty steadily upon us, I find myself walking around downtown Lowell more often which means that I’m continuously reminded of how “road improvement projects” from years past make walking so complicated and hazardous.  The intent of these widened roads and intersections was to speed traffic through the city but try driving down Central Street at 4 pm some afternoon.  The backed up traffic demonstrates that those road improvement projects don’t work as intended.

My past choice of worst intersection to cross in downtown Lowell was Middlesex Street at Central, right alongside the Washington Savings Bank.  The biggest problem with that spot is that the pedestrian crossing light does not work.  Press the button to call for the white “safe to cross” light and it never comes on.  So to get across, you have to try to figure out the sequence of the lights and scoot across between a gap in the traffic. 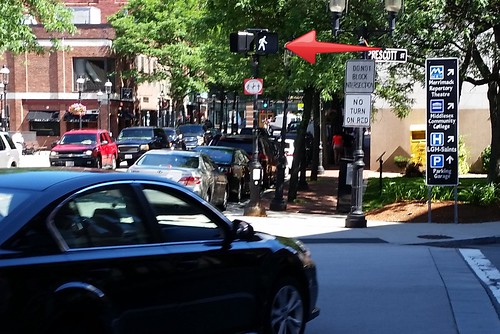 I now have a new nominee for the worst intersection to cross: Prescott at Central and Market.  Years ago when I never paid attention to the crossing lights at that intersection, it didn’t seem so dangerous to get across.  Now, when I wait patiently for the white pedestrian crossing light to turn on, I almost get run over.  That’s because the cars coming inbound on Central intending to bear right onto Prescott get a green light at the same time pedestrians crossing Central get the white light.  Given the attitude of the average Lowell driver when it comes to yielding to pedestrians, that intersection presents an extreme threat to life and limb.

At the city council meeting this past Tuesday (which I didn’t get to watch until Thursday on video), Manager Murphy said essentially the same thing.  He added that the city’s traffic engineer is developing a new light sequence at several downtown intersections that should make it safer for pedestrians.

While it’s commendable for the city to react, I fear that merely rearranging the lights will just lead to everyone – pedestrians and drivers – having to wait longer to get where they are going.  I think the present design is as it should be; it’s just that drivers pay no heed to pedestrian safety.  A few weeks of strict enforcement of the existing laws might be the best way to change driver behavior and thereby make it safer for pedestrians.

Jackson Street and the New Courthouse

Paul Early, who frequently comments on this site and is very active in Lowell, attended this past Wednesday’s Conservation Commission to see the discussion about the extension of Jackson Street and then shared with me some of the discussion that took place at that meeting.  It seems that work will soon start on the Jackson St paving project with the intent of extending Jackson Street up to Dutton but not yet breaking through and forming an intersection.  The immediate purpose of this project is to allow construction trucks to have access to the site of the new courthouse.

Speaking of the new courthouse, in last week’s Week in Review column, I raised questions about the meaning of the $5.9 million of funding for the courthouse that was contained in Governor Baker’s FY16-FY20 Bond Bill.  With $5.9mil spread over five years, I didn’t see how the courthouse could be built prior to FY20.

This week, I received a couple of indicators that suggest just the opposite; that the court is moving forward at a good pace.  One person who would know and whose information I trust assured me that the actual ground-breaking will happen next year.  The second indicator was Paul’s report from the Conservation Commission.  He got the clear impression that the state was pushing the matter because the extension of Jackson Street is a pre-condition to beginning construction of the courthouse.  Then at work, I got a call from someone working on the design of the new courthouse who asked me some very detailed questions about the registry of deeds (which is to be a tenant in the new building).  These things taken together make me feel pretty good about the future of the new Lowell Court.

Downtown Was Busy This Week

There was a lot going on in downtown Lowell towards the end of this week.  Wednesday night traffic in the city came to a standstill due mostly to an event at the Tsongas Center (formerly Tsongas Arena) hosted by the “future doctors and scientists of America.”  That conference goes through to today.  At the same time at the UMass Lowell Inn & Conference Center, an academic conference of community psychologists.  Talking to some downtown business owners on Saturday, they reported greatly increased sales that were driven by attendees at both conferences. 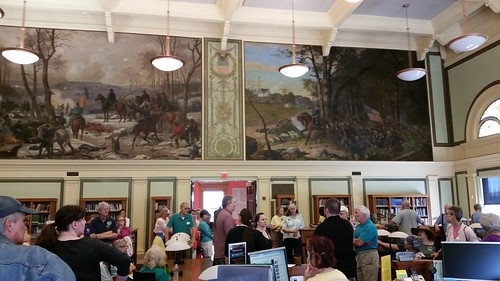 The reason I was downtown on Saturday was to attend the latest installation of Lowell Walks.  This week was Literary Lowell which was led by Sean Thibodeau, the Coordinator of Community Planning at the Pollard Memorial Library.  There were a variety of stops at which Sean shared fascinating stories about Charles Dickens, Edgar Allen Poe, Lucy Larcom, Jack Kerouac and many others.  My first count had 76 people on the tour but a few others jumped in along the way, making the total closer to 80.  That’s consistent with our weekly attendance thus far.

Lowell Walks will take a week off because next Saturday is the 4th of July but will resume in two weeks on July 11, 2015 with the Irish in the Acre tour which will be led by one of the city’s foremost experts on the Irish in Lowell, Dave McKean.  The tour will begin at the National Park Visitor Center at 10 am.

So the look of downtown Lowell over the past few days with visitors and residents roaming the streets, lounging in restaurants, and shopping in stores, is pretty close to what many had hoped could happen in the city.  It was a glimpse into the future and it looked pretty good.  There is no guarantee, however, so please do your part and visit downtown Lowell sometime soon.

Violence in the City

Last year at this time the city seemed awash in gunfire.  This week that didn’t seem to be the case quite so much although that might not be the case for those living in Centralville which saw a shooting at a playground and a violent fight that left one man in critical condition.  In both cases, the perpetrator was arrested fairly soon after the violent act.  Other incidents that drew a police response were more unusual: a mentally-ill, knife-wielding man on Market Street in the middle of the day; the SWAT team responding to Fruit Street and the state police bomb squad to Butterfield Street on Thursday and Barasford Ave on Friday.  Those latter three incidents seemed to end quietly.

Overall, this week seems to be a quieter, less violent start to summer than was the case last year.  If the opposite was true, we would be laying the blame at the feet of the city council and the city administration.  When things are quiet, they also deserve some of the credit.  Still, this is all somewhat random.  One or two wrong-doers with guns, whether motivated by drug profit or domestic issues, could shatter the peaceful enjoyment of the city for all of the rest of us.

The same might be said for the continued reduction in fire department coverage.  It seems that two fire units per shift are shut down for budgetary reasons.  That is supposed to change with the start of the new fiscal year on July 1 as more funding comes available.  Without a major fire, no one seems to notice this reduced coverage.  With a major fire, everyone will be outraged.  My point is two-fold: we have to encourage the city council and city administration to pursue a rational, evidence-based, comprehensive approach to public safety and support them when they do that; we also have to guard against being entirely reactionary when a fire or shooting does occur as they inevitably will.  The measure should be the long term wisdom of the policy and not the immediate, short-term outcome.