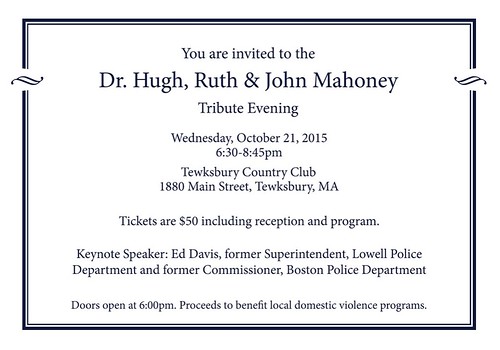 Back on January 1st I shared some memories of past New Year’s.  Most were pleasant memories; one was not.  That concerned the murder of Dr. Hugh Mahoney, his wife, and their 14-year old son in their Tewksbury home late in evening of December 31, 1975.

Here’s the portion of my post that dealt with the Mahoney family:

Just a few years later I remember hearing the frightening news that a prominent doctor, Hugh Mahoney along with his wife and 14 year old son were murdered in their Tewksbury home late in the evening of December 31, 1975.  I think three men from the Keene, New Hampshire area were eventually convicted of the murders which occurred during a burglary.

That one paragraph prompted several comments:

Dick, I remember the night of Dr. Mahoney and family’s death. My mom was a nurse manager at St. John’s and my parents were having a New Year’s Eve party. The LPD came to the house to get her and several officers that were there for the party.  Party obviously ended quickly and sadly. My mom loved Dr Mahoney….

I too remember that night of the Mahoney murders… a horrendous event in Tewksbury. Although I was a patient of Dr. Eugene Sweeney, he was away and Dr. Mahoney delivered our son Ted in May, 1971… the pregnancy was complicated at the end but the C-section birth in Dr. Mahoney’s expert hands went well… the family deaths stunned the town and the Lowell area… we heard ASAP because my Uncle Henry and Dad were at our house in Tewksbury that night… Henry got a call and told us the shocking news… it seemed unreal…

And then this, from Dr. Mahoney’s daughter, Maureen:

Thank you all for remembering my family. It’s soul soothing to hear how my Dad, Mom and John were loved.  I’m in the process of creating a fund-raising dinner in memory of my family and towards a strong movement for violence prevention. We are having our 1st meeting for the event on Feb. 18.  It will be 40 years on 12/31/2015 and not a day goes by that I don’t miss them.
Warm regards,
Maureen

After that, Maureen Mahoney and I exchanged emails.  This week, she sent news that the fund-raiser she mentioned has been scheduled.  The Tribute to Dr. Hugh, Ruth and John Mahoney will be held on October 21, 2015 at 6:30 pm at the Tewksbury Country Club. The keynote speaker will be Ed Davis, former Superintendent of the Boston and Lowell Police Departments.  Funds raised at the event will be distributed via grants to the following area non-profits:  United Teen Equality Center (UTEC), The Jeanne Geiger Crisis Center in Newburyport, The Center for Hope and Healing, House of Hope and the Michael B. Christenson Community Support Center in Lawrence.

Please save the date.  I’ll have more information about sponsorship opportunities and an address for donations.  In the meantime, Maureen is interested in hearing from people – doctors and nurses especially – who may have known her parents.  If you’re such a person, please consider emailing her at info[at]maureenmahoney.com.