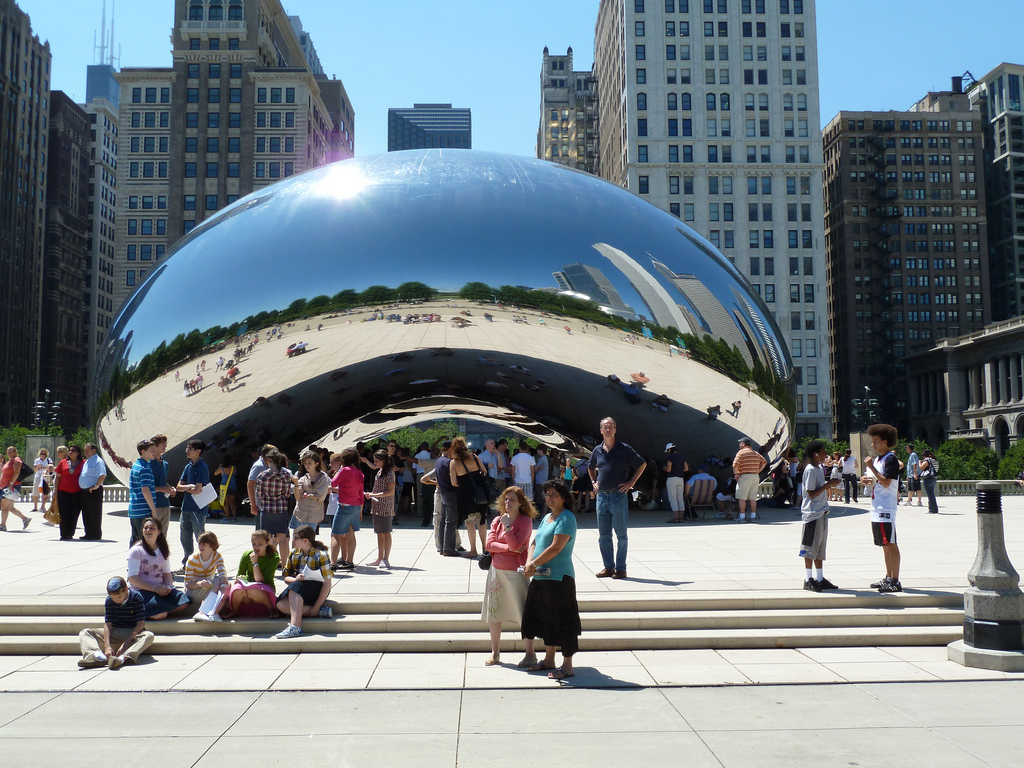 I’m back from a family vacation in Chicago, Illinois, one of the great cities of the USA. It was my first visit to a city that I associate with Carl Sandburg, Barack Obama, Studs Terkel, Albert Halper, Poetry magazine (founded by Harriet Monroe and Alice Corbin), Cloud Gate by Anish Kapoor, the Cubs and Blackhawks, skyscrapers, Ferris Bueller, The Fugitive with Harrison Ford, and the Democratic Party’s 1968 national convention. All this and a lot more was packed into three days on the ground on the shore of Lake Michigan. I came back with some observations about what we in Lowell might learn from Chicago’s way of presenting itself as a city, no matter the vast difference in scale. Certain lessons can be customized for a smaller historic city and do us some good.—PM

1. Mark your special buildings. The Chicago Landmarks Commission has a program of simple building plaques fabricated in durable materials that provide basic information about historic buildings (name, date, when built, when restored, purpose, architects, developers). Lowell could do this now. A friend of mine from London who teaches “urban regeneration” said Lowell could add another whole layer of public story, the revitalization, by marking the preserved buildings, which would not only raise the profile of the world-class preservation work but also draw in another segment of visitors.

2. Do more with the waterways. The Chicago Architecture Foundation and a few other groups offer daily guided boat tours of the city on the Chicago River, which runs from Lake Michigan (Chicago’s waterfront) through downtown (The Loop) and branches in two directions, eventually connecting to the Mississippi River. Like Lowell, much of the old building stock backs up to the river, but the recent adaptive reuse of commercial buildings now emphasizes the water view, especially with new residences outfitted with balconies. Chicago is also in the midst of building about 20 miles of a river walk on both sides of the river, which is not wide at any point downtown (maybe half the width of the Merrimack River where it swings around our downtown). The boats, which hold about 200 people, were loaded on the sunny day we were on board. On the residential boom in downtown Chicago, there are now about 150,000 people living in the upscale waterfront area, with more buildings planned (one at 96 stories)—and this is a new phenomenon in the past 20-25 years.

3. Give people beautiful, clean parks with ambitious public art, flowers, and active-living features. There is no better example of a successful public space in the USA than Millennium Park in Chicago. The crowning glory of this fairly new park is the most successful work of public art I have ever witnessed, Cloud Gate by Anish Kapoor, a wondrous shiny object that is a cosmic selfie-generator for the city, the sky, and all who come near. Its appealing organic shape (nicknamed “the bean” by locals) and ever-changing surface make this sculpture new every minute. Several other monumental artworks, including a fountain colored by light after dark, contribute to the park’s personality. There’s a large outdoor performance venue, acres of flowers and prairie plantings, extensive children’s play areas, wide lawns, a serpentine bridge that could be a model for making the connection across Thorndike Street (from Dutton Street to Middlesex Street and Western Avenue), two-story climbing walls in the form of multi-sided sculptural blocks, and more. Maintenance and security workers were highly visible on a Sunday when we walked through.

4. Put your museums up front in your tourism promotion. Again, by comparison the scale is not fair, but the concept is applicable. Chicago boasts about its world-class museums: The Art Institute of Chicago and Field Museum of Natural History being the two most prominent. For the 40 million visitors to Chicago each year, the museums are high on the priority list of places of visit. We saw an all-star list of masterpieces at the Art Institute and met “Sue” the T. Rex at the Field Museum. The surprise of the visit was the Chicago Cultural Center, an exhibition, performance (small), presentation, and educational space, including offices for groups like StoryCorps, in a stunning restored building that was once the public library. And like a public library, the City of Chicago opens the doors of this Cultural Center to all for free every day. We saw exhibits of paintings of the 1920s-1930s jazz-era by African-American painter Archibald Motley; the distinctive graphic art of Valmor Products, a beauty product maker in the city from 1920 to 1980; and documentary photographs about preserved architecture in the city. The morning we were there, a crowd was gathering for a free concert by high-school musicians that was a tribute to Louis Armstrong. The building also houses offices for various community organizations and services. On a Lowell-scale, the Smith Baker Center has the potential to do some of the things that are being done in the Chicago Cultural Center. Also, being across from our Pollard Memorial Library, there’s a nice public library link in our city, too.

5. Give people a view of the city from above. At least two of the immense skyscrapers (Hancock Observatory/360 Chicago and Sears/Willis Tower)have top-floor viewing that is mind-blowing and not for those of us who get weak in the knees at that height. At 360 Chicago, a person can actually lean out over the edge in a tilting glass encasement. I could hardly look at those looking down. Lowell is a low-lying city. Fox Hall, Merrimack Plaza, Cross Point, the old SUN building—these are among the high-rises. Because of the historic city plan with the mill layout and canal system fed by the river, Lowell’s urban plan is best understood via an aerial view. It would be great to have some place open to the public where people could take in the arrangement of the city, some high place we could call “Above Lowell” or something. People like being in the bird’s nest. Where could we do this?

6. Push the world-cuisine menu of your city. Chicago is an ultra-ethnic city with something like 80 sub-neighborhoods and a plethora of peoples from every race and nationality, all of whom brought their food to town. This is one of Lowell’s strengths. We can do more with this natural resource of world foods and American standards.

7. Put on a good face. Everywhere we went we met people who were glad to see the visitors to their city. “Welcome to Chicago,” one businessman said on the sidewalk outside our hotel, after using our camera to take our picture with a friend who was showing us around.