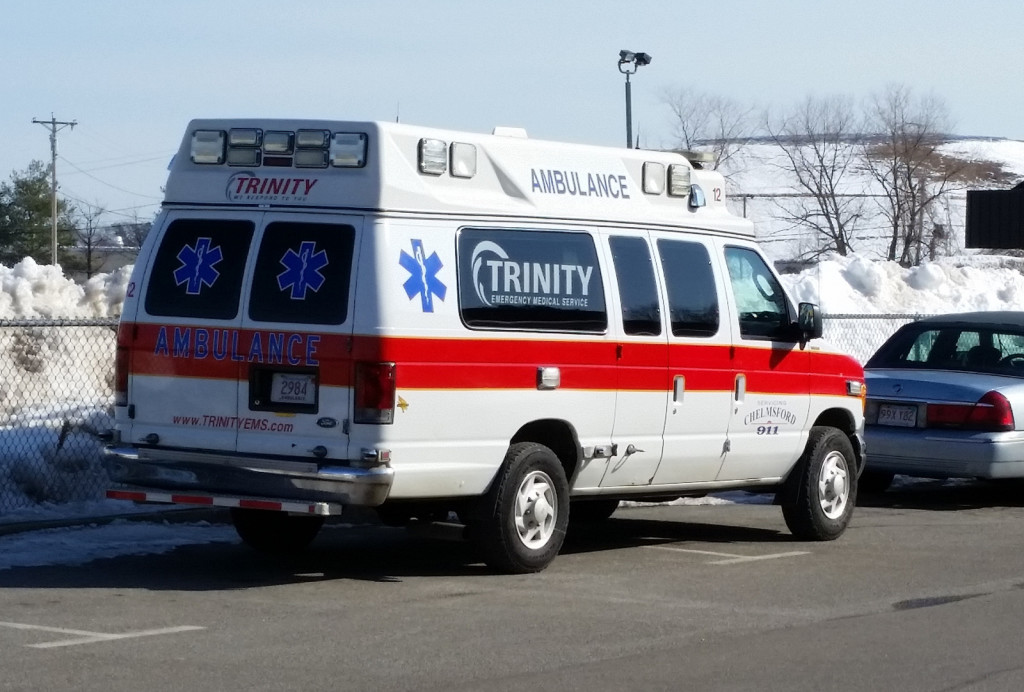 Jack’s Corner at the Pollard Library 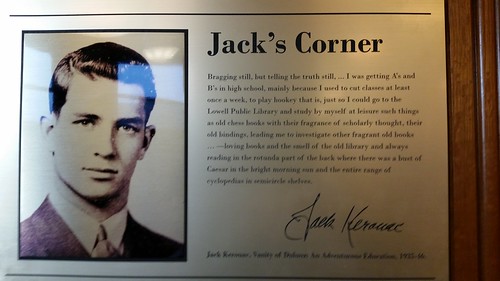 Yesterday afternoon at 3pm about 40 people gathered on the first floor of the Pollard Memorial Library to dedicate “Jack’s Corner.”  David Amram, who first met Kerouac in 1956 in New York City, said that Kerouac knew more about more things than anyone Amram had ever met.  Asked to explain is wide and deep knowledge base, Kerouac attributed it to the many days he spent reading in the Lowell Public Library.  Amram went on to say that Kerouac was a true intellectual and a great scholar.  As evidence of that, he pointed to “Atop an Underwood” (2000), a collection of 60 previously unpublished works that Kerouac wrote before he was twenty-two.  Our co-blogger, Paul Marion, edited Atop an Underwood which is available on Amazon and elsewhere.

Paul became a key party in the creation of today’s event by donating 400 books of poetry to the Pollard Library.  The books are shelved in a section called “The Young Prometheans Poetry Collection” which is immediately adjacent to the area once occupied by Kerouac.  And Kerouac occupied that space for a considerable amount of time.  According to Roger Brunelle, a member of Lowell Celebrates Kerouac, during his junior year at Lowell High, Jack was absent 32 days; during his senior year, it was 44 days.  All of them were spent at the library, a place he frequently referred to as a temple.

Kerouac himself documented the importance of the Lowell Public Library in this passage from his book The Vanity of Duluoz (which is also printed on the :

Bragging still, but telling the truth still, . . . during all this time I was getting A’s and B’s in high school, mainly because I used to cut class at least once a week, to play hookey that is, just so I could go to the Lowell Public Library and study by myself at leisure such things as old chess books with their fragrance of scholarly thought, their old bindings, leading me to investigate other fragrant old books . . . loving books and the smell of the old library and always reading in the rotunda part of the back where was a bust of Ceasar in the bright morning sun . . 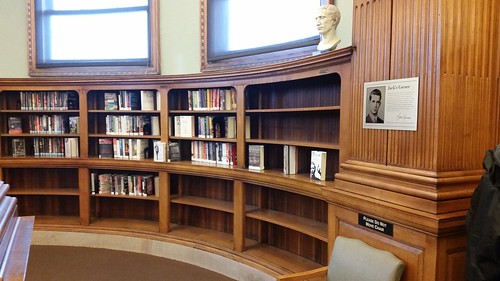 Yesterday’s event was ably organized by Sean Thibodeau, the library’s Coordinator of Community Planning who also served as the Master of Ceremonies.  Also speaking was Bill Walsh who gave a brief history of the library and Mayor Rodney Elliott, who read a citation from Governor Charlie Baker which proclaimed that March 12, 2015 (Kerouac’s birthday) would be “Jack Kerouac Day” throughout the Commonwealth of Massachusetts.

Also in attendance at today’s event were City Councilors Rita Mercier, Corey Belanger and Bill Samaras; School Committee member Dave Conway; State Representative Rady Mom, Library Trustee Marianne Gries; Pollard Memorial Library Foundation board members Mary Johnson-Lally and Rosemary Noon; many members of the library staff and Lowell and area residents; and one young woman who is writing her PhD dissertation on Kerouac at Laval University in Quebec who, while waiting for the ceremony to begin, engaged in a friendly conversation about snow and its removal, politely observing that Quebec City seemed to have the snow removal drill down better than Lowell based on what she has seen during her visit thus far.

Gunther Wellenstein, Lowell’s Recycling Coordinator and Solid Waste Manager, is a finalist in for MassRecycle’s 20th Annual individual recycling award.  Please go to the MassRecycle website and give Gunther a vote. 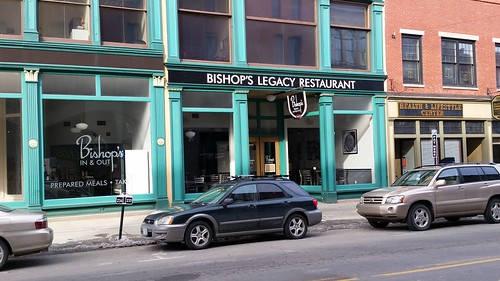 Walking down Merrimack Street yesterday, I was pleased to see that Bishop’s Legacy Restaurant looks almost ready to open in the old La Boniche space.

When I visited Mill No. 5 yesterday, I snapped the below photo while standing on Jackson Street aside the mill, facing to the west.  That building in the center with the small tower rising towards the sky is Western Avenue studios.  As you can see from the picture, it’s not very far away but because Thorndike Street poses such an obstacle to pedestrians, Western Ave might was well be in the next county.  Whatever else occurs with the upcoming “remake” of the Lord Overpass, finding a safe and convenient way to walk from Mill No. 5 to Western Ave should be a top priority. 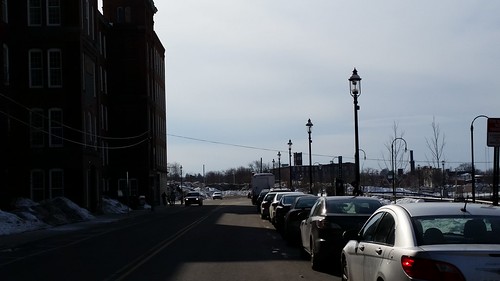 Mill No. 5 to left, Western Ave Studios in center. Jackson St in foreground

Also while at Mill No. 5 yesterday, Peg Shanahan shared with me the below photo which she took for the 1977 University of Lowell yearbook (called the “Sojourn.”  The photo is taken from the Lord Overpass looking north on Thorndike towards the intersection with Dutton which I think is off to the right and resembles a parking lot more than an intersection street.  This was before the realignment of Dutton and Thorndike into the highway-like structure that it is today (and which is named the Sampson Connector).

The U Lowell yearbook has some interesting text accompanying this photo.  It’s a story by Randall Hecht, class of 1977 advocating Group Rapid Transit for Lowell.  Here is some of what it says:

Group Rapid Transit consists of electrically propelled cabin-like vehicles that can transport up to 20-25 people per vehicle at 30 mph.  These vehicles cruise on elevated guideways which can span a variety of configurations . . .

Considering the sky-rocketing costs of car ownership, Group Rapid Transit is an attractive form of public transportation that can approach and exceed present automobile use, which is so highly valued by the American public.  It would undoubtedly make transportation through Lowell safer and easier for all University of Lowell students and personnel.

Seems ironic that nearly 40 years ago, young people in Lowell were complaining about Thorndike and Dutton Streets and were advocating better mass transportation.

Although the local real estate market is still sluggish, there have been two million dollar plus sales in the city over the past two weeks.  A week ago Friday, Market Basket purchased the J.J. Boomers property at 693-705 Pawtucket Boulevard (at the corner of Old Ferry Road) for $1.3mil.  I understand that Boomers will continue in business but that Market Basket will build a grocery store further back on the same lot.  This Friday, the U.S. Post Office sold its Phoenix Ave facility to 137 Phoenix Ave LLC for $2.3mil.  According to the Secretary of State’s website, the manager of 137 Phoenix Ave LLC is Pavlos Athanasiadis and the resident agent is George Athanasiadis, both with an address of 3 Esquire Road in Billerica.  I’m not sure what’s in store for the property which is kind of hidden away off Rogers Street.

Also on the good news front, Bishop’s Legacy Restaurant looks close to ready to open in the former La Boniche space on Merrimack Street.  I peeked in the window yesterday and saw people who looked more like restaurant staff than contractors working inside.  The furnishings and exterior signage are all in place although I didn’t see any “Opening on . . . . “ signs. 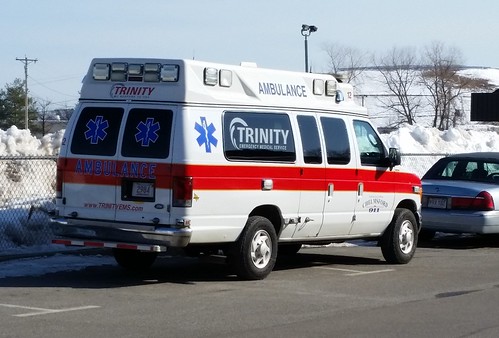 Everyone in Lowell knows a family, often more than one family, that has lost someone to drug addiction.  Most everyone has an opinion about why this is so, but such opinions, however, logical, don’t always match reality.  The city council got a heavy dose of reality last Tuesday night during a presentation on the city’s opioid epidemic from Health Department Director Frank Singleton and John Chemaly of Trinity EMS during the regular council meeting.

In discussing the causes of this epidemic, Singleton repeatedly returned to the overprescription of powerful pain killers by doctors.  He said that the powerful pain killers that now get people hooked weren’t available ten or fifteen years ago.  Besides being available now, doctors are prescribing them in amounts far in excess of what is needed to control pain, according to Singleton.  He said the pathway is pretty well known: a person gets hurt at work, gets prescribed a large amount of prescription pain killers, gets hooded on them, and when he can’t afford to buy them on the street, he turns to cheaper but more dangerous heroin.  Singleton went on to say that if 25 people were had already died from meningitis this year in Lowell, there would be an uproar and concerted action but because that many deaths have been caused by overdoses of opioids, no one seems very excited.

The verbal report by Chemaly and Singleton was accompanied by a written report prepared by Trinity on the company’s response to overdose calls and to the number of deaths attributed to opioids.  The report is supposed to be made available on the city website but for now you can download it as part of the March 2, 2015 meeting packet.

The written report had data overlaid onto maps of the city, but I’ll put some of the most important points here in narrative form.  First is the number of Trinity EMS calls where the chief complaint was overdoes (excluding alcohol).  In 2012 there were 599 such calls; in 2013 there were 693; in 2014 there were 917.  The calls came from across the city.

Of the 2209 overdose calls from 2012 through 2014, here are the numbers that came from each neighborhood:

The councilors all seemed sincerely interested in taking steps to address this problem.  The next step is a subcommittee meeting on the topic.  That hasn’t yet been scheduled but we’ll report its date, time and place as soon as it is.