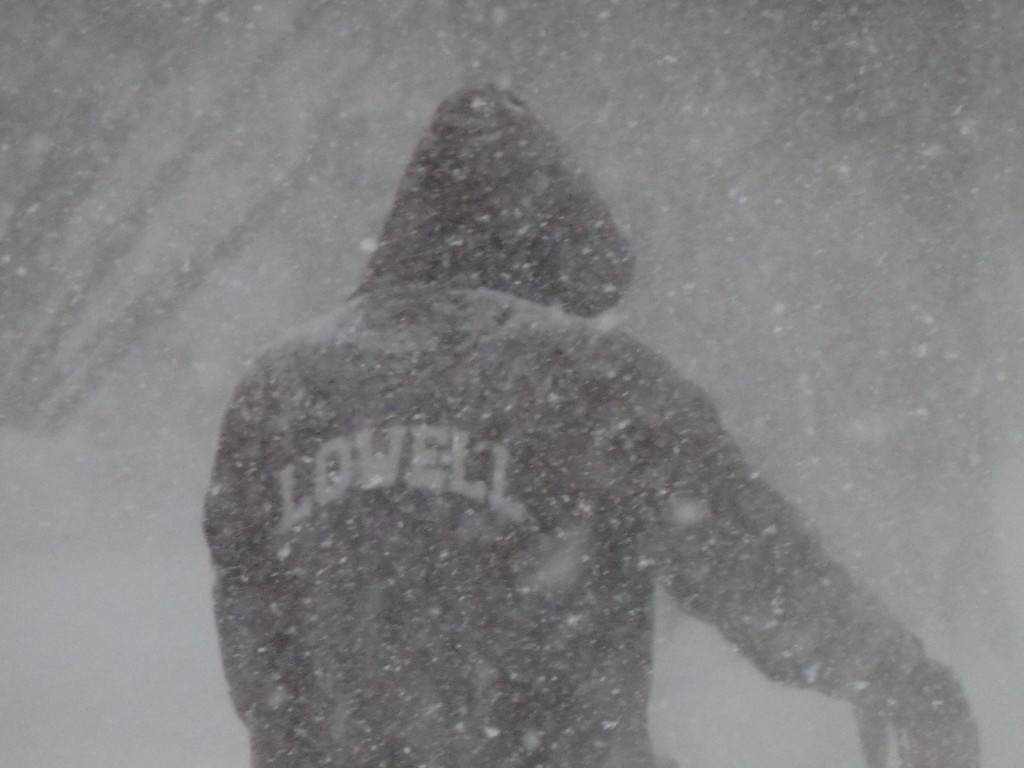 Lowell: The Hottest Town in Massachusetts?

It is for volume of home sales, at least according to CBS Boston.  Citing a report from Waltham-based McGeough Lamacchia Realty Inc., CBS Boston had Lowell with a 9.5% increase in home sales from 2013 to 2014 followed by Scituate (9.3), Waltham (8.9), Centerville (8.6) and Chicopee (8.3) to fill out the top five.

Here’s what the original report said about Lowell:

Lowell tops our list with 955 home sales for 2014, an increase of 9.5% compared to 2013 when there were 864 sales. Lowell is an affordable place to live with a median price for a home at $202,000, an increase of 6.3% compared to 2013. Lowell is a busy community located in Middlesex County at the intersections of Routes 3 and 495, making it an excellent commuter location. It’s just 45 minutes by car to Worcester, roughly an hour and a half to both Hartford, Connecticut and Providence, Rhode Island, and 45 minutes to Boston. Lowell has open recreational space and parks, as well as cultural attractions such as events taking place at the Tsongas Center on the UMass Lowell campus in-town. The population of Lowell is 108,522, an increase of 1.7% since 2000. The residential tax rate in Lowell is $15.48 per $1,000 of assessed value.

I watch real estate pretty closely but confess that Lowell’s position on this report came as a surprise to me.  My own research shows an increase in the number of sales in Lowell of 6% but that’s without regard to the use of the property (i.e., it also includes commercial real estate).  Consequently, I would not dispute the 9.5% increase figure.

Another piece of good news (for most) is that the median price of home sales increased last year, going from $194,900 in 2013 to $205,000 in 2014, an increase of nearly 6%.  That means that values are rising.  While that can also mean a higher tax bill, complaining about that is a bit short sighted when it comes from overall appreciation in value of one’s home.

Notwithstanding all of this, I would still characterize the local real estate market as sluggish.  The sellers of many of the properties that sell these days are long-time owners who have ample equity and who are down-sizing due to age or health-related factors.  Oh, and many of the sellers are also banks who acquired the property through foreclosure.  Speaking of foreclosures, there are still plenty of them; 82 in Lowell during 2014.  Most of the mortgages being foreclosed originated in 2006 or 2007 when the market was at its peak.  The owners of these homes were still deeply underwater on their mortgages and any disruption of family revenue from things like job loss, divorce, illness or death, likely pushed them into foreclosure.

This same circumstance – so many homeowners having little or no equity in their properties – is the main hindrance to a revival of the real estate market.  With no equity you can’t refinance and you can’t sell; you’re pretty much stuck where you are.  If you can keep up with the payments, that’s not a big deal because eventually you’ll pay down the mortgage as the home value rises.  At some point the debt and value lines will cross and equity will be a positive number but until that happens for a critical mass of people who bought when the market was at its peak, real estate will remain listless. 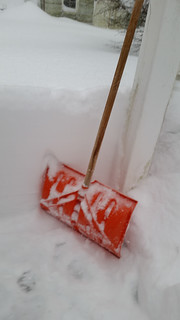 I thought the city did a pretty good job of clearing the snow after the succession of storms that hit us during the past two weeks.  There are only so many places where you can put the stuff.  Still, with snow banks narrowing roads and eliminating so many curbside parking spaces, getting around becomes more difficult.  That makes people late which causes them to rush which makes it even more dangerous for pedestrians forced out into the streets because so many sidewalks haven’t been shoveled.

Clearing sidewalks on the agenda at Tuesday’s City Council meeting.  While discussing a motion by Councilor Milinazzo for a report on the post-snowstorm sidewalk cleanup process, Eric Slagle, the head of the city’s Department of Developmental Services, said that homeowners have 12 hours to remove snow from sidewalks adjacent to their properties.  He said that city inspectors and police officers can issue citations for violations but the city does not actively hand out these citations.  Instead they respond to complaints received from other citizens.  He said they try to balance challenges faced by home owners with the requirements of public safety.

Councilors Kennedy and Mercier both raised the issue of senior citizen home owners who are not physically able to remove snow themselves and not wealthy enough to hire someone at the market rate for snow removal.  There was (and perhaps still is) a program for Lowell High students to volunteer for snow shoveling but it seems to be something that requires extensive and intensive planning to make it work.  Up until now, the snow has come so sporadically that other demands on people’s time has kept the snow shoveling program a lower priority.  It’s a big undertaking that can’t magically happen without the commitment of substantial resources.  If it keeps snowing, maybe we’ll collectively decide it’s worth the cost but I’m not sure we’re there yet.

But not everyone who fails to clear their sidewalk is infirm or indigent.  Some of the worst offenders are homes that have commercial snow plows clear their driveways and in the process of doing so, pile the snow from the driveway right in the middle of the sidewalk adjacent to the driveway.  To me, that’s a more egregious offense than just leaving the snow that fell in place, since the bigger piles will continue to block the sidewalk long after natural accumulations have melted.  These home owners have demonstrated the financial means to hire someone to remove snow; they just don’t care about the safety of pedestrians.  People in this category would seem most deserving of a fine for violating the ordinance.  Perhaps the council should also amend the ordinance to include a fine for private snowplow operators who block sidewalks with snow they’ve removed from a private driveway.

The other group that deserves little sympathy is absentee landlords.  We learned during the foreclosure crisis that those who live and work elsewhere but own property here will do nothing for the common good unless faced with measures as drastic as losing their property through the receivership process.  Maybe some of the tactics the city used during the foreclosure crisis should be tried with absentee owners who neglect snow removal.

I’ve written at length about the need to make the Dutton Street corridor more pedestrian friendly.  That topic will be discussed on February 24, 2015 at 5:30 pm in the City Council Chamber by the Transportation Subcommittee.  Anyone interested in this issue should plan to attend that meeting.

The potential economic benefit of fixing this problem was made clear to me yesterday.  It was the first Saturday of the month so Western Avenue had its Open Studios and Mill No. 5 had its monthly bazaar.  I visited Mill No. 5 first and as I stepped onto Jackson Street when leaving the mill, I looked to my left and there stood Western Avenue Studios.  I could see it.  If the wind was right I could probably hit it with a baseball.  I just couldn’t walk to it.  Dutton Street and the railroad line stood as impassable obstacles. 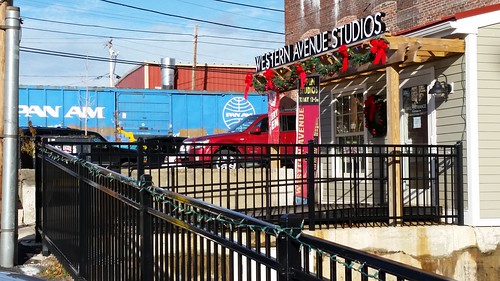 I walked back to the Edward Early garage, retrieved my car, drove Middlesex to School to Western Ave and eventually made it.  There’s something like 245 artists at Western Ave.  Each of them is a small business.  Small businesses drive the economy.  Why do we persist in making it so difficult to patronize these small businesses?

And it’s not just Western Ave.  There are the many Southeast Asian restaurants and businesses that are packed in the lower Highlands.  There’s the Textile History Museum and the Whistler House and the ALL gallery, each of them on the wrong side of Dutton Street.

With the continued build-out of the Hamilton Canal District, I believe that the center of gravity of downtown Lowell is shifting from Kearney Square to the end of Jackson Street.  Even under the existing Lord Overpass plan (which I maintain can be greatly improved), Jackson Street will tie into the end of Fletcher.  The South Common is two blocks away.  So is the Gallagher Terminal.  There’s huge potential within a pretty tight radius.  Getting the Lord Overpass – Dutton – Thorndike Street redo right will be a giant step forward in realizing that potential.