The KhmerPost USA, Lowell’s Cambodian language newspaper which circulates up and down the East Coast, held another of its Press Club events today at Lowell Telecommunications Corp.  Roger Pin, a co-publisher of the paper, explained that he began these Press Clubs back in 1994 when he was the President of the Cambodian Journalists Association.  The purpose was and is to bring people together to communicate about issues that affect them.  Roger and his co-publisher (and spouse) Soben Pin have been very successful in transplanting Press Club to Lowell by inviting elected officials to attend, to listen to remarks by members of the Lowell Cambodian community, and to respond to those remarks.

Soben Pin introduced education as the first topic by stating that 32% of the 3000-plus students at Lowell High School are Asian and that 67% of all LHS students come from low-income families.  A gentleman named Pan So who has been a teacher at Lowell High for 27 years spoke about the need for more intensive assistance for Cambodian students.  He said that the life of young people passes too quickly to delay.  He also used today to announce his candidacy for the Lowell City Council in this year’s city election. 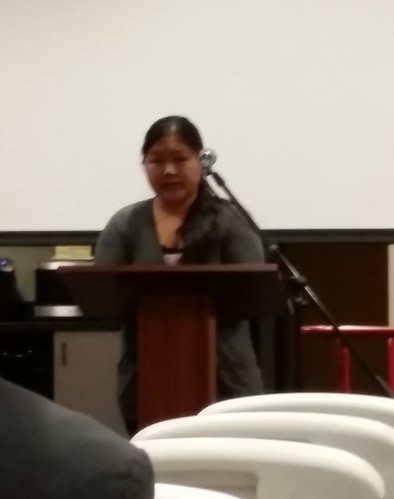 The next topic was small business.  The main speaker was Lee Many Pho, the owner of Little Delights Bakery on Merrimack Street.  Lee explained that she came to Massachusetts as a young girl in 1984.  Her family settled in Quincy and then Brockton.  She mentioned that neither of those cities had many Southeast Asian residents so when she finally made it to Lowell, seeing so many Southeast Asian people in one place was a new and exciting experience for her.

Lee explained that she went through college intending to go into an entirely different field and when she decided she wanted to start a small business, everyone around her tried to discourage her, saying it would be much easier to work for someone else.  Owning her own business has been hard work but she enjoys it very much.  She said every kid is different and high school students shouldn’t be nudged into vocational and technical training at the expense of their dreams.  She said young people should be encouraged to pursue their dreams, especially if they are entrepreneurial.  She emphasized that those are the kids we should be trying to retain in Lowell, saying “let’s keep all of our treasures here.”  She said the entire experience has inspired her to help Cambodian kids as a mentor and role model.

Several follow-up speakers responded to Lee.  Kevin Coughlin asked how the city could do more to increase customer traffic between established businesses like Cupples Square and those in downtown (“downtown needs and Asian Business Association like Cupples Square has”).  Karon Bergeron from the Chamber of Commerce asked what the Chamber could do to assist (“Marketing is a new concept for many Cambodian business owners”).  And Captain Richardson said he hoped to speak with Lee afterwards about the perception she and her customers have about safety in downtown Lowell. 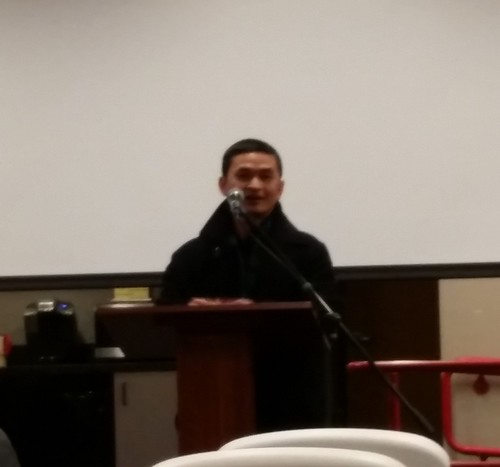 The next speaker was Adam Pril of the Asian Business Association who also owns One World Pharmacy which is located on Parker Street.  Adam was a speaker at this event last year and most of his remarks then concerned the difficulty he had experienced in navigating city requirements when opening his drug store.  A year ago that kicked off a dialogue between Adam and the city councilors in attendance who vowed to address the problem.  It seems like they did because Adam’s remarks today were completely positive of city government.  He learned and his fellow Asian business owners have learned that the city cares about them and will help them.  He says business owners welcome visits from city officials who say hi and to ask how things are going.  He looks forward to continued good relations with city government. 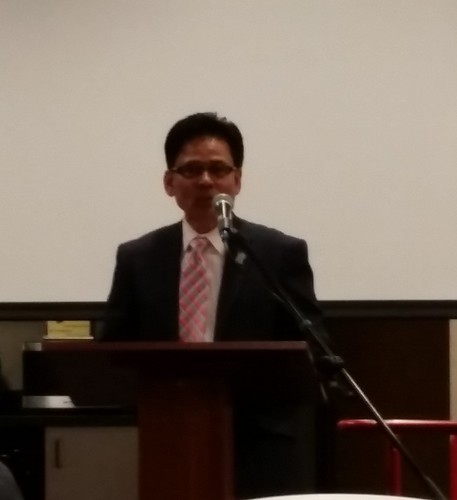 Paul Ratha Yem spoke about rental housing.  He said the two big issues are safety and affordability.  He cited a sharp rise in rents from 2013 to 2014 as placing a great deal of stress on families, forcing some of them to “double up” with relatives.  Such arrangements might violate zoning ordinances and increase safety hazards but the people feel they have no choice.  He acknowledged that Lowell has a lot of affordable housing but made a strong case that there is a need for even more.  He said that when he hears people say “we need market rate housing that attracts people with money to spend” he understands their motive in saying that but he also feels very strongly that the all the people living at the poverty level are members of our community too and they need safe and affordable places to live.

Mayor Elliott opened his remarks by recalling the tragedy of last summer’s Branch Street fire.  As regrettable as that was, he said the aftermath of the tragedy did bring the Cambodian community and other city residents closer together.  He said a great challenge the city faces is to integrate leaders from the Cambodian community into leadership positions for the entire city, especially as members of the city council and the school committee.  He said we need more Cambodian businesses downtown, more Cambodian residents involved in their neighborhoods, and more Cambodian parents involved in the schools.  The Mayor said that his recent trip to Cambodia was “the trip of a lifetime” and urged anyone who can undertake the journey to do so.

Representative Tom Golden echoed Mayor Elliott’s remarks by talking about the value of an earlier trip he made to Cambodia.  He also addressed the housing issue by observing that many people who lost their homes during the foreclosure crisis and now renters which puts additional demand on rental units and drives up rents.  He emphasized that everyone should have a safe and clean apartment and urged anyone lacking in those to contact city hall.

Kevin Coughlin amplified Mayor Elliott’s observation on the desire for more leaders of the Cambodian community to come forward and commended Adam Pril for his leadership in the Asian Business Association.  He also told everyone that if there is an issue of concern to them, they should bring it to city government.  If the city doesn’t know there’s a problem, there is no way to address it.

With that the lunchtime gathering wrapped up.  Thanks to the KhmerPost USA for once again hosting a valuable exchange of thoughts and ideas between members of the Cambodian community and representatives of city government.