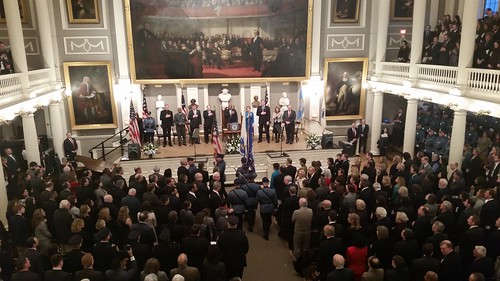 Posting the colors in Faneuil Hall

At a dignified and classy ceremony at historic Faneuil Hall last evening, Maura Healey took the oath of office as the 55th Attorney General of the Commonwealth of Massachusetts.  The oath was administered by Ralph Gants, the Chief Justice of the Massachusetts Supreme Judicial Court who was joined on stage by Governor Charlie Baker, Lieutenant Governor Karyn Polito, House Speaker Robert Deleo, Boston Mayor Marty Walsh and Master of Ceremonies Mo Cowan.  The hall was packed to capacity with Healey supporters, attorneys and employees of the Attorney General’s Office, and many public figures including State Treasurer Deb Goldberg, former Governor Bill Weld, former Senate President Tom Birmingham, and (as of last night) former Attorney General Martha Coakley. 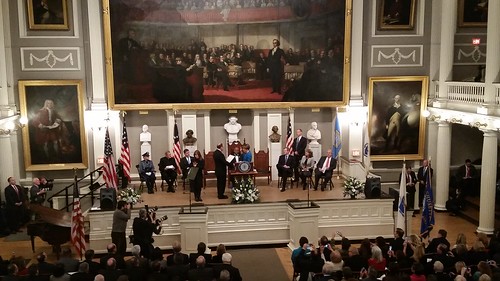 Healey vowed to take on the tragedy of opioid and heroin addiction along with gun violence, domestic abuse, sexual assault (particularly on college campuses) and emphasized her determination to hold for-profit-colleges and the gaming industry accountable and compliant with the letter of the law.  The substance of Healey’s speech was wonderfully captured in this story in today’s Globe by Stephanie Ebbert. 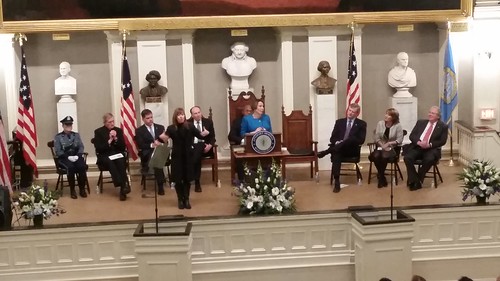 While Healey is seen as a rising star within the ranks of the Massachusetts Democratic Party, her record as a lawyer, both in private practice and as an assistant Attorney General, has been to put the law above politics.  I believe that is exactly what she will do as our new Attorney General and if she does that, the politics will take care of itself and, more importantly, we will all have a better Commonwealth to live in.