The following comes from Maxine Farkas at Western Ave Studios:

This year is the 20th anniversary of Lowell Women’s Week and our theme this year mirrors that of International Women’s Day . . . ‘Equality for Women, is Progress for All’.   In thinking about a project for Public Art  we came to the idea that it is difficult to ignore someone you know and that knowledge can encourage equality and thus progress.

In order to broaden understanding of our lives we are asking you to be a voice for women by telling us your story.  Your story can be serious, nostalgic, emotional, humorous whatever you need it to be to offer a bit of your voice to the story of Lowell’s women.  Your story can be written, a drawing, a collage, there are only three restrictions, it can’t be larger than 8 ½ x 11 (or 11 by 8 ½ if you like), has to be 2D (it will hang in a window downtown during Women’s Week) and you may not use glitter (too big a mess for the people who let us hang your stories in their windows!).

In thinking about what to tell, consider what you feel might best describe who you are and perhaps who or what made you who you are.

“I must have been in my early thirties. I had been painting for most of my life and professionally for about 10 years at that point. It was a very nice Miami evening, Gallery Night, where all the galleries in Coral Gables were having openings and a small city bus would drop people off at different galleries while they sipped wine and hopped from art show to art show. I was having a one woman show in one of these galleries. I have always liked to stay incognito during my shows so that I can listen to the true reactions of the viewers. That night was no different. I had made a point of telling the gallery owner not to present me as the artist. I have always signed my painting Alés, my last name, and enjoy the idea of not representing a gender.

By mid evening there was a possibility of a sale. A couple had become interested in one of the largest, most expensive paintings. The gallery owner asked for me, excited to introduce me to the potential buyers. I did not know that at the time. As I walked into his office, I saw the couple ready to buy the painting. The wallet was out but the next thing that happened both astonished and insulted me. Once they realized that Alés followed the name Angela and that I was a woman, the deal was off. The couple explained how they did not invest in women’s art. They believed that if I ever chose to have children my priorities would change and I would stop producing art, making my paintings worthless. Unfortunately this was not the last time I encountered this philosophy. I have even had people tell me that they thought my artwork was painted by a man because it was strong. What does that even mean? Still, it makes me feel impotent to be stereotyped and repressed.”   (This is the story that inspired Be A Voice!)

“This is my Lowell and beyond story. I was born in Providence R.I. and spent my childhood in several different places, mostly in Western Pennsylvania and New England. I went to college and studied Linguistics and Romance Languages, then I went to law school and became a lawyer. I worked for myself, raised four children, and taught at Middlesex and now at UMass Lowell and the University of Maine. I am a fiber artist, one of the very first members of the Arts League of Lowell, one of the first tenants of Western Avenue Studios as part of the original 8 artists of the Lowell Fiber Studio. I served on the Lowell Cultural Council and was chair for a year before I moved to Canada. I sang in St. Michael’s choir and taught Spanish at St. Michael’s School on Christian Hill. I lived in Lowell for 23 years until the 2008 recession. My husband lost his job, and we emigrated to Canada so he could work in his field. We traded living in the city for a life in the country. We live in a new house now, surrounded by farm fields. We have 5 acres of land and we can see the ocean at the top of the hill. We have 3 horses, other animals, and lots of peace and quiet. We don’t have to lock our doors at night. I have to say I really love that. I enjoy keeping up with the cultural news in Lowell. I volunteered a lot of hours to help make a lot of it happen, and I miss not being there to enjoy the results. I love where I live, but sometimes I miss life in the city.” 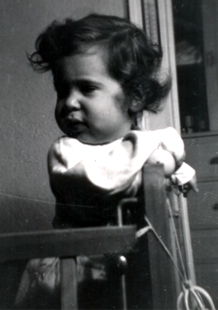 “This picture was taken on my 2nd birthday, I was confined to my crib (I think I had mumps).  Because we lived in a studio apartment my birthday party happened in front of me, but I was an observer, not a participant.  All of my life I have been way more comfortable being an observer at parties or even just in groups larger than one or two!  I often wonder if this was a behavior instilled when I was very young?”

I moved to Lowell last year to take a risk on myself.  I’ve lived my entire previous life worrying about other people’s wants without considering my own needs.  Now in my 50’s I am finally starting to have some courage to speak up about what I might envision for my life.  I’m not sure yet exactly where I’m going or how I’ll get there.  So far it has been a really good move in the right direction.

Or another approach . . . if you only had the length of an elevator ride to tell someone about yourself, what would you say? (This is called an elevator pitch!)

If you prefer you may remain anonymous when telling your story, or sign using only your first name.  We can not be responsible for original artwork that you might want returned but would be grateful if you would be willing to give us a copy to exhibit.  We will be holding workshops during the first two weeks of February for anyone who wants to tell their story, locations, dates and times will be announced on our Facebook page  by the third week in January.  If you would like us to come to you to offer a workshop, we would be delighted to do so, all you need do is ask!

Stories may be dropped off at Studio A208 during February Open Studios at Western Avenue Studios, or can be mailed to