On Monday and Tuesday of this week I attended the 20th annual Massachusetts Digital Government Summit which was held at the Park Plaza Hotel in Boston.  There was much discussion of the latest trends in the use of technology by city and state governments.  Below are my notes from some of the more interesting speakers.

Opening Remarks by Glen Shor (Secretary of Administration and Finance)

Our goal is to use technology to make it easier for citizens to interact with government.  Also, to make more data-driven decisions.  Deval Patrick has committed to technology even in bad financial times.  We’ve been more inclined to use off the shelf software rather than building applications in-house.  Developing it in-house, you have a 100% chance of getting what you want but only a 50% chance of success.  With off-the-shelf, you get 85% of what you want with a 90% chance of success.

Trends in Mass IT by Bill Oates, Massachusetts CIO

Three areas of emphasis have been data management, expanding broadband, and collaboration with cities and the educational system.  He showed a video about the Massachusetts Innovation Challenge in which $50,000 in prizes were awarded in a competition among 25 startup companies.  The goal was to take the creativity inherent in the IT business and apply it to state government. 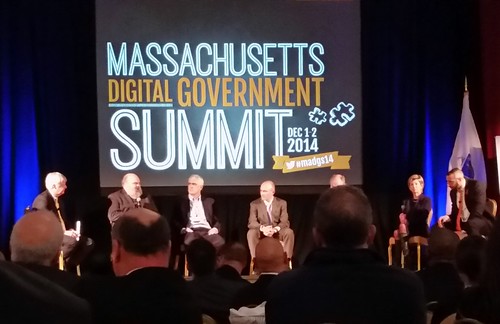 This was a loosely structured question and answer session in which the panelists gave wide-ranging answers to issues raised. Below are some of the more memorable points that were made:

Y2K gave state government something that had to be done on time; the deadline couldn’t slip.  This was a very different dynamic.

The procurement process is difficult but if all of these procedures were not in place, the system could very easily be corrupted.

Be careful about relying too heavily on consultants.  Remember the essence of consulting: if you can’t solve a problem, there’s good money in prolonging it.

In cities, especially, there’s often a losing struggle between funding things that are visible like parks and paying for back-end things like computers that are largely invisible.

The future? Because IT is the backbone rather than the backroom, CIOs will become more like COOs.  IT is part of everything an organization does.  One of the tasks of a CIO is to make very compartmented offices work together to improve the customer experience.

At Harvard (where Anne Margulies is now the CIO), they refer to the future as SMAC: social, mobile, analytics and cloud.

“Culture eats strategy for breakfast” because the pace of change in technology is unbelievable and the future is very nebulous.

You have to spend half your time dabbling in stuff.

CIOs have to lead major change in organizations because technology is disrupting the current way of doing things.  You have to be good at explaining how new things work otherwise the new things will never succeed.

Patience and persistence are key traits.  Obstacles are inevitable.  Don’t be distracted by minutia.

IT and Operations are morphing together into the same thing.

The role of the CIO is changing greatly.  It’s not just technology anymore but also includes operations.  Technology doesn’t solve anything by itself but nothing in government gets done without technology.  However, government isn’t meeting customer expectations.  They want government service to be as fast and efficient as buying something from Amazon.  Government doesn’t have the resources to compete with business so we have to be more agile and innovative to succeed in the world of limited budgets.

The best way to avoid a big failure is to have a lot of little failures early in the process.  A good way to do this is to develop in-house expertise on today’s technologies.

Relentlessly focus on end-users.  Design systems for them, not for the employees who will be using the systems.

Boston is using technology to better engage its residents.  We want to make citizens more central to how we govern.  A big issue is trust of government.

The way we operate is to try a lot of smaller projects, see if they work, and if they do, we scale them up.  If they don’t work, we shut them down quickly.  It’s important to fail fast.  Two examples of this are related to the Boston Public Schools.  One app is called “Discover” which took the existing school department website that shows each of the 100+ schools in the city and redid it to closely resemble a “ hotels.com” type of site.  The other app is “where is my school bus” which tells a parent where the bus is in real time.

The other thing we do is blend online with offline.  You can’t separate online from in person engagement.  They created a “City Hall To Go” which is like a food truck for government services.  It drives to where the people are and offers a variety of services rather than forcing them to come to City Hall.  The other app is called “Community Planit” which is a planning app designed like a game.  Information about real projects and problems are made available online.  Before attending an in-person meeting, people can educate themselves on the facts and the issues so when they do finally come together they are much more productive because a lot of the preliminaries are already done.  This promotes more civic involvement.

The third thing to remember is that real engagement is hard.  Experiment to find what works.  Experimentation is the key to civic engagement.