With the state election on the fourth day of the month, November began with a high level of political intensity that saw the election of Charlie Baker as Governor and Rady Mom as State Representative in the two races that were most closely contested around here.  With all that political passion expended so early in the month, it’s been tough to tune back in to politics.

I did watch this week’s council meeting on LTC replay.  There’s not much to report: a pre-emptive presentation on snow and ice removal from DPW Commissioner Ralph Snow was interesting and I paid attention when Councilor Rourke gave his report of the Public Safety Subcommittee meeting.  Police Superintendent Bill Tayor, Middlesex DA Marian Ryan and Sheriff Peter Koutoujian all attended the meeting and pledged to continue to work cooperatively to assist Lowell in improving public safety.  The Sheriff pointed out that the majority of inmates at the House of Correction are there for crimes related to or caused by substance abuse.

Although I don’t recall it being mentioned at the council meeting, drugs seem to have been involved in the stabbing death of a young woman in Lowell on Monday night which would corroborate my assertion that the bulk of the crime in Lowell, both crimes of violence and against property, can be traced to the abuse of drugs.  Everyone seems to acknowledge that, as Sheriff Koutoujian certainly did, but we rarely hear the kind of intense public discussions on the community’s role in the treatment of addiction that we hear on many other topics.

Stabbings and shootings are not the only causes of death on the streets of Lowell.  Several times in the past couple of months I’ve called for more attention to be paid to pedestrians and their safety.  Since I last wrote this column two weeks ago, two pedestrians have died and a third was seriously injured after being struck by motor vehicles.  The fatalities occurred on Gorham Street on Monday November 10 and on Pawtucket Boulevard on Tuesday November 11.  The other incident occurred this Friday night in front of the Wendy’s on Chelmsford Street.

I don’t know the particulars of any of these occurrences.  Perhaps they involved pedestrians in dark clothing trying to cross busy streets in the late-fall darkness or maybe it was inattention by drivers or could it be that needed street lights weren’t in place or in operation.  Whatever the cause, the results are unacceptable.  We can’t have walkers being run down in our city’s streets.

I previously wrote about pedestrian safety when Governor Patrick came to Lowell a month ago to deliver $15 million for the redesign of the Lord Overpass and vicinity.  The schematic on display at that event suggested that the only major design change will the extension of Jackson Street to meet Fletcher at its intersection with Dutton/Thorndike Street along with the ramp coming down from the overpass to Dutton Street be widened to two lanes so that one will be able to turn into Jackson Street and the new Judicial Center.  Nothing in this new design made it easier or safer for someone trying to cross Dutton Street on foot to do so, nor did it make easier to walk from the Gallagher Train Terminal to downtown.

What was on display when the governor came was not the final plan.  I understand that the city Planning Department will have substantial input into the final design.  Hopefully there will be opportunity for public input into that design.

Beyond that geographic area, however, the city should make a greater effort to promote safe walking.  This might include a code of conduct for walkers and drivers, increased emphasis on keeping sidewalks clear of parked cars and snow, and many other things.  Since January we’ve seen large turnouts of first bicyclists and then marathon runners at city council meetings.  Maybe there should be a large turnout of walkers some night.

One area that would greatly benefit from making the Dutton/Thorndike corridor more pedestrian friendly would be the South Common.  But making the Common a great place to exercise, picnic or just hang out is equally important.  That’s why the city should push forward aggressively with the South Common Improvement Plan.  The Gorham Street Apartments being built on the site of the demolished St. Peter’s Church are now shooting up and in a couple of years when the Judicial Center is built on Jackson Street, the historic Superior Courthouse will have a new occupant.  The neighborhood is changing.  It’s a perfect time to start implementing the South Common Improvement Plan (shown below) 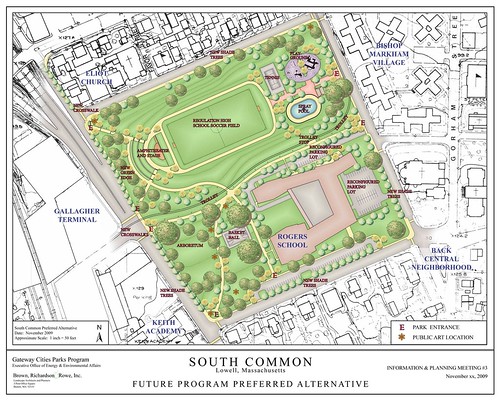 Monday’s announcement by School Superintendent Jean Franco that she would retire at the end of this school year and not seek an extension of her contract seemed like history repeating itself.  The relationship between the Superintendent and the School Committee which seemed perfectly fine early in her tenure seemed to sour last summer.  Franco’s predecessor, Chris Scott, experienced something similar.  Here’s what I wrote about Scott’s departure in my Top Ten Events of 2011 column:

After a contentious and controversial period of negotiations with the School Committee, Lowell Public Schools Superintendent Chris Scott decided not to seek a renewal of her contract. She was succeeded by Jean Franco.

Scott’s predecessor, Karla Brooks Baehr also left after relations with at least some members of the school committee turned icy.  Baehr, who had been hired in 2000 to succeed George Tsapatsaris, opted not to renew her contract in November 2007, right after that year’s city election.

Making the Jump from School Committee to City Council

Conway joins a long roster of School Committee members who have tried to make the jump to the City Council.  Gerry Durkin, Kathy Kelley, Gus Coutu and Victor Forsley were all successful in their first attempts.  Joe Mendonca and John Leahy both ran for the council and lost at first but eventually joined the council when vacancies occurred and then won election in their own right.  Leahy tried to make the jump in 2011 but finished 11th but when Kevin Broderick resigned during that council term, Leahy filled his vacancy since 10th place finisher Armand Mercier had passed away.  Leahy was then elected to a full term in 2013.  Mendonca tried to make the jump from School Committee to council in 2005 but finished 10th.  He did join the council briefly during that term to fill the vacancy created when George Ramirez resigned.  Mendonca ran again in  2007 but finished 11th that year.  He ran again in 2009 and finished 7th, winning a seat on his second try.  Those School Committee members who never did make it onto the City Council include Dave Allen, Bob Hoey, Kathryn Stoklosa and George Kouhloheras.

For those interested in who has served on the Lowell School Committee through the years, I did a post back in 2012 listing all of those who held seats on the committee since 1981.

As a historical footnote, there was a Dave Conway who ran for the city council back in 1987 who finished 17th in the primary and 18th in the general election, but I’ve not yet confirmed that it’s the same Dave Conway.

The 2nd Annual Lowell Social Media Conference will be held on Saturday, December 6, 2014 from 10 am until 1 pm at Lowell Telecommunications Corp at 246 Market Street.  It’s free and requires no advanced registration.  There will be a lot of talk about what’s going on in the Lowell blogosphere wedged in between a couple of interesting presentations on social media usage.  Best of all, if you attend, you’ll get a chance to put faces with all the names you see on blogs, Facebook and Twitter.  I’ll have a separate post about the conference later today so please check back for more info and please plan to attend.