Adhering to the rule that all politics is local, let’s begin with the 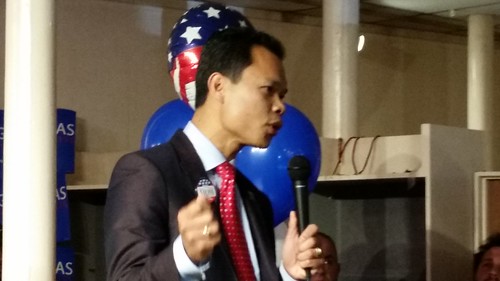 By now everyone knows that Rady Mom won this election and that he won it by a large margin.  He received 3847 votes to Fred Bahou’s 2386.  Of the twelve precincts in the district, Mom won eleven.  The one precinct he lost was Ward 8, Precinct 3 (upper Highlands) and he lost that by only 86 votes.  His margin of victory in the precincts he won ranged from a low of 28 in Ward 3, Precinct 1 to a high of 284 in Ward 7, Precinct 2.  (See precinct by precinct results here).

What were some of the factors that influenced the outcome of this election?  To answer that, let’s go back to the September 9 primary election when Rady received 647 votes to Jim Leary’s 595, Brian Donovan’s 576, Dave Ouellette’s 347, and 276 write-in votes, most presumably for Paul Ratha Yem.  The popular narrative that emerged from the primary was the Jim Leary and Brian Donovan had split Ward 8 which had historically been the dominant force in this legislative district and that split allowed Rady to slip in with just enough votes from the rest of the district.

This view received corroboration in the days following the primary when nearly every yard in Ward 8 that had a Donovan or Leary sign suddenly sprouted Bahou signs in their place.  Along the way, Fred was embraced by some popular figures and families from the Highlands and fielded a team of supporters that was both visible and vocal.  The emerging pre-election view, for me at least, was that this was a turnout contest between a big block of older, whiter, more conservative residents of the upper Highlands and the younger, more diverse, less affluent and more-likely-to-vote-Democratic (if they voted at all) voters from the Acre and lower Highlands.

When the votes were counted, Ward 8, Precinct 3 (which has been my precinct since I was old enough to vote) was decisive to the outcome of this race but not in the way that I expected.  Fred Bahou won this large precinct but he only won it by 86 votes.  Fred received 629 votes to Rady’s 543.  How did that happen?  Rady knocked on doors relentlessly in this neighborhood and it paid off.  On doorsteps and front porches, he won the support of hundreds of upper Highlands residents and cut into Bahou’s base in a big way.

On the other hand, if we consider the lower Highlands and the Acre as Rady’s base, then Fred barely made a dent in it.  Consider Ward 2, Precinct 2 which is River Place Towers, Northern Canal Village, and the vicinity of the Tsongas Center: Rady defeated Fred by 280 votes there (to put this in a historical context, City Council ticket-topper Rita Mercier received 105 votes in 2-2 in the 2013 election).  Or Ward 7, Precinct 2 which is the neighborhood around the Stoklosa School.  Rady won that precinct by 284 votes.

For anyone following trends in Lowell voting, this uptick in participation in these wards should not have come as a big surprise since something similar was evident in Vesna Noun’s performance in last year’s city council race.  All most people remember from that race was that Vesna lost his re-election campaign, dropping from 7th place in 2011 to 15th place in 2013.  What most observers missed was that Vesna’s totals in most of the wards that make up the 18th Middlesex District increased substantially from 2011 to 2013.  For example, Vesna’s vote in Ward 2 went up 23% from 2011 to 2013; in Ward 3 in went up 13%; in Ward 7 it went up 44%.  However, it did go down by 30% in Ward 8 which is a big part of the 18th District.  That plus drops of 40% in Ward 1, 31% in Ward 6, and 28% in Ward 9 were the reasons Vesna lost his council race last year.

I’m not sure that endorsements make much of a difference in a local election such as this but in this case I think they did.  Endorsements of Rady Mom by Elizabeth Warren, Deval Patrick, Niki Tsongas, Tom Golden, the Lowell Sun, and others combined to buttress the credibility that Rady was earning for himself in his one-on-one contact with voters.

One last point on this race: a person wise in the ways of state politics kept insisting to me that Rady would win this race easily because there was not a single member of the state legislature who was unenrolled (i.e., not a Democrat or a Republican) and the voters of the 18th Middlesex District weren’t about to change that.  While the voters of the 18th Middlesex District made history in this election, they didn’t do it by electing an unenrolled candidate; they did it by electing the first Cambodian-American legislator in the history of Massachusetts.

I’m not trying to cause trouble but I’ve been without a state representative since April when Kevin Murphy became City Manager of Lowell.  In a special election to fill a vacancy, the winning candidate is sworn in as soon as the vote is certified.  I know this wasn’t a special election but shouldn’t the same timetable apply when the seat on the ballot in the regular election is already vacant?  I have asked a few people about this since the election but no one can give me a good answer. 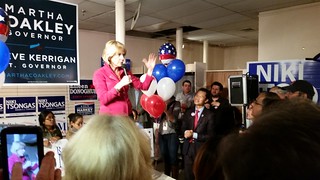 By the latest count, Charlie Baker received 1,041,640 votes statewide to Martha Coakley’s 1,001,279.  In Lowell, however, Coakley prevailed with 10,364 votes to Baker’s 8,915 votes (precinct by precinct breakdown here).  Having known, liked, and respected Martha Coakley since our days opposing each other in the Lowell District Court in the late 1980s when she was an Assistant District Attorney and I was a defense counsel, I campaigned for her in this election and am disappointed that she did not win.  Having her win Lowell was a bit of a consolation.

After the polls closed on election night I headed over to City Hall to get the official results.  As soon as they were available (which was at 9pm) I tweeted them out and posted them on Facebook.  Someone in the Boston media retweeted my numbers and there was immediate push-back that Coakley should have won Lowell by a much larger margin, a sentiment that has been repeated by a number of others.

I responded against one comment that labeled Lowell “an urban Democratic stronghold” replying that while Lowell tended to vote for Democrats it didn’t do so by big margins.  I promised to research some past statewide elections to see who was right.  Here’s what I found:

1994 Governor: Mark Roosevelt loses to Bill Weld by 42 points statewide and by 42 in Lowell;

1998 Governor: Scott Harshbarger loses to Paul Cellucci by 4 statewide and by 4 in Lowell;

2002 Governor: Shannon O’Brien loses to Mitt Romney by 6 statewide but is even in Lowell;

2006 Governor: Deval Patrick beats Kerry Healey by 22 statewide and by 24 in Lowell;

2010 US Senate special: Martha Coakley loses to Scott Brown by 4 statewide and by 4 in Lowell;

2010 Governor: Deval Patrick beats Charlie Baker by 8 statewide and by 10 in Lowell;

2012 US Senate: Elizabeth Warren beats Scott Brown by 8 statewide and by 18 in Lowell;

2013 US Senate special: Ed Markey beats Gabriel Gomez by 8 statewide and by 16 in Lowell;

2014 Governor: Martha Coakley loses to Charlie Baker by 2 statewide but wins Lowell by 8.

A Globe article on Thursday about Baker’s ability to cut deeply into traditionally Democratic urban areas highlighted Lowell and Attleboro was running against this pro-Baker trend.  Here’s the relevant part of the article:

“. . . [Baker’s] substantial financial edge and string of newspaper endorsements did not produce the gains supporters hoped for in cities such as Lowell and Attleboro. He did no better in those two places than he did in 2010.” 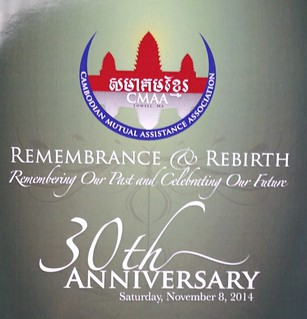 Congratulations to the Cambodian Mutual Assistance Association which celebrated its 30th anniversary with a big banquet and gala at Sampao Meas Hall on Chelmsford Street in Lowell.  After a moment of silence for the victims of this summer’s Branch Street fire and all who died in the Cambodian genocide and welcoming remarks from CMAA President Bopha Malone, CMAA presented awards to Kevin Coughlin, Sara Khun-Leng and Brian Chen for their service to the organization.

Social Media Summit – Save the Date

The 2nd Annual Lowell Social Media Summit will be held on Saturday, December 6, 2014 from 10 am until 1 pm at Lowell Telecommunications Corporation at 246 Market Street in Lowell.  Last year’s summit was a great success and we’re still formulating the agenda for this year’s event which will be free and open to anyone who would like to attend.  Please check back here in the coming weeks for more details.  In the meantime, put it on your calendar now to avoid any scheduling conflicts.

With last Tuesday being election day, I didn’t get to see the Lowell City Council meeting.  I’ll catch it on-demand from LTC’s website and post my notes as soon as I can although with no council meeting this week there’s no great rush.  I’ve also put some other, non-election issues off to next Sunday.  In the meantime, Happy Birthday to the United States Marine Corps (November 10).  To all my fellow veterans, enjoy your day on November 11.

One Response to Lowell Week in Review: November 9, 2014