The very close race for governor of Massachusetts between Democrat Martha Coakley and Republican Charlie Baker landed in Lowell earlier in the week when Republican candidate for Lieutenant Governor Karyn Polito visited the city.  She was escorted through the Hamilton Canal District by City Councilor Corey Belanger who has openly endorsed the Baker ticket, even appearing in a Democrats for Baker television commercial.  As chairman of the council’s economic development subcommittee, Belanger has been a constant critic of Trinity Financial for what he sees as the unreasonably slow pace of development of this project.  While escorting Polito, however, Belanger seemingly absolved Trinity of blame for the delays which he pinned squarely on Deval Patrick.  According to the Lowell Sun, Belanger said among other things that Deval Patrick has done nothing for Lowell during his eight years in office.

The gross inaccuracy of that statement was quickly seized upon by the Democratic State Committee which the same afternoon issued a press release listing all of the state money that has flowed into Lowell during Governor Patrick’s tenure.  I posted the full release that afternoon, but here’s the list it contained:

1.     $40 million invested in the UMass Lowell South Campus Health and Social Sciences Building, the first new ground-up academic building at that campus in over 30 years.

3.     $1.5 million invested for Rivers Edge Development Project, which is expected to create minimum of 28 units of mixed-income housing

4.     $1 million invested for Jackson Sq. Improvement Project, which facilitated the opening of a 155,000 sq. foot Lowes

7.     $900,000 from DHCD in capital bond program funding to the Paige One project, involving the acquisition and rehab of 10 units of housing for the Youth Aging Out of the Foster Care program to assist in the successful transition to independent living.

8.     In January 2008, Governor Patrick filed a five year capital spending plan that requested $2.5 billion in borrowing for public safety, state buildings and information technology to round out his five-year capital plan. The proposal included $500 million in funding for the renovation and construction of court facilities throughout the state, including $125 million for a new judicial center in Lowell’s Hamilton Canal District. From 2008-2012 DCAM completed the study, site acquisition and preparation. (Capital Bond $781K)$1.2 million was awarded in October 2012 as part of the 2013 capital spending plan for the design. Cost estimate is currently $165M and the245,000-square-foot facility will house five court departments, including superior, district, housing, juvenile, and probate and family courts. These departments currently operate in inadequate facilities that are characterized by poor condition, overcrowding, lack of security, and inefficiency. Five court departments will be consolidated into a single, efficient comprehensive justice facility, replacing two state-owned buildings and one private lease. There will be sixteen courtrooms with state-of-the-art security and technology features.

9.     In December of 2013, the Governor included $1.2 million in the FY14 capital spending plan for continued design work. The funds will be used to hire an architect, project manager and keep the project funded through the summer of 2014.The project is expected to break ground in the spring of 2015 and be completed in 2017.

10.  In January of 2014, the Governor announced $15 million in state funding to re-design the Lord Overpass, one of the city’s busiest and most traffic clogged interchanges. The re-design will help better link the downtown, Gallagher Terminal and the proposed Judicial Center within the Hamilton Canal District. As of January, 2014, design is 1/3 completed and constructing is expected to begin as early as the summer of 2014.

11.  In July 2015, Governor Patrick included in the FY 2015 Capital Investment Plan $5.5 Million for the continued design of the new Lowell Trial Court.

Besides being flat-out wrong, Belanger’s comments were also a direct attack on the legacy of former State Senator Steve Panagiotakos who served as the chair of the Senate Ways and Means Committee during most of Governor Patrick’s tenure.  It was also an attack on State Senator Eileen Donoghue and Representatives Tom Golden and Dave Nangle who have gone to great effort to help secure the projects listed above.  After all, it’s the legislature, not the governor, that appropriates money.  (Gerry Nutter was critical of Councilor Belanger and made similar observations in a blog post of his own).

Belanger’s appearance in the Baker TV ad brought to mind the last time a “Democratic” Lowell City Councilor appeared in an ad for a Republican candidate.  That was back in 1996 when then-Governor Bill Weld challenged incumbent John Kerry for a US Senate seat.  Weld ran a Democrats for Weld TV spot that featured Lowell City Councilor Tarsy Poulios saying “What has John Kerry ever done for Lowell?”  In that case, the Kerry campaign didn’t bother with a press release.  Instead, they quickly combed the archives for every “colorful” statement Tarsy had ever made on the floor of the city council, including some that were demeaning to women, and used them for a Kerry campaign commercial.  Entitled “Tarsy”, the 30 second spot began “Have you seen the Democrats for Bill Weld ad that’s been airing recently?  One of them is this man, Tarsy Poulios a Lowell city councilor.  Did you know that Tarsy said this?  Or that he said that?  Or that he did this?  If that’s the kind of Democrat Bill Weld wants, he can have him.”  Weld pulled his ad the next day.  I wonder if we’ll soon see a comparable Martha Coakley ad entitled “Corey”

The Lowell Plan held another of their uplifting breakfast presentations on Thursday at the Inn and Conference Center.  I fully concur with the sentiments expressed by my co-blogger, Paul Marion, in his recent post called “Glass Half-Full and Filling Up.”  In his piece, Paul observes that anyone harboring pessimistic thoughts about the city’s future just needs to attend (or see the video once it’s available) of a Lowell Plan Breakfast to have that pessimism transformed into optimism.

My own post about the Breakfast contained extensive notes from the Keynote Speech by Jeff Speck, the urban planner who created the Lowell Downtown Evolution Plan back in 2010.  Speck praised the city for implementing two way traffic downtown while urging us to take a more rational, market-based approach to parking, to make our intersections more pedestrian friendly by removing “push for walk sign” buttons (while leaving the walk signs).  For the naysayers on bike lanes, he said simply that if you build a bridge halfway across the river, no one will use it either, making the point until the city’s network of bike lanes actually gets you someplace, they won’t be used very much.

Of all the things Speck said, I thought the following comments, made near the end of his presentation, were most important.  He said historic preservation has been great for Lowell but things like sidewalk sandwich board advertisements are not buildings and they should not be regulated as part of the historic district.  That said, he emphatically stated that Lowell’s collection of old buildings is what gives the city its “competitive advantage” and so we should strive to preserve them at all cost. 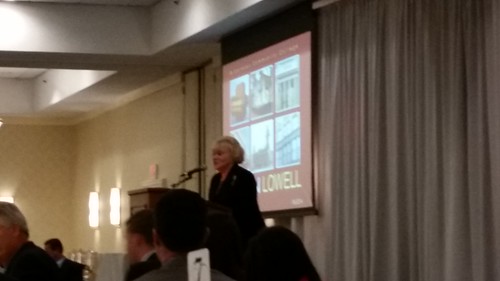 The Lowell Plan Breakfast also featured valedictory remarks by Carole Cowan who will soon be retiring from her post as President of Middlesex Community College.  Cowan took us on a chronological trip down memory lane, highlighting all of the buildings in downtown Lowell that have been renovated and revived by the college.  The list is a long one:  MCC purchased the Wang Training Center (built by Wang for $22 mil) for $11.5 million to serve as the center of the college’s city campus.  Next was the acquisition of 88 Middle Street which is the college’s Health, Science & Technology Building.  The Nesmith House on 229 Andover Street was the next property, acquired by the MCC Foundation at the urging of Paul Tsongas.  The former post office on East Merrimack Street came next.  It’s now known as the F. Bradford Morse Federal Building and houses classrooms and the college’s library.  Back to Middle Street for the Pollard Exchange Building which houses Lowell Middlesex Academy Charter School, an alternative high school operated by MCC.  The final acquisition to date was the Rialto Building at 240 Central Street, also known as the Boston and Maine Building.  It will serve as the college’s Academic Arts Building.  Dr. Cowan showed artist renderings of the final product.  With all the funding already in place, this will be a great addition to downtown Lowell.  But there’s more: Dr. Cowan said MCC has $10 mil more to be spent in downtown Lowell for further expansion.  The college is searching for the right building at this moment.  Dr. Cowan closed her remarks by saying that “a community college is the best investment that the state can make in the future of a city.”

John Power of Farley White Interests, the firm that owns the Wannalancit Mills and which earlier this year purchased the old Wang manufacturing facility on the Pawtucket Boulevard, spoke next.  Mr. Power talked of the importance of branding, citing the renaming of the Wang Towers (he was one of the purchasers at the foreclosure auction back in 1994) to Cross Point.  The name change, he said, was hugely significant.  In keeping with that theme, Power announced that his firm has renamed the Pawtucket Boulevard property “Cross River Center.” 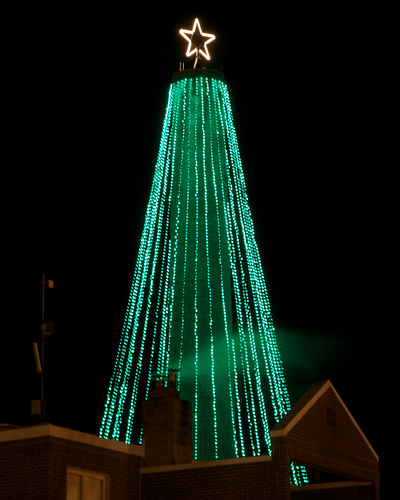 In keeping with the theme of branding, of finding ways to identify a developer/building owner with a community in a positive way, Power seized on the story of the Wannalancit Mills smokestack as an example.  When the company acquired Wannalancit the smokestack was crumbling.  It didn’t work; it wasn’t used for anything anymore.  Strictly from a dollars and cents perspective, the obvious move was to take it down.  But Farley White didn’t.  Instead, they invested $150,000 in repointing the chimney to preserve it as a historic artifact.  It was during this process someone got the idea of stringing green lights from the chimney in December, creating the largest Christmas Tree in the world (their application to the Guinness Book of World Records is pending).  Power said that the Wannalancit Tree was illuminated each year at some considerable expense until the economy stalled a couple of years ago.  The company chose not to string the lights that year.  The feedback was uniformly negative which, Mr. Power said, proved to him that the smokestack and the lights made a real difference to the people of Lowell.  He then showed an artist’s rendering of the many large smokestacks throughout the city all wrapped in colored Christmas lights which he said would be “a vision for all the children of the city.” 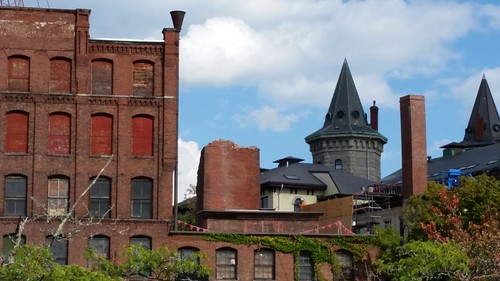 Although nothing was expressly said, I couldn’t help but think that all this talk of preserving smokestacks for the good of the community was a subtle dig at another building owner who recently demolished a large smokestack and at those who used that smokestack demolition as an excuse to attack the whole philosophy of historic preservation in Lowell.

One Response to Lowell Week in Review: October 5, 2014