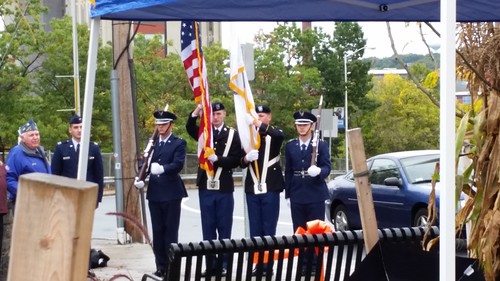 Cadets from the UMass Lowell Air Force and Army ROTC detachments joined members of the Greater Lowell Veterans Council, local elected officials, representatives of the UMass Lowell Office of Veterans Affairs and family members of a Lowell Tech student killed in action during World War Two to dedicate the new Textile Memorial Overlook.  Located on Pawtucket Street opposite Moody, the Memorial Overlook formerly was the southern approach to the now demolished University Avenue Bridge which was also (and more appropriately) known as the Textile Memorial Bridge in honor of 20 students from the college who died while serving in the military during World War Two.

The Memorial Overlook serves as a small park with lots of granite, brick and an iron railing that offers spectacular views of the Merrimack River far below.  Benches provide a place to sit contemplatively and four small trees will be providing shade by next summer.  The memorial stone (pictured below) carries the following inscription:

In gratitude to the men and women
who served in our military and
made the ultimate sacrifice and
who attended or graduated from: 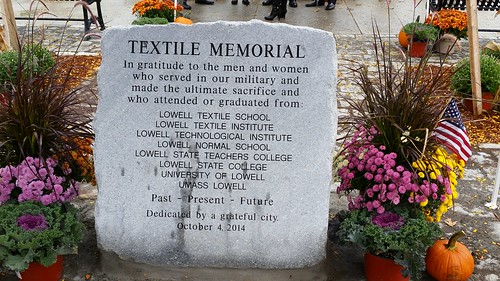 Although they are not mentioned by name, the twenty Lowell Tech service members who died in World War Two should be foremost in the thoughts of those visiting this memorial.  They:

But the memorial is not limited to the memory of these twenty who made the supreme sacrifice.  It also recalls other graduates like Army Captain Christopher Sullivan, UMass Lowell class of 1998, who was killed in action in Iraq in 2005 and World War Two Lt (JG) James Sweeney, Lowell Textile Institute, a World War Two Navy aviator who was awarded the Silver Star, the Navy Cross and the Air Medal.  He survived the war but is now deceased.  The monument also expressly states it is dedicated to those future UMass Lowell graduates who go on to serve in the military forces of our country.  An Air Force ROTC cadet reminded us of this in her heartfelt remarks about the vast responsibility she knows will descend on her next May when she’s commissioned as a second lieutenant.  At the same time the cadet shared her enthusiasm and excitement for the tasks that lie ahead of her.  This gaze into the future was an uplifting way of concluding a ceremony that looked at the sad loss of young men in past wars. 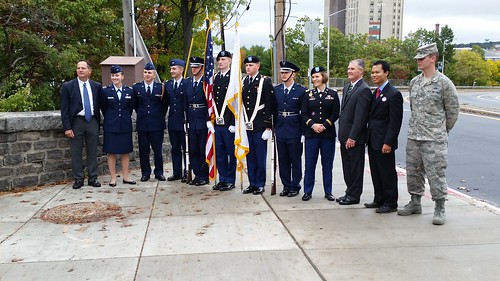