This past Tuesday night the American Textile History Museum and Lowell Telecommunications Corporation hosted a preview of “Lowell: Place of Invention”, a series of four short videos about invention in Lowell that will premiere at the Smithsonian’s National Museum of American History in 2015.  Sponsored by the Smithsonian’s Lemelson Center for the Study of Invention & Innovation, “Places of Invention” is a major component of the extensive renovations now underway to a full wing of the Museum of American History and which will open in July 2015.

Back in 2010, the Lemelson Center solicited proposals from Smithsonian Affiliates (of which the Museum of American Textile History is one) to be included in this exhibit.  The six museums involved in the Places of Invention Pilot Project (and their partners in production) are: 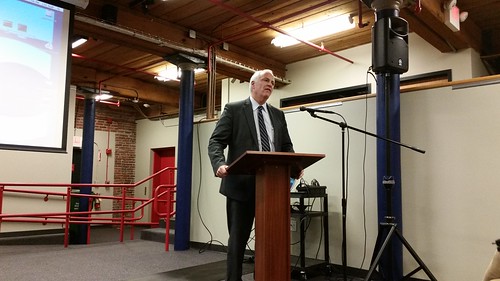 On Tuesday, Jonathan Stevens, the President and CEO of ATHM explained to the audience of nearly 40 community members gathered at LTC the background of this project and described the four short videos produced by ATHM and LTC that will be part of an interactive US map at the Smithsonian  Stevens also looked to the future, saying “tonight is the start of how we continue to tell the story of Lowell as a place of invention” and urged everyone in attendance to think of other stories about Lowell that might be told in a similar fashion, if not at the Smithsonian, then locally and online.

Jessica Wilson spoke next, remembering how very early in her tenure as Executive Director of LTC, Jonathan came to her with this opportunity for collaboration which she seized on LTC’s behalf.  Jessica said this project was a way for LTC to “lead by example” in its quest to get the community to become more involved in the creation of media.  (It’s unfortunate that Jessica recently left LTC because of the fantastic job she was doing there but we’re all fortunate that her new job at UTEC will keep her vitally involved in Lowell).

David Unger, the Director of Interpretation of ATHM then placed the videos in a bigger context by explaining “we asked ‘what makes a place inventive?’ and what can Lowell tell the rest of the nation about inventiveness?”  From that came four videos.  The first explains how the city came to be in the first place, because at the time, no one knew what a large industrial community would look like.  The second video was about reinvention and the ways in which Lowell continuously has reinvented itself throughout its history.  The third video looked at the creative economy and how Lowell’s city motto, “Art is the Handmaid of Human Good” fits perfectly with the kind of artistic inventiveness practiced at places like Western Avenue Studios which was the focus of this film.  The final video was about the influence of Cambodian culture on Lowell and featured the Angkor Dance Troupe and the Lowell Community Health Center.  This last film was produced by LTC staffer Geoff Klane and UML student/LTC intern Aaron King. 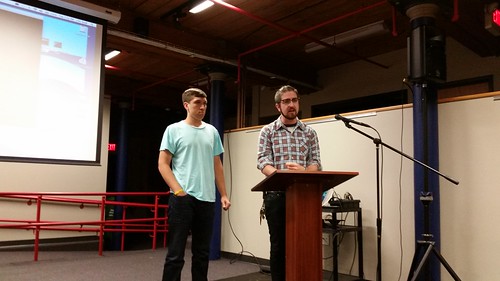 Aaron King of UMass Lowell and Geoff Klane of LTC

All four of these short films were excellent and will portray Lowell in a positive light in one of the most important history museums in the world (although I don’t believe they will be available for online or cable viewing until after they premiere at the Smithsonian next summer).  As impressive as the inclusion of Lowell’s story in the Smithsonian may be, what I find even more valuable is the part these films should plays as catalysts for additional telling of the almost infinite number of interesting and entertaining stories that originate in Lowell.  Too much of the image of the city is shaped by negative news.  The kind of community sourced, bottom up portrayal of the city and its stories is just the antidote needed to offset that negativity.