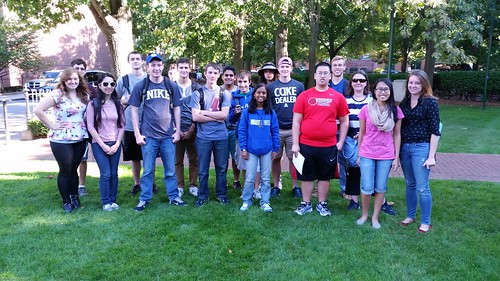 Several years ago UMass Lowell began requiring its freshmen honors students to take a seminar their first semester that’s designed to introduce them to the city of Lowell.  It’s one of the many ways in which the University is striving to make closer connections with the city.  Last year, one of the course instructors, Shanna Thompson, asked me to give a walking tour of downtown Lowell to her students.  It worked out pretty well so she asked again this year.  Today was the tour so I spent 90 minutes showing the class of 17 around downtown, telling stories about Lowell’s people and history.  One of the books being used by the class is Monuments and Memory: History and Representation in Lowell, Massachusetts, by Martha Norkunas, so we made a special effort to visit many of the monuments and public works of art in downtown.

The students were a great audience, attentive throughout and genuinely interested in the topics we discussed.  But that all changed near the end of the tour.  We were at Mack Plaza at the corner of Market and Shattuck Street.  As I spoke with the students about The Worker statue located there, a solitary figure passed us by.  He and I exchanged waves as I continued speaking and he continued on his way.  When I was done, I asked if any of the students had seen the movie The Fighter.  Almost all had so I said, “That guy that just walked by was Dick Eklund who was played by Christian Bale in the movie.”  A chorus of “can we meet him?” began but Dick had already passed from view.  Our tour continued down Market Street to Central where it concluded.  As I turned to say goodbye to the students who were bound for the Inn & Conference Center, I again saw Dick Eklund returning from his errand.  As he approached, I said hello and explained that the group with me were UMass Lowell students who would love to meet him.  He was great, shaking hands, posing for pictures and signing autographs for anyone who asked.  The students were thrilled by this chance encounter.  For me, it was a great Lowell moment, just the kind of thing that makes it fun to be a part of this city. 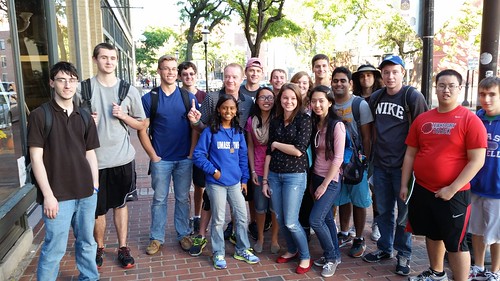 2 Responses to Lowell History comes in many forms