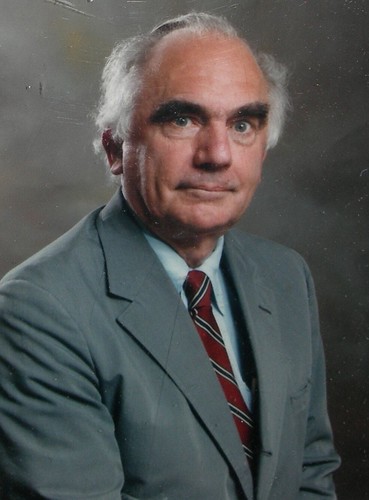 Attorney Arthur L. Eno, Jr. – Lou or Louis to most member of the Lowell Bar – was laid to rest today after a classy and dignified committal service at the chapel of St. Joseph’s Cemetery in Chelmsford, an institution he helped create. The priest who performed the service in his eulogy cited Lou’s obituary as “a mine of information” – which it certainly was – and so I urge everyone to read it on the Martin Funeral Home website. I also wanted to share my own thoughts about Lou.

When I became an attorney in 1986, Lou had already had been practicing law in Lowell for nearly 40 years. He was always extremely generous in sharing his expertise in real estate law with lawyers (like me) who would seek it, usually when they had exhausted all other resources. In other words, Lou was the person to whom you turned when you had a real estate law problem you just couldn’t solve. My reticence in turning to him except in time of crisis wasn’t because he was stingy with his time. Quite the contrary: he was unfailingly helpful. You just had a sense that everyone called him so you didn’t want to burden him with your problem until you had nowhere else to turn.

Lou’s reputation as a statewide expert on Massachusetts real estate was corroborated by a book he co-authored.  Back when I was practicing law, most lawyers had in their law libraries an invaluable collection of maroon colored books called The Massachusetts Practice Series, a set of Massachusetts-specific textbooks for lawyers divided by subject area. One of the books (actually it was in two volumes), was Real Estate Law with Forms, Third Edition by Arthur L. Eno, Jr. and William V. Hovey (West Publishing Co., St. Paul, Minn. 1995). The publisher’s promotional material described Real Estate Law as follows:

This work presents a modern comprehensive discussion of the principles of law and their practical application to all essential aspects of real estate transactions in Massachusetts. These Real Estate Law volumes set forth the necessary legal steps that must be taken in varied types of real estate transactions and gives through legal advice on all problems that might arise from both the side of the buyer or seller or lessor or lessee.

When I was elected Register of Deeds in 1994, I was delighted to be able to turn to Lou, one of the foremost authorities in the Commonwealth on Massachusetts Real Estate Law, for advice on operating the registry. Within a few days of me requesting it, Lou provided me with a multipage list of suggestions that might improve the registry. I treated it like a “to do” list and implemented many of his idea early in my tenure. Over the past two decades, countless attorneys and researchers have benefited from that list Lou shared with me back in 1995. 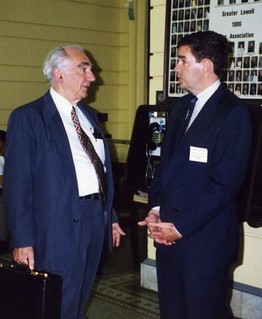 I also came to know Lou in his capacity of Lowell Historian. Although our time on the board of the Lowell Historical Society never overlapped, we collaborated on several “Lowell in the Civil War” projects in the late 1980s and always found time to talk about the city’s history any time our paths crossed (often at Barney’s at lunchtime, I seem to recall).  And Cotton Was King, the history of Lowell edited by Lou and published by the Lowell Historical Society in 1976 has always had a prominent place on my bookshelf.  More than anyone except perhaps my dad (Richard P. Howe Sr.), Lou early on inspired me to take on Lowell’s history as a vocation, something for which I will be forever grateful to him.

While we always had a cordial and warm relationship, I wouldn’t say that Lou and I were particularly close. Yet he influenced my life profoundly in two separate areas: real estate law and Lowell history. I suspect there are hundreds of others who could share similar stories. His own accomplishments benefited Lowell directly in countless ways. But when you add in the indirect benefits to the city from untold others like me who were so beneficially influenced by Lou, you have to conclude that Arthur L. Eno Jr.’s contribution to the city of Lowell was immense.