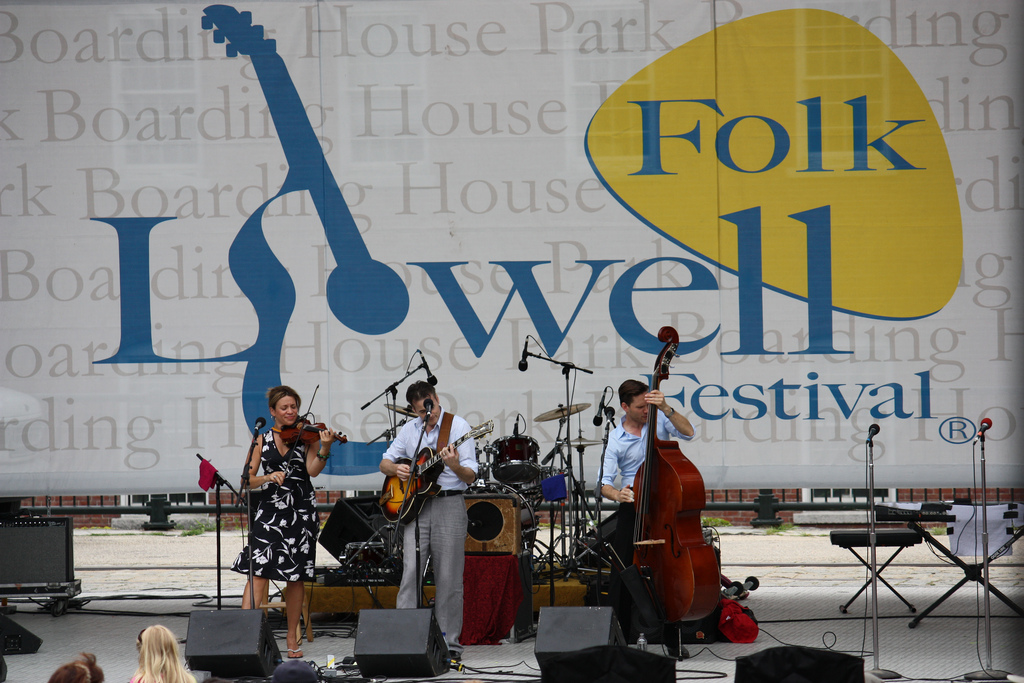 Congratulations and thanks to all involved for another successful Lowell Folk Festival.  I attended on both Saturday and Sunday with vastly different experiences but that was because of the heavy rain that fell midday on Sunday.  Hopefully the financial impact was less severe than the weather.  I am sorry I missed Friday night’s Ethnic Parade: the photos I’ve seen convince me that is a festival highlight.

Last year, in the aftermath of another fun festival, I wrote a blog post entitled “The Future of the Lowell Folk Festival.”  In it, I almost apologetically tossed out some ways that the Folk Festival might evolve.  My post got some comments but not much else came from it.  Rereading my sentiments from a year ago, I find them still to be relevant now and ask you to read (or reread) the post and share your thoughts on it.

As good as the Lowell Folk Festival is, I still feel it could be even better if it evolved into something a bit different than what it is today.  Let’s face it: not everyone likes traditional folk music.  I like it, but not enough to bring my lawn chair to Boarding House Park and spend the entire weekend sitting there watching the acts roll onto the stage.  Instead, I wander around with open eyes and an open mind, seeking to discover new and interesting things.

In thinking about a mid-summer festival in downtown Lowell, we could learn some lessons from social media.  If you want to extend your reach on social media, you can’t just be on one platform like Facebook or Twitter.  You have to be on them all: Facebook, Twitter, Instagram, Linked-In, YouTube, Flickr and all the others.  That’s because there is no one dominant channel.  They all have their own users.  And if you want to reach all of those users, you have to be on all the platforms.  Choosing just one puts you in a narrow niche that greatly limits the audience for your message.

The same logic applies to a festival and to marketing Lowell in general.  There’s no more one-size-fits-all solution, so maybe broadening the offerings during the last weekend in July – for that matter make it the last week in July – will engage more people, particularly those who already live here or in the surrounding communities.  In a way, that’s already happening.  There’s a parallel festival of local and guest musicians in downtown establishments that’s impressive in itself.  I suspect this fringe festival attracts more Lowell residents than the official festival and there’s nothing wrong with that (other than the locals being officially sanctioned second class citizens).  But why not embrace this dynamic rather than keep it quarantined.  And why limit it to music.  Lowell is awash with interesting people doing interesting things.  There are painters and poets and programmers all of whom have their own followers and fan base.  Some of the most impressive festivals in America have grown from narrow beginnings to a collage of offerings spread over a week or more.  I’m thinking of happenings like Spoleto in Charleston and South by Southwest in Austin.

In the nearly three decades of the Lowell Folk Festival there have been plenty of changes.  The evening stage was on the South Common in the early years.  The Dutton Street Dance Pavilion is a recent innovation that is a great success.  There are many others.  But the Folk Festival has stayed fundamentally the same from the very first one.  It’s still here so something is being done right.  Nevertheless, I see no harm in exploring all options.   It’s unlikely that the core Festival organizers would ever drive such changes: they have too much to do to maintain the current version and because of their closeness and ownership of it, I assume they see no need for such changes.  Nor is there another entity with the wherewithal to drive big changes now.  The city can’t do it; UMass Lowell could, just not during the summer when much of the university shuts down.  More likely things will continue as they are until some funding crisis arises.  If and when that occurs, it should be viewed not as a crisis but as an opportunity.  That’s why there’s no harm in speculating about the possibilities now.