Tony Sampas shared the following picture and narrative about an upcoming program called “Coming Out in Lowell – from the Early Community to Marriage Equality” which will be held at Lowell’s Pollard Memorial Library this Saturday, June 7, 2014 from 11:00 am to 1:00 PM. The event will feature a short speaking program and a reception with entertainment and food. The event is free and open to the public. Back in January, we did a blog post called “Moody Gardens” which was written by Beth Brassel and Mehmed Ali, the two speakers and the joint, driving force behind this important effort to preserve a part of Lowell’s history. The following information about this project and Saturday’s program is provided by Tony Sampas: 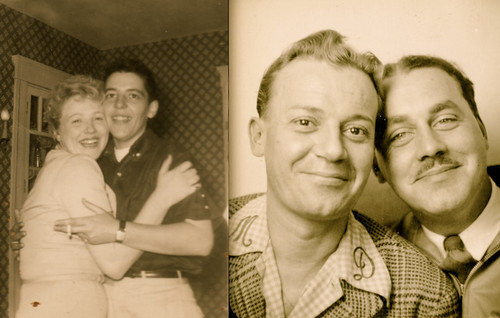 Over the past year, the Lowell Gay History Project (LGHP), with support from a Lowell Cultural Council grant, has been collecting archival material and personal stories documenting the history of the gay and lesbian community in Lowell. The project has been focusing particularly on the period after World War II through the late 1960s especially on Mill City’s well-known entertainer Manny Dias who pushed the envelope with his public shows as well as Greater Lowell’s lesbian community who found a home in the 1950s and ’60s at the famous Moody Gardens club. During these decades brave lesbians and gay men, persisting despite hostility from the larger society, laid the ground work for the gay community’s civil rights struggles in the 1970s and 1980s, all of which has led to the great gains made in more recent decades including the same sex marriage victory of ten years ago.

Beth Brassel and Mehmed Ali, the coordinators of the project, believe that the project is an important addition to the scope of the city’s history.

Ali, a faculty member with University of Massachusetts Lowell’s History Department, relates, “Gay folks had a hard time being accepted by many in the city but also found places like the Moody Gardens or the Majestic Café where they could form communities which illustrated freedom of assembly for all Lowellians.”

Brassel, a librarian at Lowell’s Pollard Memorial Library, states, “Uncovering the history of the LGBTQ community in Lowell is important not just for the members of the LGBTQ community, but also for the larger Lowell community. This is a history of strong, persistent people whose struggles against discrimination and harassment are not only a part of gay history, but also an important part of Lowell history.”

On Saturday, June 7th, much of the material collected will be displayed at an event held at the Pollard Memorial Library beginning from 11:00 am to 1:00 pm with free food and entertainment. The event will give the public an opportunity to become familiar with some of the rich, yet untold, history of Lowell’s gay and lesbian community.

3 Responses to “Coming Out in Lowell” – lecture & reception Saturday