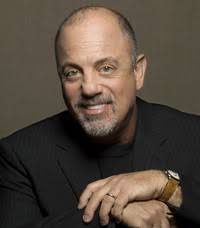 Just back from an inspiring “performance” by Billy Joel in Durgin Concert Hall on UMass Lowell’s South Campus. For two hours the music mega-star engaged in a lively conversation with the audience, using a green laser pointer to call on this or that eager person in a sea of hands. The stage talk format is Joel’s preferred situation for college visits these days. He says he found his route into the music business by trial and error, with a lot of mistakes, so this is his way of giving back to those who are thinking of music as a way to make a living or to make a life. There was no “book” to follow back in 1964 when he joined his first band in the days of Beatlemania. He says he “fell hard” for the music life and didn’t look back, playing obsessively during his teenage years, so much so that he didn’t finish high school. He doesn’t point to himself as a model of anything, he says, but he has plenty to offer from the school of learning-by-doing.

Joel was at ease, joking with the audience and making himself the butt of most of the fooling, including the unlikely pairing of an “incredibly not good-looking guy” who used to be five-foot seven and supermodels like Elle McPherson (six-foot two inches) and the Brinkley woman who actually agreed to marry him, the “Innocent Man.” He goofed on some of his classic songs like “Piano Man” and “We Didn’t Start the Fire.” But in between the banter and storytelling, Billy Joel did his best to give up some of the trade secrets of his business and tell the truth about what it took for him to become a rock star. He said luck and timing were key ingredients, on top of the dogged performing night after night that sharpened his artistic genius and allowed him to master the craft.

As he responded to questions he hopped from the standing mike to one of the two pianos, illustrating at times the point he was just making. When a guy in the balcony asked if he started with music or words, Joel said, “Ninety-nine percent of the time it was music, which was and is what I like best.” But he had an example of starting with words, the lyrics to “We Didn’t Start the Fire,” a recitation of key names and phrases that summarize his life and times up to that point in 1989  [Listen for the Pasternak-Kerouac rhyme]. He must have played all or part of about a dozen songs, including “Piano Man” and Elton John’s “Candle in the Wind.”

For me, the highlight of the night was near the end when a young guy, I presume a UMass Lowell music major, hollered out “Leningrad,” hoping that Joel would play the song, one I had never heard. Joel had earlier replied to a woman who asked about his greatest achievement, saying he was proud of his visit to the USSR in 1987 when Gorbachev was the nation’s leader. He said the Russians went crazy when they heard his songs on the supersonic sound system Joel had brought from the USA. When Joel heard “Leningrad,” he paused and, I think, said, “I haven’t played that live.” Maybe he said he hadn’t played it live for a while. Anyway, the student yelled out, “Let me play it.” Joel, who had been a good sport all night with all kinds of requests, said OK and invited the student on stage to take the smaller piano while he sat at the grand piano. Joel asked the student if he knew the intro. “Of course,” came the answer, and they were off. The audience hung on every note and word of the song about an American who grew up during the Cold War with the Soviets finally meeting face-to-face a Russian of about the same age. It was exhilirating to watch the two piano players, note perfect as far as I could tell. When the song ended the audience erupted, some standing and cheering. Joel said, “He played it better than I did,”  and called him over to the microphone and announced the student’s name—I missed it in the uproar.  Not about to miss his opportunity, the tall, thin young guy handed Joel a CD in a case, no doubt his own recordings. Nobody who was there will forget that duet.

Joel closed out the evening with a few Christmas songs, starting with a rich version of “Have Yourself a Merry Little Christmas,” and then inviting the music student-loaded audience to harmonize on a sing-along as he played and sang “Angels We Have Heard on High” and another whose title escapes me.

It was a big night at the University—a major coup to have earned the rare visit by Billy Joel. We in the audience saw and heard a huge artist of our time, telling and showing how he makes art and sharing with us what it’s been like living an artist’s life. The power of what he has created was reflected back to him in the sincere applause and warm statements made by many of those he called on tonight.