The 4th Massachusetts Sustainable Communities and the 3rd Massachusetts Sustainable Campus Conferences came together yesterday at the UMass Lowell Inn & Conference Center with hundreds of representatives of government, education, business, nonprofits and grassroots organizations coming together for a full day of listening, learning and discussing sustainability practices and resources. 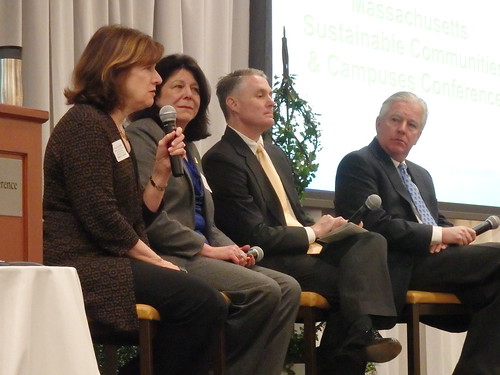 The conference began with a keynote panel moderated by Joan Fitzgerald, the interim Dean of the Northeastern University School of Public Policy & Urban Affairs with panel members Mayor Donna Holaday of Newburyport, Mayor Rodney Elliott of Lowell, and Chancellor Marty Meehan of UMass Lowell.
Mayor Holaday said that in Newburyport, citizens acting collectively have driven institutions like town government and schools to embrace sustainability. She said that one of the biggest challenges in the public sector is for elected officials to look at the long term and not just at the next election. She said that instituting sustainability practices has been made especially difficult by the recession and the resulting cuts in government resources. Despite this, it’s critically important that government not take short cuts in this area.

Mayor Elliott cited Lowell’s successful transition to single stream recycling as a big accomplishment that has reduced trash tonnage and increased recycling rates. He also pointed to a 2008 technical audit of all city owned buildings that yielded a comprehensive approach that has resulted in the delivery of services such as heating and electricity at lower costs. He said that in 2010, Lowell was officially designated a Green Community, that energy conservation is now a factor in permitting, and that the city’s master plan which was adopted last year by the city council embraces the concept of sustainability.

Chancellor Meehan welcomed everyone to the Inn and Conference Center saying that one of the primary reasons the University purchased the facility was that it was a way to house 500 students at one-third of the cost of building a traditional dormitory. Another reason for the purchase was to attract cutting edge conferences such as this one. Meehan said that universities have a unique role because academic departments lead the way on developing policies and also scientific techniques that are central to protecting the environment. But as a large institution, universities must also put into practice the policies they advocate. Meehan told a story about a welcome to the campus cookout held in his honor the summer he became chancellor. At the event, he grabbed a can of Diet Pepsi, consumed its contents, and then began searching for a recycling bin in which to deposit the empty can. Finding none, he put the empty can in his coat pocket and left it there until the next morning’s staff meeting when he pulled it out and plopped it on the table, dramatically making the point that while the University did have a recycling program, it was not being pursued aggressively enough. A big challenge for schools like UMass Lowell is the density of older buildings. He told how he cringes in the wintertime when he passes by the school’s oldest building, Coburn Hall, and sees windows open in the freezing cold weather because the elderly heating system can’t be regulated properly. Meehan went on to say that transportation is a huge issue for UMass Lowell. He would have preferred not building the two parking garages that were just constructed but they are necessary for car-bound students needing to get to class. He acknowledged that the university’s various campuses are somewhat spread out, but suggested that they are no further apart than the buildings within the huge UMass Amherst campus. Students there walk everywhere; why can’t they do the same at UMass Lowell he asked rhetorically. He said the challenge is to change the culture to get more people walking between the various campuses.

Near the end of this segment, Dean Fitzgerald commended the two communities and the university for the work they are doing but asserted that “buildings and transportation” are the biggest contributors to our environmental problem and urged everyone to tackle those issues along with recycling which, while important, does not have the impact of the other two.