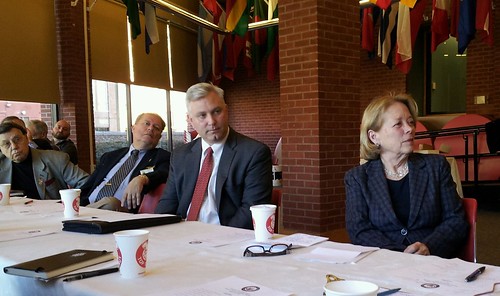 Congresswoman Niki Tsongas convened a meeting of her Veterans Advisory Council yesterday with special guest Coleman Nee who has been the Commonwealth’s Secretary of Veterans Services since 2009. More than 30 veterans, many of them veterans service officers in Lowell and other Third Congressional District communities, attended the meeting.

Congresswoman Tsongas began with an update on military and veterans-related developments in Washington. She said the Department of Defense is undergoing tremendous cuts, both from the drawdown from Iraq and Afghanistan but also due to budget reductions caused by the “sequester.” In the past, the Pentagon has had “plenty of money” although it has not always spent it wisely, but the current cuts are so extensive that they will soon diminish the readiness of our armed forces.

With the continued need to reduce spending, base closures are always a possibility but Tsongas praised Governor Patrick and his administration for making a strong case to keep Hanscom Field open as an active base. She said the same was true for the Natick Research Lab which is the only active duty Army installation in New England. Congresswoman Tsongas also gave updates on evolving sexual assault policies, treatment of head trauma, and dealing with a backlog of claims at the VA.

Secretary Nee then spoke about the services that Massachusetts provides for its veterans. He said the Commonwealth is a national leader in this and as a state it spends double the amount per capita that is spent by the second most generous state in the country. Massachusetts law requires every city and town to have a Veterans Services Officers. Nee commended those VSOs as the “front line” in servicing veterans.
The Secretary then identified some of the most pressing issues of today. One is suicide prevention. There are hotlines but he said that everyone who calls a hot line is someone who should have received help three years earlier. The state is making an active effort to reach troubled veterans before they begin thinking of suicide as an option. Ending chronic homelessness of veterans is also a top priority. So is jail diversion. The state’s first “veteran’s court” is now operating in Dedham and a group of local veterans are trying to bring a similar court to Lowell. This type of court makes diversionary programs and additional services available to veterans who run into legal trouble.

Women are the fastest growing group of veterans in Massachusetts. Nee said there are “generational differences” within the community of female veterans with many of the younger women having seen combat while serving in Iraq or Afghanistan. Veterans enrolled in our universities and community colleges are also a fast growing group so it’s critically important that veterans services be readily available on campus. Nee commended both UMass Lowell and MCC for the veterans services that they provide.

The meeting was very instructive and during the comment period, it seemed that Tsongas and Nee received some important feedback from the assembled veterans.