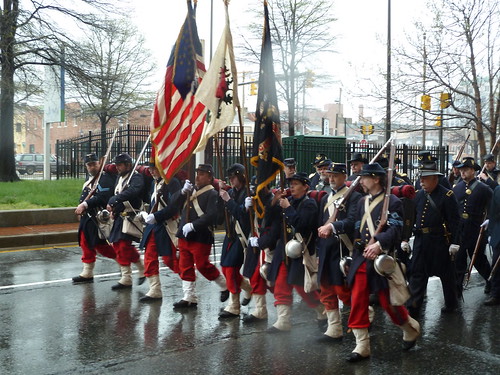 UnchARTed Gallery at 66 Merrimack Street is the place to be in Lowell tonight. Beginning at 7pm, an exhibition of Civil War reenactor photographs by Rachel Napear will have its grand opening. This will be unlike any other exhibit opening in recent history because it will begin with a parade of uniformed Civil War soldiers down the middle of Merrimack Street to the gallery. It will also feature the first public display of the Solon Perkins Flag, an actual Civil War battle flag that was recently discovered in the basement of the Lowell Memorial Auditorium. The flag was flown by the cavalry company Perkins commanded in Louisiana on the day he was killed in action. Throughout the night, the Civil War era military band, Shades of Gray, will perform. So please come down to Merrimack Street tonight. It will be well worth it.