Last Tuesday, several Lowell City Councilors outed themselves as vindictive bullies in their handling of the appointment of Salmira Mitchell to the Library Board of Trustees. Here’s the context of what happened: City Manager Lynch presented four board appointments to the city council. The first, of Dr. Julia Hans to the Green Building Commission, did not need council approval. The other three, of Salmira Mitchell to the Library Board, of Bob Malavich to the Planning Board, and of Mike Paglia to the Zoning Board of Appeals, did require affirmation by a majority of the council. Lynne on Left in Lowell has bundled the video of what I write about below in a post along with her own commentary in case you want to check the accuracy of my transcription. My own notes taken as the meeting was in progress were posted on Tuesday night.

Our story starts with the appointment of Dr. Hans to the Green Building Commission. When that arose, Councilor Rita Mercier gained the floor. Here is what she said:

Last week Councilor Danny Rourke had a motion on the agenda to request that the city manager not enter any contracts or extend any contracts of which I did not agree due to the time sensitive nature of many of the contracts, specifically union negotiations that are very close to being finalized and for that reason I felt it was necessary to not support that portion of the motion, however, I would have supported the second part of the motion for the manager to not make any appointments or reappointments to any boards or commissions but the motion was withdrawn before I could have amended it. With this very first appointment, I think it is appropriate time to hold off on any and all appointments. I know that some appointments do not require city council approval such as this first one, the green buildings appointment, but there are three others that do require city council approval. I have nothing against the people that are being selected this evening. I would like to request through a motion that this city council delay action on any and all appointments and reappointments to commissions and boards until such time as a new city manager is selected to choose his or her own selection. We at times approve of appointments for five years. I think it is a lame duck issue. I think it’s very unfair that someone should be leaving soon and appoint someone to a three to five year board and someone is going to take office here and not be able to do anything about that so that’s why I’m making this motion.

[Comments by other councilors]

The reason I made this motion for the very first one. I did specify that some appointments do not require city council approval. The point isn’t if we support it or we don’t or we have a vote or we don’t. The fact is there are four appointments for a vote this evening. I’m not going to say well this one can go but that one can’t and this one is alright. This isn’t the story with this motion. The story with this motion is that I don’t think the manager should make any appointments whether we have a vote in it or not until the new person or whoever that person is comes in and does that.

Councilor Milinazzo then insisted that Councilor Mericer’s motion (that the manager not make any appointments) was out of order. Mayor Elliott asked the City Solicitor for a ruling. The solicitor said the motion was improper under the state’s Open Meeting Law.

Councilor Mercier resumed:”I think we were put in a very precarious position right now and I don’t appreciate it at all. I’ll withdraw my motion and I’ll vote no on these appointments.”

Because Dr Hans appointment did not require council approval, the council voted to place the communication from the manager on file. That brought up the next item on the agenda which was the appointment of Salmira Mitchell to the Pollard Library Board of Trustees.

Five YES, four NO. The Mitchell appointment was tabled.

Eight YES, one NO. The Paglia appointment was approved by an 8 to 1 vote.

Taking the position that a lame duck city manager should leave board nominations to his successor is reasonable. Under the Plan E charter, the council probably does not have the authority to forbid the outgoing manager from bringing forth such nominations, but the council can certainly express its wishes and then carry them out by rejecting any nominations brought forward. Councilors would have sound policy reasons for rejecting such nominations. A new manager should have the opportunity, to the extent possible, to select his or her own team. As Bill Parcells famously said, “If you want me to cook the meal, let me buy the groceries.”

But that’s not what this council did. This council, by Councilors Mercier, Rourke, Belanger, Kennedy and Mayor Elliott, set aside the nomination of Salmira Mitchell but then all five of them voted to confirm Robert Malavich to the Planning Board and all but Belanger voted to approve Mike Paglia to the Board of Appeals. Why the inconsistent treatment?

Some may speculate that Malavich and Paglia are insiders or otherwise connected in some nefarious-seeming way. That’s certainly not the case. I’ve known both Malavich and Paglia for quite a while and they are both honorable individuals who have given their time and energy for the betterment of the city in many different ways. But so has Salmira Mitchell who I know equally well.

Sensing that insiders or people who are connected had some bearing on this vote is not altogether wrong. Lacking a quorum on the planning board or the board of appeals might inconvenience a developer-friend with a pending proposal. That possibility may have been a factor for the councilors who voted inconsistently. A trustee for the library? What is the library other than the “sex offender in the stacks” stick used to periodically whack the city manager. Lynch is leaving; the library can wait.

Salmira Mitchell is a woman and the other two nominees were men. Isn’t it sad that the only woman on the city council, Rita Mercier, led the charge against the only woman nominee and then voted for the two men. Where are all of those who so vigorously defended womankind when Gerry Nutter was nominated to the election commission months ago? You remember, they condemned Gerry for an impulsive blog comment made in a questionable context. Shouldn’t they be voicing similar outrage at the shabby treatment afforded the sole woman nominee when two male nominees in the exact same situation were embraced unanimously and near unanimously? Their silence is deafening.

The reason the Gerry Nutter appointment was so controversial wasn’t because of Gerry’s views on women. Gerry was attacked because he had written harsh things on his blog about city councilors and his appointment was their chance for payback. Salmira Mitchell has never written anything on a blog but her husband Jack has. If someone has a problem with Jack’s writings, they should take it up with Jack. They shouldn’t take it out on his spouse. Only a vindictive bully would do that. What other conclusion can be reached? If councilors truly opposed appointments by an outgoing city manager, they would have voted against all three. They didn’t do that. They pushed aside one and embraced two. There is no justification for the inconsistency.

Even though Councilors Rourke voted to table the Salmira Mitchell appointment, he should be given the benefit of the doubt for now, partly because he is so new to the council but also because immediately after the other two nominees were approved on Tuesday night, Rourke moved to take the Mitchell appointment off the table, presumably so he could then vote in favor of it in order to be consistent with his other two votes (Mayor Elliott ruled that the motion was out of order). At least Rourke tried. Councilor Belanger should also be treated separately because he’s new but also because his votes were at least partly consistent. He did vote against Paglia’s nomination although he also voted for Malavich. The only councilors who voted consistently all night were the four who voted in support of all three appointments: Councilors Milinazzo, Martin, Samaras and Leahy.

A library is one of the most important institutions in a community. One who truly believes that is my co-blogger, Paul Marion. Read his post on the importance of the Pollard Memorial Library in the context of the above episode along with the twenty plus comments that have been made to it thus far. 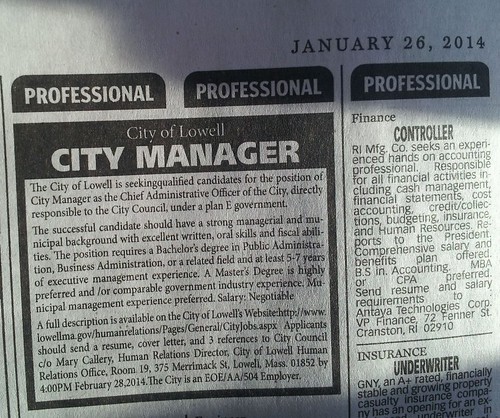 The official job posting for City Manager is on the city’s website, right after Traffic Supervisor and Plumbing Irrigation Specialist. Here’s the requirements for education and experience:

Chris on Learning Lowell has a post that provides background information about city managers in general and the Lowell job in particular.

Chris Scott on The Column blog has a trip down memory lane, pointing out the irony that Bob Healy, the recently retired long-time City Manager of Cambridge, is now being considered as an interim city manager here in Lowell when back in the 1970s, he was unable to get more than four votes for the job from the Lowell City Council.