This morning I attended the monthly meeting of the Greater Lowell Area Democrats at the Radisson Hotel in Chelmsford. Five Democratic candidates for statewide office were present and spoke to the forty or so people in attendance. Here are the notes I took during each of their remarks. 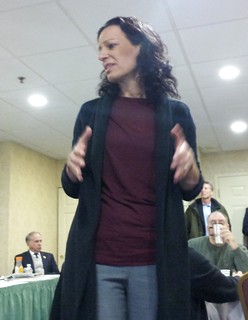 Juliette Kayyem has spent much of her life “breaking down walls” as a lawyer, an educator, a writer, and a government official. While an assistant attorney general in the Clinton administration (with Deval Patrick as her immediate supervisor), Kayyem had a lead position in the Federal lawsuits against Virginia Military Institute and the Citadel, neither of which admitted women. Now, both have student bodies that are 30% female. She said making progress in these areas isn’t easy; it requires a constant push. She next explained how Governor Patrick recruited her to be the state’s first director of Homeland Security. There she learned that the work of government is all about preparedness; whether it’s about guns, climate change or education policy. She said regional planning was the future of Massachusetts. We have to “end the tyranny of home rule” and it’s the job of the governor to drive regional solutions. She next talked about her experience leading the Homeland Security response to the BP oil spill in the Gulf of Mexico. Everyone believes government is important in time of crisis but Democrats believe that government is important all the time. Massachusetts has always been “bold, innovative and fearless” – “We don’t settle; we surge.” (Kayyem website). 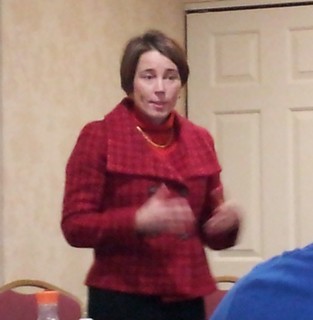 Maura Healey served as Deputy Attorney General for Martha Coakley but recently left the office to focus on this campaign. Her mother was a school nurse and her father was a history teacher and high school sports coach. Healey spent her summers waitressing at Hampton Beach and then studied government at Harvard where she also played varsity basketball. After college, she played in a women’s professional basketball league in Europe before returning to law school in the U.S. She talked about the important role the Attorney General plays in the lives of all residents of Massachusetts, whether it involves punishing the misuse of credit reports or supporting civil rights. “No matter your race, religion or zip code, you have the right to go to a good school in a safe neighborhood,” she said. In the AG’s office, she took the lead on the state’s efforts against predatory lenders and in its response to the foreclosure crisis. She was the lead counsel in the state’s challenge to the Constitutionality of the Defense of Marriage Act which was struck down by the U.S. Supreme Court last summer in the Massachusetts case. As a final example of how the Attorney General can improve the lives of people, she told a story that years ago she brought a case against Apple because its iTunes software didn’t have features that made it inaccessible to those without sight. Apple settled the case and when it rolled out the iPhone shortly thereafter, it was fully compatible with use by the sightless. [Editor’s note: As register of deeds I have worked with Maura Healey and the AG’s office on various aspects of the foreclosure crisis. Her efforts there helped make a bad situation not as bad and in the process helped the city weather the crisis. Until this morning, I had no inkling of her abilities as a basketball player so I quick trip to Google revealed this 1992 article about her in the Harvard Crimson]. (Healey website). 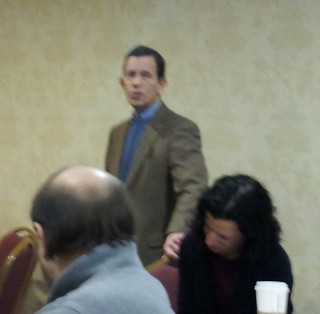 Grossman said as governor he would strive to create 50,000 new manufacturing jobs in Massachusetts. Our vocational schools and their ability to train for the advanced and precision manufacturing jobs of tomorrow are critical to attaining that goal. “Manufacturing is in the bones of Massachusetts,” he said. He also thanked everyone for electing him Treasurer in 2010 and went through some of his accomplishments in that office. He’s running for governor because “people want proven leadership that will leave no one behind.” Rampant income and economic inequality is a big issue. He’s the only candidate who has spent his life creating jobs (in his family’s business). (Grossman website). 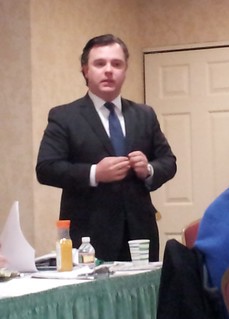 Steve Kerrigan is from Lancaster. His father was an electrician and his mother worked in education. Both belonged to unions. Steve served as CEO of the Democratic National Convention in 2012 in Charlotte, NC and had a lead role in the most recent presidential inauguration ceremonies. He’s also been deeply involved in non-profits that aided survivors of 9/11 victims and of service members killed during our recent wars. Policy-wise, he said that while job creation, education and transportation are all important, the first thing the state should do is create a “competitiveness council” that strives to make Massachusetts more competitive in all aspects of society, not just education and business. (Kerrigan website) 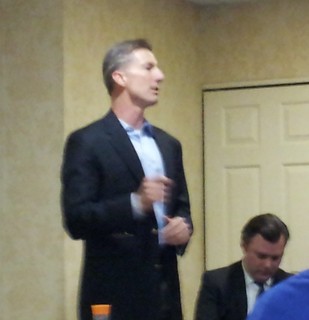 Conroy just announced his candidacy for Treasurer yesterday. He has served as a state representative for seven years (and was for a time a candidate for U.S. Senate in 2012 but left the face when Elizabeth Warren joined it). He emphasized his education and work experience in business and finance where he worked for many years. He said that business has changed for the worse in the past 30 years. It used to be that there was a balance among profits, customers and employees but now it’s all about profits. He wants to use the office of Treasurer to address income inequality. (Conroy website).