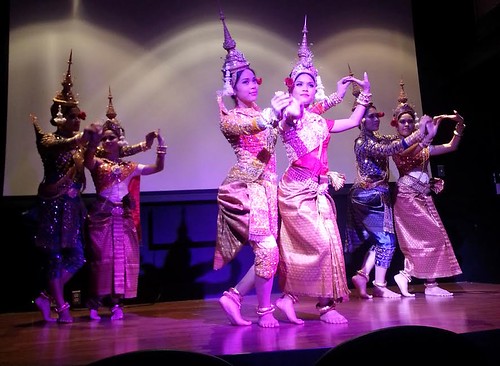 The following article about the ongoing film series on the Evolution of Cambodian Dance is cross-posted from the Khmer Post USA, the latest edition of which is now available online in PDF form.

It is an art form over a thousand years old that continues to engage and captivate audiences; both steeped in ancient tradition and the inspiration for contemporary artistic innovation. Tragically almost lost forever, the evolution of Cambodian classical dance has been a fascinating journey; one Lowell’s Angkor Dance Troupe is sharing through the power of film.

On November 19, Angkor Dance Troupe kicked off their Evolution of Cambodian Dance Film Series with the presentation of the 1965 documentary The Royal Ballet of Cambodia. The film traces the roots of Cambodian dance tradition from its origins in antiquity to its practices of the mid-20th century. The movie features both performances and behind the scenes activities of what it describes as “a unique contribution to the world’s culture.” Princess Bupphadevi makes a special appearance performing the Apsara Dance at the film’s conclusion. The movie was followed by a live performance by the Angkor Dance Troupe at the Lowell National Historical Park Visitor’s Center.

Tim Thou, founder of Angkor Dance Troupe, dedicated the film screening to his grandmother, Katna Poeu noting, “She was the driving force to my commitment to preserve the traditional arts of Cambodia.” During the post-performance discussion, the dancers reflected on their experiences, all expressing the deep honor they felt at the opportunity to perform the traditional arts of their ancestors.

While the first film examined Cambodian dance from its beginning, the next two movies in the series have a more modern and local focus. The series continues on January 21 with The Monkey Dance, a 2002 documentary following three teenage Angkor Dance Troupe members as they come of age in Lowell. On March 18, the Lowell-based Flying Orbs Productions will present a new film utilizing the traditional dance forms in modern artistic expression. All of the films will be hosted at the LNHP Visitor’s Center (246 Market St, Lowell) and will be free and open to the public. The Evolution of Cambodian Dance Film Series is co-sponsored by Lowell National Historical Park, Tsongas Industrial History Center, Massachusetts Cultural Council, and the Lowell Film Collaborative.

The mission of the Angkor Dance Troupe is to connect communities through the preservation, education and innovation of Cambodian Performing Arts. The troupe will be hosting its Annual Public Meeting on Sunday, December 8 from 2:30 to 4:00 at the Patrick J. Mogan Cultural Center, 40 French St, Lowell, MA. For more information, please visit: www.angkordance.org 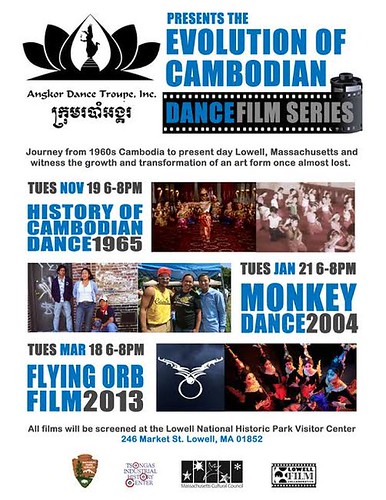