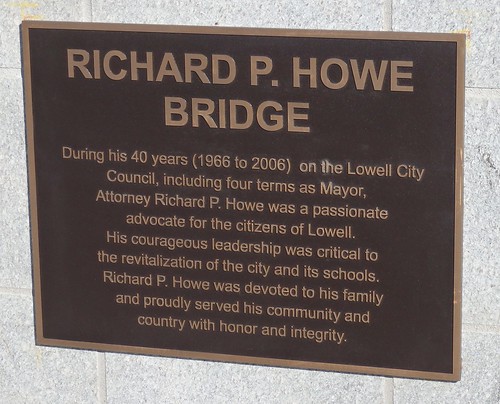 Plaque affixed to pillar on southeast corner of bridge 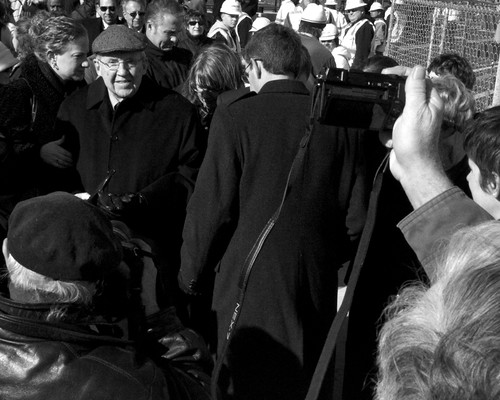 Thank you to everyone who helped make yesterday such a special occasion for my mom and dad and the entire Howe Family. From those who organized the event to those who endured the chilly wind by attending the ceremony, you have our enduring gratitude. And it was a wonderful ceremony held atop a structure that will soon be the place to stand for some of the most picturesque views in the city.

My sister Martha Howe spoke on behalf of our dad. Here are the remarks she made during the dedication:

I am honored to speak for my father and family on this momentous occasion of the opening of the Richard P. Howe Bridge. (I will be brief b/c its cold and my father always disliked long events.) My father is overwhelmed and truly honored to be here today. I would like to acknowledge other members of the Howe family who are here today.

• My father’s chief political strategist and wife of 56 years Mary Howe.
• My brothers Richard Howe Jr (and Roxane) and Peter Howe and his wife Roseanne.
• 4 of his 6 grandchildren are here – Peter Jr., Kimberley, Emily and Rachel Howe. Eric and Andrew Howe were not able to make it. .
• His sisters Kathy Navetta and Carol Collins
• Extended family, friends and the large contingent of lawyers from the Greater Lowell Bar.

We would like to thank the following for making today a reality.

• Rodney Elliott for making the motion to name the Bridge after my father and all the councilors who voted in favor.
• Chancellor Marty Meehan and all talented staff at UML,
• Congresswoman Niki Tsongas
• The State Delegation – Eileen Donohue, Kevin Murphy, Tom Golden and Dave Nangle.,
• DOT Administrator Frank DePaola and his team of engineers and staff
• City Manager Bernie Lynch and his staff and the City Engineer Lisa DeMeo and her staff
• Steve Stowell for his help w/ the plaque.
• Peter Aucella and the architects hired by the National Historic Park whose design complements the historic northern canal
• And finally Walsh Construction Company for constructing such a beautiful bridge.

We can think of nothing more fitting and appropriate to honor my father’s legacy then this beautiful bridge. A bridge is a pathway over an obstacle. For 40 years my father forged pathways over obstacles and his actions had historic implications for this City from the Arena, Ballpark, Settlement of Federal lawsuit that resulted in funding for 14 new schools. He believed politics was a noble profession. He spoke for people who had no voice. He challenged issues that needed to be challenged, even if it was not the popular stand. He never worried about the opposition in fact he welcomed confrontation and debate. He admitted to me the other day that it never came to fisticuffs, but as many of you know it came close a few times.

His fighting spirit and innate abilities transferred to and benefited every other aspect of his life including his work as a Trial Lawyer and his dedication to his family who are so very proud of him and so very honored to be here today. Thank you.

I would like to ask my father’s youngest grandchildren Rachel and Emily Howe to unveil the plaque. 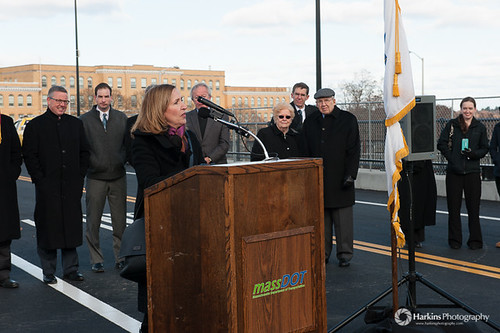 Martha Howe speaking on behalf of Richard P. Howe (to right rear next to his wife Mary) at the dedication ceremony. PHOTO BY KEVIN HARKINS

Finally, here are links to some of the great blog posts that described the event:

Jen Myers wrote about Richard P. Howe’s career and included some fantastic photographs she took in her Room 50 blog post;

Chris Scott, who was undoubtedly one of the Lowell Sun reporters my dad most enjoyed dealing with during his 40 years on the city council wrote about the event on his Column blog;

Kevin Harkins who photographed the entire event shares many of his pictures and some kind words about my dad on his website.

and Paul Marion brought his poet’s eye to the event and recorded his impressions earlier today.