At the 25th annual fall brunch this past Sunday, November 10, 2013, the Greater Lowell Area Democrats awarded their 2013 Distinguished Democrat Award to Gerry Leone, the former District Attorney of Middlesex County. The award was presented to Gerry by his former colleague and boss, Martha Coakley, the current Attorney General who is also a candidate for Governor. Coakley called Leone “an incredible friend and colleague who exemplifies people who first work in the DAs office and then run for public office.” She first worked with Gerry on the Louise Woodward case which involved the prosecution of a nanny accused of killing the baby in her charge. Coakley praised Leone for the work he did as DA not only in the courts but also in the schools and the community.

Marian Ryan, the person who succeeded Leone as the Middlesex DA and who is a candidate for the office in next year’s election, said the Middlesex DA’s office has always been a national model but that Gerry elevated it even more by requiring all the assistant district attorneys to get out into the community, to build private-public partnerships, and to put real effort into diversion and prevention programs as well as prosecution.

When Gerry got to the microphone, he said he was surprised he was being honored after he was out of politics. He said the thing he loved most about his 20 years in public life was the ability to help people as a prosecutor. He said his formula was to “care about people, serve them, and protect them, however you can.” He recalled when he ran for the office the first time, he was a non-politician up against six other candidates who all held or had held elective office. He said Lowell and especially Steve Panagiotakos, adopted him and became a big reason why he won the DA’s election and for that he will always be grateful. 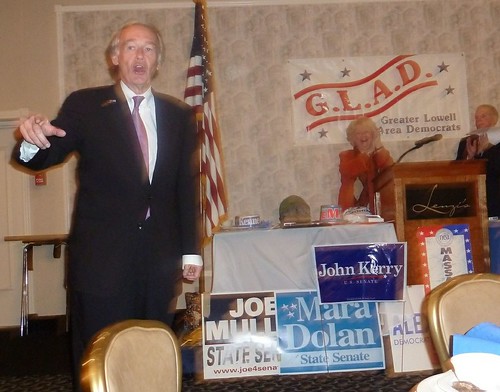