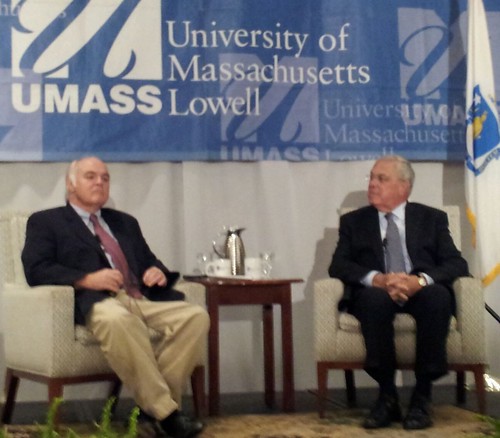 Boston Mayor Thomas Menino was the featured guest at today’s Lunchtime Lecture at the UMass Lowell Inn & Conference Center, presented by the Parker Lectures and UMass Lowell. Menino, who has been mayor of Boston for 20 years and has just 77 days left in office, was questioned by former Boston Globe reporter Brian Mooney, now a member of the university’s communications team. While Mooney’s 40 years of experience as a reporter were much in evidence in the content and manner of his questions, this was by no means confrontational. It was more of a conversation between two longtime competitors who exuded respect and affection for each other. Mayor Menino was great, mostly for his straight talk about the art of municipal governance.

The first question was about his successor. Mooney asked him to assess Marty Walsh and John Connolly. Menino said they were distinct individuals and he expected the outcome to be very close. He said Walsh has strong labor support but that Connolly’s secret weapon is an army of women who are focused on public education and who canvass the neighborhoods for Connolly all day long. Even when pressed by Mooney, however, the mayor would not give a hint as to who he will vote for on election day.

A big worry the mayor has is about the future of the public schools. He said that the public schools take everyone and educate everyone. He said other types of schools are more selective and only take those most likely to succeed academically, a fact often overlooked when the contrasting the various types of schools. He returned to the topic of education later in his talk when Mooney asked about his post-mayoral plans. Besides acknowledging that he will immediately leave on vacation and that he is now entertaining offers to become affiliated with either BU, Northeaster, Suffolk or Harvard, he said he’d like to devote some time analyzing the effect of money donated by corporations to the city and its schools for charitable purposes. Menino said it’s great the money is being donated but he’d like to come up with a way to “benchmark” the effect of the money.

Also, the mayor stressed that education is not just about the school; it’s also about where the kids come from. Many kids have no support at home. Providing that support has to be part of “public education.” It’s the responsibility of all of us to help these kids get what they need to succeed. While he commended Boston teachers, he was critical of leaders of the Boston Teachers Union for intransigence on the issue of extending the school day. He said the 6.5 hour school day is archaic and inadequate in today’s world and that lengthening the amount of time kids spend in school is critical to improving our system of education.

Regarding economic development, Menino said he always tried to be friendly to big business, higher education and health care because that’s where all the jobs are. People who come to school in Boston bring disposable income and they often stay in the city for their careers. He chuckled as he recounted the number of businesses that were enticed from Boston to the suburbs by tax breaks only to have those same companies now return to Boston because their potential employees want to live and work in the city and not in suburbia.

Mooney then asked if Boston risks becoming a city of the very rich and the very poor with no room left for the middle class. Menino said that was a real problem, one he tried to address in his recently released “Housing 2020” plan. He said the goal is to create “workforce housing” meaning housing that’s affordable for working class families. He was very critical of the Federal government for bailing out on cities. It used to be the Community Development Block Grants were plentiful and gave urban planners flexibility but the Federal government is not responding to the needs of the American people. He was very critical of the ongoing impasse in Congress, citing Tip O’Neill and Ted Kennedy as two who were fiercely partisan but who both worked with people they didn’t agree with to get things done. Menino said the job of a mayor is to get things done.

Somehow the conversation got into the environment as an issue. Menino said the biggest problem with that issue is the vocabulary: ordinary people don’t really understand how it adversely affects their lives. Leaders have to use words and concepts that connect with working people. And elected officials have to be willing to say things that are not popular. Your constituents expect to disagree with you. They want to challenge you and they respect you for standing for what you believe in. He cited his stands in favor of same sex marriage and against the South Boston St Patrick’s Day parade (because of its ban on gay participants) as representative of his philosophy that “I represent everyone.” He thought his biggest accomplishment was changing the image and the attitude of Boston. “When I took office, Boston was a racist city; that’s not the case anymore.”
Menino did say that the media “blows these issues up beyond what they really are.” He said that as an elected official, you have to stand up for what is right. That’s how you succeed in politics. “When you try to be cute you get in trouble.”

When asked about his health, Menino said he feels great and that the only residual effect of his past illness was some weakness in his legs. He is looking forward to resting because of the intense pace he has kept up for the past 20 years. He said he gets up at 4:30 in the morning and gets home at 10 every night. He does that because he “learns a lot from people.” He said you “can’t sit behind your desk and learn anything.” He said if you’re out in the neighborhood and people are crossing the street to avoid you, you know you’ve got problems. But if people are anxious to speak with you, it’s a sign everything is going OK.

The Mayor closed the session with a riveting account of his experience during the Boston Marathon bombing last April. He spoke about leaving the hospital to get back to work and recounted the dramatic moments, from the “Shelter-in-Place” order for Greater Boston to the capture of one of the suspects in Watertown. He also described the origin of the One Fund to help the victims (more than 100,000 people have donated to the fund). He realized right away that having one place for contributions would be the best approach, and it worked out well. He is concerned about the future needs of victims, however, and is thinking about what can be done next for them.

If you want to learn more about Mayor Menino’s philosophy of government with a dose of interesting political stories mixed in, you’re in luck. The Mayor has written an autobiography with the assistance of Jack Beatty. Called “Mayor for a New America”, the book is available for pre-order now on Amazon and will be published in the spring of 2014.

UPDATE: Coverage of the Menino talk can be found in today’s Boston Globe and Lowell Sun.