The following motion appears on the agenda of the upcoming October 15, 2013 Lowell City Council meeting:

This issue first came up at the council meeting this past Tuesday night. Here’s how I described it in my report on that meeting:

Councilor Elliott motion on procedure for handling emails sent to city councilors on city website. He says that he recently learned that the city manager gets a blind cc of all emails to councilors. Says he’s concerned that it’s an invasion of privacy of the senders of the emails. Elliott says he always understood the emails to be a confidential communication. The City Manager says he investigated it and the procedure was set up in 2005 (i.e., before Lynch was city manager). He says he does think it’s a good idea because many of the emails are requests for services and so if the city departments can get a head start on the problems it’s generally a good thing. He does say that the city manager’s office gets a cc of council emails but it doesn’t come to him. He says whatever the council wants is fine with him. (Ed. Note: All emails to anyone at city hall, councilor or otherwise, are public records that are public documents so they are not confidential). Chairman Mendonca asks Councilor Elliott if he wants to change the policy. He says he will file another motion on the topic. Councilor Kennedy says he has not problem with the manager receiving a copy but believes the senders should be made aware that is what is happening. Councilor Mercier says she didn’t know anything about what the “cc” is. Says if the sender wants something done, she wants the administration to start working on it right away.

As the “Editor’s Note” I inserted as I typed the above stated, any email sent to anyone who works for the city on a city computer is a public record that must be released upon a request under the state public records law. This is common knowledge, certainly of anyone working within government, so anyone feigning outrage over the “discovery” that emails sent to city councilors on the city computer system are not a private means of communication is either being deceptive or doesn’t have a basic grasp of the nature of online communications.

The discussion last Tuesday was also hindered by a not-very-accurate use of terminology as basic as “email” or “blind cc” which means “blind carbon copy”, a throwback to another era carried forward to the internet age which now means a copy of an email message is sent to a third party but the address of that third party and even the fact of the transmission to the third party is not evident to the named recipient of the message. When I hear “email” I think of the form that appears when I click the “compose” button on Outlook or Gmail or whatever other email application I’m using.

That’s not what’s going on at the city’s website as you can see from the following screenshots I captured from the city webpage. 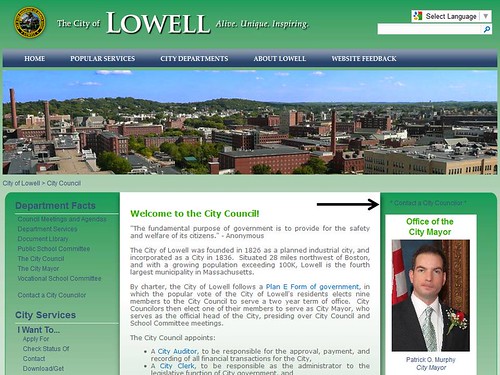 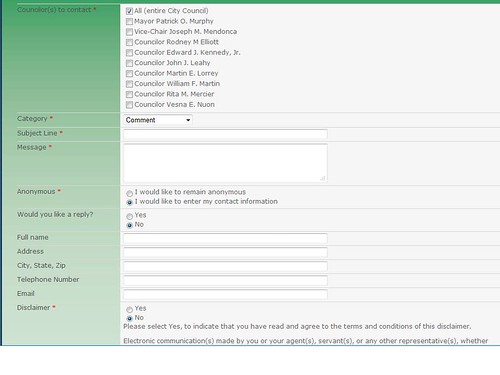 The form that appears (Not a standard email)

It’s not the common email format but instead a form to be completed. You choose one, some or all city councilors, you choose the category of communication (Comment, complaint, compliment, general feedback, general question, other), insert a subject line, the content of your message, then the form allows you to “remain anonymous” or to identify yourself.

Before you can send your message, you must click “Yes” to having read the disclaimer which includes the following:

Since that’s probably too small to read, here’s what it says:

No privacy guarantees are made regarding any communications submitted or otherwise sent to the City of Lowell via this or any other system; all communications are subject to public information requests and applicable state laws. Be advised that submissions do not guarantee responses, though a best effort will be made to do so, as appropriate.

Now this wouldn’t be the first time a city council got tangled up in technology. Back in the summer of 2008, the furor was about texting during council meetings and one councilor made a motion to ban the practice. Kevin Broderick, a prolific texter and not coincidentally the youngest member of the council, was the obvious target of the motion. Here are my notes from the meeting describing Broderick’s response:

Councilor Kevin Broderick, who many suspect was the primary target of this motion, acknowledged that he did occasionally use the text message capability of his phone during council meetings. He suggested that this issue was a case of some councilors being more comfortable than others with advances in communications technology. He acknowledged the need to update council rules to address the use of email and text messaging but said that many of his constituents contacted him via those methods and they expected a rapid response. Broderick also said he should be able to use the internet access provided by his cell phone to go online to retrieve information relevant to the matter being discussed at the meeting.

It’s ironic and a bit disingenuous that a system set up to aid city councilors is now being portrayed as nefarious behavior by this city manager. But it’s a convenient club for bashing the manager and so it and other issues like it will continue to be employed until Bernie Lynch departs.

10 Responses to Email and the City Council