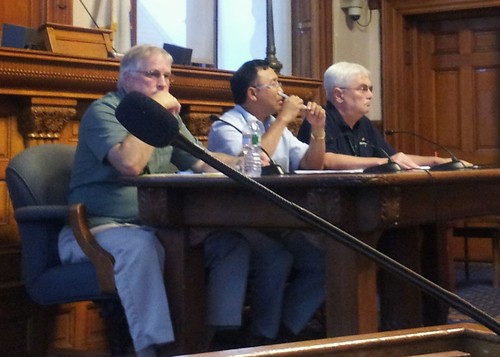 The Lowell Election Commission met yesterday at 4:45 pm in the City Council chamber at City Hall. The first item of discussion was “designated health care facilities” which involved the facilitation of absentee voting at nursing homes. The Commission and its corresponding Election and Census Office, do outreach and training at nearly a dozen nursing homes in Lowell to assist those who are unable to get to the polls in voting via absentee ballot. One unfortunate trend noted was that at two facilities, Fair Haven and Lowell Health, the number of absentee ballots cast went from several dozen at each facility in the 2012 state primary and general election to zero ballots cast in all three elections held thus far in 2013 (special US Senate primary, special US Senate election, city preliminary). The Commission will investigate the cause of this.

Next item was the order in which candidates will appear on the city election ballot. The longstanding practice has been for all candidates in a preliminary election to have their order of appearance on the ballot drawn by lot, but that in the general election, ballot order is determined not by lot but by the incumbents being listed alphabetically followed by non-incumbents also listed alphabetically. This has long been the procedure and it will remain so this year but may change in the future due to ambiguities in the governing law. Section 10 of the City of Lowell Charter specifically states that ballot order for a preliminary election shall be set by random drawing but the charter is completely silent as to ballot order for the city general election. State law says that in the absence of anything to the contrary in a city charter, state ballot law controls. State law mandates incumbents appear first on the ballot. Because the city of Lowell charter makes no mention of ballot order for the city general election, state law governs. Other cities do have charters that specify ballot order for the general so it would be possible for Lowell to change this, but not before the November 5, 2013 election. In a related matter, the only thing that will appear on the ballot is the candidate name, address, and if an incumbent, “candidate for re-election.” Other offices held or “veteran” will not be printed on the ballot nor will there be numbers associated with any of the names. Numbering the names was past practice, but it should not have been the case.

The Election Office is currently accepting applications for absentee ballots. As soon as the ballots are printed, they will be made available to those who must vote absentee.

The Commission then reviewed feedback that had been received from the conduct of the preliminary election. Issues such as better signage and lighting will be addressed for the general election. The fact that there will be no school that day (November 5) will alleviate a number of issues (i.e., voting at the Robinson School will be back in the cafeteria). There was also a discussion of the 20 “automark” machines that the city owns. These are available for people with no or low vision. There is ongoing training in the use of these machines and there should be one located at every polling location.

The Election Office then certified the final results of the preliminary election to the Election Commission. There is no set time for this certification but the Election Office aims for 15 days post election. The reason it takes even that long is that voters who appear at the polls to vote but who do not appear on the voting rolls are permitted to cast a “provisional” ballot. These ballots are segregated and each instance must be separately researched to determine whether or not the particular ballot should be counted. Once this process is complete, the various numbers of votes received by the respective candidates might change slightly (although in this election there was no change to the identity of the top 18 finishers). Provisional ballots often must be used in the case of people who move from one city address to another but who do not inform the election office. The voter shows up at his new polling station but does not appear on any list but after completing the appropriate forms (including an affidavit, I believe), he is able to cast a vote but that ballot is segregated and researched as described above.

“Inactive” voters are those who have failed to complete and return the annual city census. Voters in this category must simply sign an affidavit at the polling station and then they are able to cast a ballot in the usual fashion.

As for expected turnout in November, past turnout statistics suggest that 16% of registered voters will participate (that would be 8800 based on current registrations).

Finally, the Election Commission does have a vacancy due to the recent resignation of Mark Briere. Indications are that City Manager Lynch intends to fill that slot prior to the November 5 election.

The next meeting of the Election Commission is scheduled for Thursday, October 24, 2013 at 4:45 pm. I had never attended one before yesterday. Over the past few weeks I noted several indicators that the Election Commission and the Election Office were both making an effort to be more open and public about their respective activities so I decided to see first hand what was going on. Running an election is a tough task. It only happens occasionally but there’s much at stake. When margins of victory are comfortable, no one pays much attention to the mechanics of the election. But when only a handful of votes separate victory from defeat, microscopic scrutiny is cast on the conduct of the election. For that reason, the more open and inclusive the process of scheduling, planning for and holding elections can be, the better it is for everyone.