During my recent trip to Washington for the enshrinement of the Medal of Honor awarded to Lowell-native David McNerney in the Smithsonian Postal Museum, the extended McNerney Family and the surviving members of Company A, 1-8 Inf, 4th Infantry Division (the unit in which McNerney was 1st Sgt during the action that resulted in his medal) were invited by the Third Infantry Regiment to a special event at the Tomb of the Unknowns at Arlington National Cemetery. A delegation from Company A was permitted to lay a wreath at the tomb, and then the platoon sergeant of the Tomb Guard gave a briefing and answered questions about the history of the tomb inside the ceremonial museum room that is adjacent to the Tomb (all spectators of the changing of the guard at the Tomb stand on the front steps of this room which is not open to the public). Here are some of the things I learned about the Tomb followed by some photos of the ceremony:

Rain had threatened all day but it wasn’t until shortly before we boarded our bus that it started to come down. Not a downpour, but heavy enough to get you wet pretty fast. There were actually three luxury coaches, one for the family and two for Company A. They drove through Fort Meyer and right onto the grounds of Arlington Cemetery, parking next to the memorial amphitheater which is adjacent to the Tomb of the Unknown Soldier. We were escorted into a room at the front of the amphitheater, called the Trophy Room, I think, which was filled with photos and artifacts from and about the Tomb. The men of Company A were to lay a wreath at the Tomb so when that was about to commence, we all took our umbrellas and raincoats out onto the steps to watch. It was a very dignified ceremony with five men from Company A plus a 1st Sgt from the Old Guard who had long ago befriended David McNerney emplacing the wreath while taps was played by an Old Guard bugler.

Then it was back inside for a briefing from the Platoon Sergeant of the Tomb Guard Platoon. He told us many interesting details. When the World War One veteran was interred, the original monument was just a flat marble slab with a road passing in front of it. People often used it as a place for picnics. An old Navy veteran took it upon himself to stand over the monument and tell people of its significance. Eventually, soldiers stationed at adjacent Fort Mayer were assigned to guard the grave. The duty rotated between an infantry and a cavalry regiment. The cavalry troopers wore spurs all the time so their footwear made a distinctive metallic click when they came to attention. To honor those early tomb guards, today’s troops were metal heel guards to duplicate the sounds. Today the guards are there 24 hours per day, seven days per week. The guard platoon consists of 25 members who work in shifts of seven. During the day they wear dress blues but when the cemetery is closed they switch to normal fatigue uniforms. This gives them time to care for their dress uniforms. The tomb guards are all members of the Third Infantry Regiment (the “Old Guard”) who go through a rigorous application process. The duty is “branch immaterial” so there have been medics, signalmen and soldiers with specialties besides infantry. Although none of the current tomb guards are female, there have been several in the past. The guard routine at the tomb consists of 21 paces across, then staying in place for 21 seconds and repeating. This is in recognition of the traditional 21 gun salute. Tomb guards are assigned to the duty for approximately 18 months. This allows them to continue their military career with other assignments. It also reduces the incidence of repetitive motion injuries from performing the same routine over and over again.

Each of the Unknowns was awarded the Medal of Honor and those four medals, one each for World War One, World War Two, Korea and Vietnam, were displayed inside. While there are actual human remains for the Unknowns of the first three conflicts, the body that was interred from the Vietnam War was subsequently identified through the use of DNA and was then disinterred and moved to a military cemetery in Missouri at the request of his family. Because of better record keeping and advances such as DNA testing, the Platoon Sergent suggested that it’s unlikely that any additional remains will be added to the Tomb. Instead, future conflicts will be recognized symbolically with the Tomb representing those whose remains were never recovered. 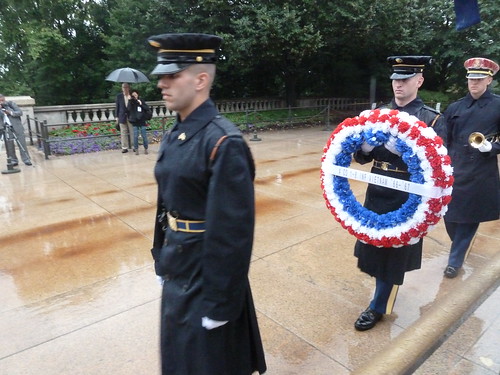 The wreath to be placed by the men of A Company 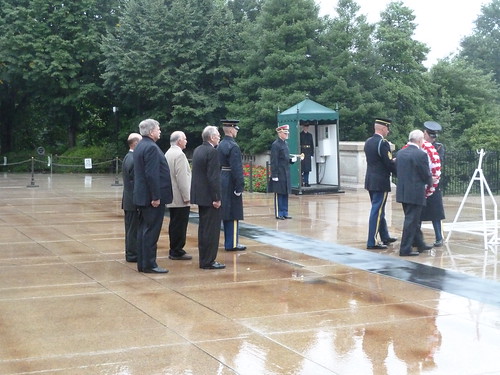 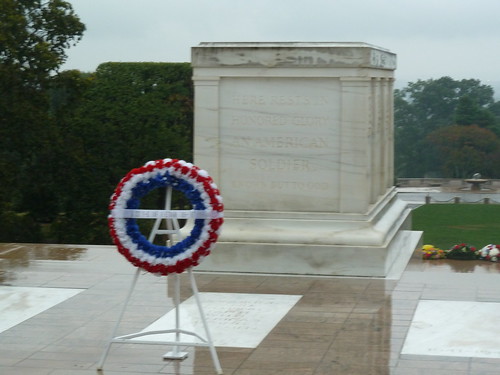 Wreath placed by A Company 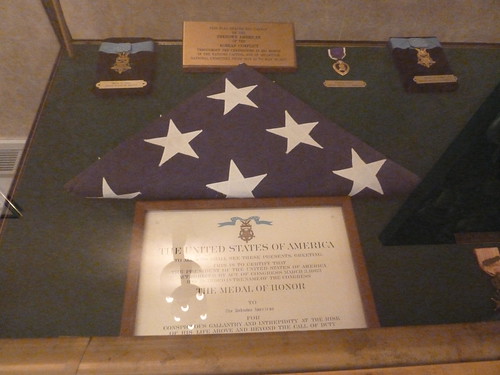 Medal of Honor presented to the Unknown from the Korean War