Once you get out of the tourist areas in Germany and into the smaller cities and towns, every gasthaus (a small, local restaurant that also serves prodigious amounts of beer) has a stammtisch. A stammtisch is a table, usually round, that is positioned near the entrance that is occupied by and only by “the regulars” of the establishment. The stammtisch is usually identified by some ornament like a bell or at least a sign, but you don’t really need the sign because you just know which table is the stammtisch and no one but one of the regulars would ever sit there.

Every time I enter Lowell’s Owl Diner for breakfast, I’m reminded of the German stammtisch. Right at the entrance to the dining area of the Owl sits a big round table that’s always occupied by the regulars. It’s a group of Lowell guys who have known each other since high school at least. Politically, they lean right of center but on Wednesdays ideology is left at the entrance and the prior evening’s city council meeting dominates the discussion.

I always try to stop to talk with the guys who sit at the big round table at the entrance to the Owl Diner. Sometimes we talk real estate, sometimes history, but politics not so much. Still, I know that they regularly read the local newspaper and listen to the local radio station. They probably don’t read blogs, but my sense is they’re aware of what’s being said online about local politics. I’m quite sure that they also know of my good friend, Jack Mitchell, who uses Lowell’s blogosphere to share his opinions about local politics, opinions that probably differ substantially from those held by the regular occupants of that table.

And so when I walked into the Owl Diner this evening for city council candidate Derek Mitchell’s excellent meet-the-candidate event, I laughed when I saw Jack (no relation to Derek) Mitchell holding court at the Owl Diner’s stammtisch. He looked quite comfortable sitting there. I had to wonder if his choice of seats was a coincidence or a signal? 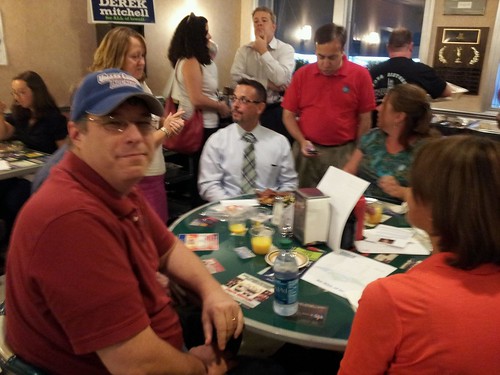 One Response to Stammtisch