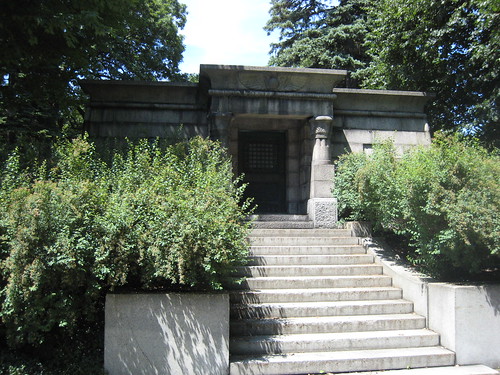 One of the regular stops on my walking tours of Lowell Cemetery is the receiving tomb. Located in the middle of the cemetery, the door of this large mausoleum bears the following inscription:

Freeman Shedd grew up in Lowell and began working in a drug store at a young age. After service in the Civil War, Shedd returned to the drug store which he and his good friend and co-worker, Eli Hoyt, eventually purchased from its owner, a Mr. Staniels. While the drug store was a success, a cologne for men that Hoyt had concocted became a gold mine with the help of Shedd’s marketing genius. They soon gave up the drug store, manufactured cologne full time, and both became incredibly wealthy.

Great wealth did not insulate the men from tragedy (Hoyt died at age 48 of tuberculosis). Shedd’s young son, who had been named for his father’s business partner, died at age 8. The boy’s grieving mother and father built the mausoleum pictured above in his memory. Eventually, the family built another mausoleum near the Rogers Street side of the cemetery next to the great open space that Freeman Shedd would bequeath to the city of Lowell in his will (subsequently named “Shedd Park” by the city). The boy’s body was moved to the new mausoleum and the old structure was donated to the cemetery which renamed it the “receiving tomb.” In an age before jack hammers and backhoes, graves could not be dug through the frozen winter ground, so the remains of those who died in that season were stored in the receiving tomb until the ground thawed in the spring.

When Shedd constructed this first mausoleum, symbols of ancient Egypt were commonly used in cemetery art. The Shedd/receiving tomb had many such symbols incorporated in its design including two bronze sphinxes sitting on stone pillars at its entrance. In the 1970s, one of the sphinxes was stolen and the other was placed inside the mausoleum for safe keeping (see photo below). It has long been the intention of the cemetery to create replicas of the sphinxes from less expensive modern materials and restore the mausoleum to its original appearance.

That’s a story I share on my cemetery tours. Two years ago, a participant in one of those tours was Christopher Hansen, a professor of mechanical engineering at UMass Lowell. After hearing the story of the missing sphinx, Hansen contacted the cemetery and offered to have some of his students, as part of a senior engineering project, use modern technology and materials to construct the replica sphinx. Julia Gavin, writing for the UMass Lowell website, recently posted a fascinating account of how that project is proceeding.

For those interested in learning more about Lowell Cemetery, our fall tours will be held on Friday, September 27 at 1 pm; Saturday, September 28 at 10 am; Friday, October 4 at 1 pm; and Saturday, October 5 at 10 am. The tours are free and open to the public, require no advance registration, begin from the Knapp Avenue entrance right next to Shedd Park, and consist of 90 minutes of walking through the cemetery, rain or shine. 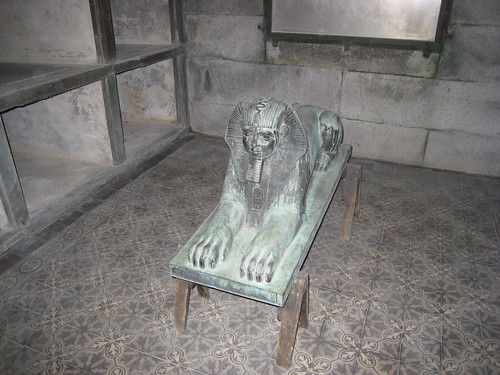 2 Responses to UMass Lowell and the Lowell Cemetery Sphinx