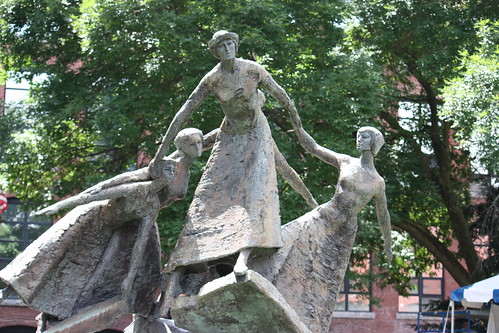 Last month I had the good fortune to spend a week in Berlin, Germany. It’s an amazing city and its multitude of iconic buildings and public statues make it resemble one giant museum although it has plenty of those, too. It’s almost as if during the Cold War when there were two Berlins, both sides competed to see which could have the finest museums. When the Berlin Wall finally came down and the city was reunified, all the museums stayed open so there are double the number you might ordinarily find.

Every museum I did visit, however, had some sign or plaque describing how much of the institution’s original collection was destroyed or lost during World War Two. These reminders of culture destroyed weighed heavily on my mind even after my return and so when I found myself in a local bookstore staring at a book called “The Monuments Men” (2009 by Robert M. Edsel), I snatched it up and zipped through it in a couple of days. The book tells the story of a little-known unit of the Allied Army in Europe that was known as the Monuments Men. The unit was small, only a couple of dozen men by the end of the war but less than ten through most of the fighting. The men assigned to the unit were museum curators, architects and artists who brought with them an impressive understanding of the world’s artwork, but also a practical knowledge of how it should be safeguarded. Their mission initially was to advise Allied commanders on how to avoid or minimize damage to items of great artistic and cultural import that fell within their area of operation, but once the scale of the Nazi looting of Europe became known, they morphed into detectives trying to recover and rescue the cultural heritage of Western Europe. While the Monuments Men received little attention during and after the war, that might change significantly this Christmas with the release of a movie by the same name. Since it stars George Clooney, Matt Damon, John Goodwin, Bill Murray and many other well-known actors, it should get plenty of attention. (see movie trailer below).

Coming right on the heels of reading The Monuments Men, national outlets brought news of the bankruptcy filing of the city of Detroit. As in any bankruptcy filing, the bankruptcy trustee must first value the property of the person or entity filing. One of the most valuable assets in that pool is the Detroit Institute of Art, rated one of the top five art museums in America, which is owned – building, paintings, everything – by the city of Detroit. That presents the question: should the paintings of the museum be auctioned off to pay the city’s debts? The reflexive answer most would have is “NO” but I think it’s more complicated than that. What if selling the artwork is needed to pay the pensions of retired workers who depend on those pension checks for their very survival? It’s a tough and complicated choice. It’s also the type of choice that even communities that are not in severe financial distress face with some frequency.

Consider the construction of a new municipal building which in my mind at least should absolutely be considered a work of public art. With the overriding pressure not to raise taxes for any reason, however, there is great pressure to cut design corners to save money. That approach inevitably proves short-sighted and more expensive in the long run. We have at least two examples of that right here in Lowell: the police station built in 1970 and the high school addition built in 1980. Besides never looking very attractive, both are now desperately in need of replacement because of corner-cutting in design and construction.

This civic short-sightedness isn’t necessarily limited to buildings with a particular day-to-day functionality. It also extends to things like public artworks, parks, pathways, things that subtly improve the quality of life of a community in the long run but might not be seen as affordable in the short run. Lowell had a great spurt of investment in public art a few decades ago. Led by Paul Tsongas and others, the city and its supporters installed numerous sculptures such as Homage to Women (shown above) around the downtown. Interest in those things rises and falls. Ironically, all the attention the city devotes to the cultural economy (a strategy I fully support) might have the unintended consequence of drawing attention away from public art. When the city is steeped in private artists producing and selling their works, perhaps the impetus to add to the public art collection is somehow diminished.

History shows that attention to public art too often arises only when that art is lost or at risk of loss. Thinking about it ahead of time and reminding everyone of its value and its importance to the community on a regular basis is the best strategy for avoiding such a crisis.

2 Responses to The Place of Public Art in a Community