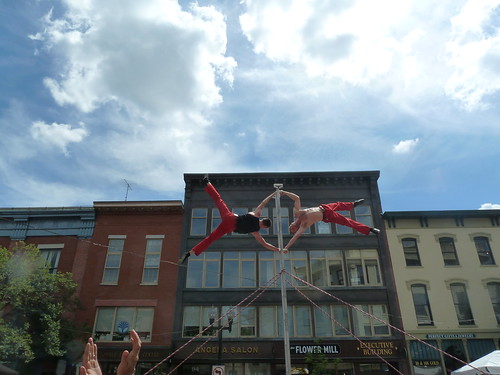 Some observations after five hours of festivaling today: the weather, crowd, talent, food and visitors were all great. I especially enjoyed the amazing Red Trouser Show, the street acrobats who performed in the middle of Merrimack Street (at intersection with John). They did a lot of juggling, backflips and other ground-based stunts but it was when they mounted their tall aluminum ladder that pointed straight to the sky that their talent and athleticism really was apparent. Having these street performances at Merrimack and John has been a great recent addition to the festival. 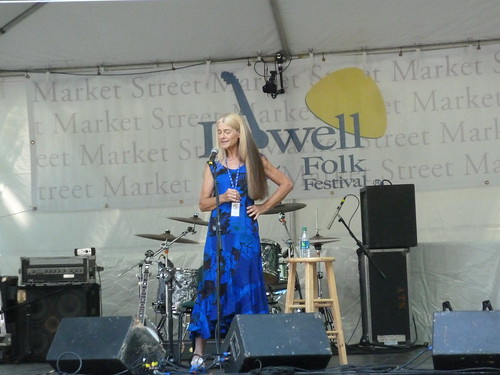 The first act we saw was story-teller, balladeer Sheila Kay Adams at Market Street Stage. Her songs were thoughtful, funny, emotional and were truly stories put to music. When I think about folk music, this is what I picture. We also sampled many others, all good, including Nathalie Pires (Portuguese fado), Junior Sisk and Ramblers Choice (bluegrass), the Chankas (Peruvian scissor dance) and Martin Hayes & Dennis Cahill (Irish). 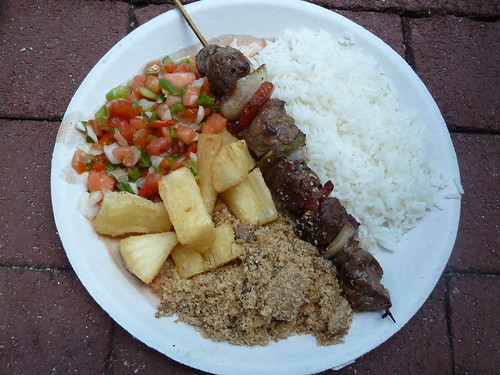 It wouldn’t be a Folk Festival without ethnic food. For lunch I had Brazilian, with beef kabob, rice, “bacon flour” (which I took to be chunks of bacon and bacon drippings mixed with flour), fried yuca (crispy on the outside, soft and sweet on the inside) and what was called a “vinaigrette” (more like a salsa with chopped onions and peppers with oil and vinegar). 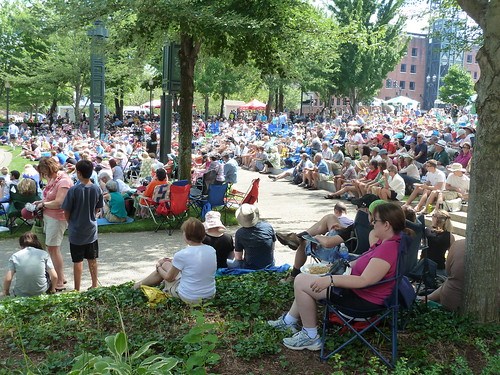 The crowd was good-sized and certainly had to be aided by the great weather. I saw a good amount of Lowell people but also many who looked like festival-ites from across the region. There were a lot of dogs; all well-behaved. And a lot of security, a lot more than ever before. It wasn’t intrusive. It was just there. A consequence of the Boston bombings, I suppose. As for political figures, I crossed paths with council candidates Derek Mitchell and Bill Samaras. I’m sure there were others there but I didn’t bump into them. Check back tomorrow night for a Sunday report.