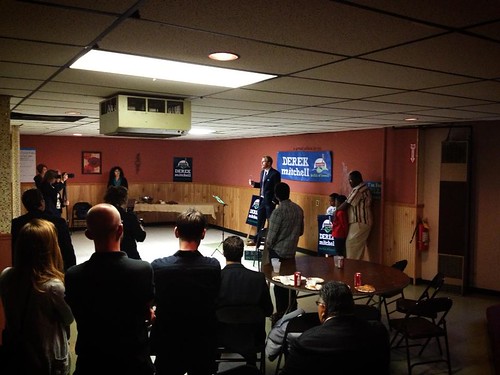 Last night was a busy one for the politically inclined in Lowell with State Senator Eileen Donoghue hosting an event at Cobblestones, City Councilor Bill Martin hosting another at Long Meadow, and Council candidate Derek Mitchell having a campaign kick-off at the Club Passe-Temps on Moody Street. Those trying to visit either of the two downtown events found their journey made more difficult by a traffic jam of historic portions caused by thousands of mostly out-of-town visitors making their way to the Tsongas Center to see Dr. David Jeremiah who “has been a teacher of God’s Word for over forty years” and who clearly has the ability to attract an impressive crowd.

I made it to all three events but spent the longest time at the Passe-Temps Club which is at the corner of Moody and Cabot, just a couple of blocks west of City Hall. It’s rightfully described as being in the Acre, but a half century ago that would have been incorrect, because back then that side of Merrimack Street and all the land extending to the river, was known as Little Canada, a neighborhood of tightly packed triple deckers that was bulldozed in a still controversial Urban Renewal project in the early 1960s.

In his remarks, first-time candidate Derek Mitchell emphasized the symbolism of holding his kick-off event in that part of the city. The Acre has always been the entry point for each group of immigrants to arrive in the city and every one of them has left its mark on the neighborhood as it was displaced by the next group to arrive. While stories of friction get the most attention, I believe cooperation and mutual assistance between different groups was the rule. Derek Mitchell sees this as Lowell’s past, but also as Lowell’s future, hence his campaign slogan, “For All of Lowell.” The crowd he attracted (and it was a large one) was young, diverse and, for the most part, not one you would see at most other political events in the city. Whether that translates into a winning number of votes in November is the challenge Derek faces over the coming months.

Speaking of November, it’s increasingly likely that we will have a primary election. I believe our city’s delegation to the State House has made it clear that they will no longer file last minute measures to waive a primary, so if 19 or more candidates turn in the 50 signatures needed to gain a spot on the ballot, we may have two elections this fall. The following is my list of candidates which already contains 17 names. I hope I haven’t forgotten anyone so please let me know if I have. The names are listed as they would appear on the general election ballot with incumbents coming first followed by challengers with both groups ordered alphabetically.