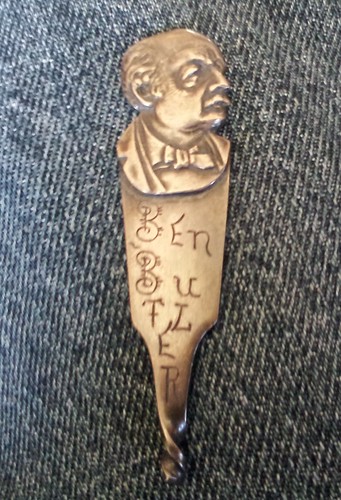 While roaming around the city on foot recently a resident I met showed me the above artifact and asked if I could help identify it. I placed it on my knee and snapped a photo with my phone. The item is about 2 inches long and one-half inch wide. It’s made of metal but not of anything particularly valuable. It clearly has the image of Ben Butler and his name inscribed on it. On the back are the words “Patent Pending” so it’s probably a mass produced item. The owner of the artifact found it in a load of loam that was delivered more than 40 years ago.

My preliminary search on the web yielded the below image of a Ben Butler spoon. According to the antique dealer website that hosts this photo, the spoon is inscribed on the back “Sterling Silver – Patent Pending”. Could the above item be a similar object that was bent in half and then broke? Because it wasn’t valuable to its original owner, the pieces were pitched into a trash heap that a century later became a loam pile. One weakness of this theory is the twist in the metal at the bottom of the object. It looks too symmetrical and designed to be the result of some random twist.

Still, a Butler spoon has much historic support. When Ben was assigned to New Orleans as military governor after that city’s capture by the Union in 1862, residents complained that Butler frequently helped himself to the silverware of the several mansions he used as headquarters. This alleged pilferage earned him the nickname “Spoons Butler.”

Any ideas about the identity of this thing?

One Response to CSI Ben Butler