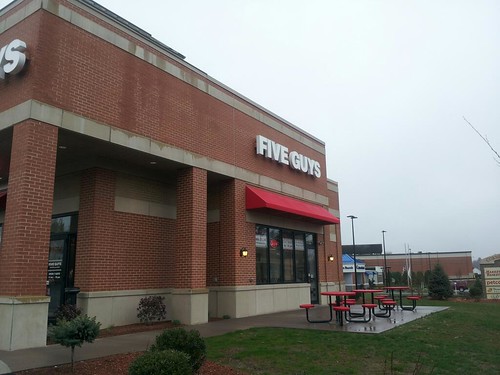 Driving home from a meeting in Worcester one day last week, I exited Route 495 at Boston Road Westford to grab a late lunch. There are many quick and casual dining choices just off the highway, but I had heard there was a Five Guys Burgers franchise in the vicinity. Sure enough, after leaving the highway and driving south towards Route 110, the Five Guys sign was visible on the right, part of a large complex of retail outlets known as Cornerstone Square.

Visually and functionally, Five Guys is more McDonalds than Friendly’s. You approach a counter just inside the door and place your order, aided by the large menu board permanently affixed above the employee who takes your order. Because the food is not pre-made, you’re given a receipt with your order number, and empty drink cup to fill at the communal dispenser, and you then sit down at one of the two dozen tables inside the establishment. Large sacks of potatoes and canisters of peanut oil piled amidst the tables give the place a slightly rustic feel. Soon your number is called, you return to the counter and take the brown paper bag containing your food.

The menu is focused – several variants of burgers plus hot dogs and veggie and grilled cheese sandwiches. There are also french fries, “five guys” or cajun style. There are many toppings, all free, which you use to customize your burger when you place your order. I had a “Little Cheeseburger” which was a single adequate sized hamburger patty with a slice of melted cheese. The burger, though thin, was juicy and the roll was amazingly fresh. I ordered lettuce, tomato and mayo and that was all served accurately. I ordered the “regular” sized fries which yielded enough for about four servings. The fries were thick, hot and had the potential to be very tasty, but mine were dredged in so much salt that they were nearly inedible. I’m assuming that was a result of a server with a too heavy hand on the salt shaker, so I’ll wait until my next order of fries from Five Guys to pass final judgment. The burger, fries and a medium soft drink cost just over $10 with tax.

If you’re looking for a quick burger and fries that does a better job of camouflaging the industrial output look, feel and taste of what you get at McDonalds, Five Guys is a good choice. I will definitely try it again.