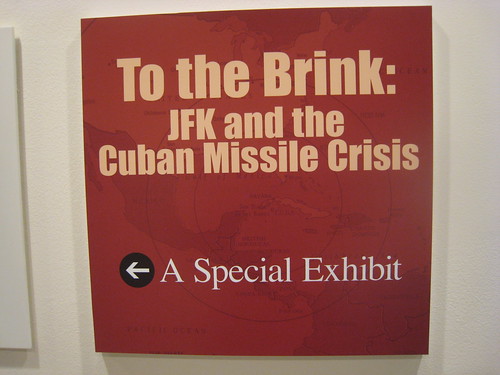 With each passing day the Cold War seems to slip further into historical obscurity which makes exhibits like the one that just opened at the John F. Kennedy Library, “To the Brink: JFK and the Cuban Missile Crisis“, all the more important. When I saw a review of the exhibit in the Globe earlier this week and knowing I had to be in Boston on other business this afternoon, I decided to drive in early and visit the library.

Walking into the special exhibit space, a visitor is greeted by a 1962 vintage television replaying President Kennedy’s address to the country, announcing the presence of the missiles and his determination to force their removal, but warning Americans to be ready for the challenges that might result. Those challenges, as the rest of the exhibit makes clear, could very well have been the death of 80 million people in a thermonuclear war.

The highlight of the exhibit to me was snippets of secret audio recordings made by Kennedy of the debate over the American response among his cabinet. In four different alcoves, visitors are invited to press a button and hear the actual tapes with a video screen showing a photo of the speaker and a transcript of the words being said. The most memorable portion had the nation’s top generals vigorously urging the president to bomb and then invade Cuba. In response, Kennedy walked through a chilling script that would have Soviets in Cuba killed by the bombing, Khrushchev retaliating by attacking Berlin, and Kennedy forced to respond with nuclear weapons against the Soviet homeland. Standing there, listening to their voices, you get a sick feeling in your stomach when you realize how easily this all could have spun out of control.

“To the Brink” will be at the JFK Library until December 1, 2013 and it is well worth the drive in. I recommend going on a Sunday morning, as I did today. Leaving my driveway in Lowell at 8:20 a.m., I was pulling into the library’s Columbia Point parking lot at 9:05 a.m., just five minutes after the museum opened for the day. For the first hour, I had the exhibit space entirely to myself as if on a private tour (the museum filled up later). Whether you lived through the Cold War or merely have read about it in history class, a visit to this exhibit will be a very powerful experience, one you should not miss. 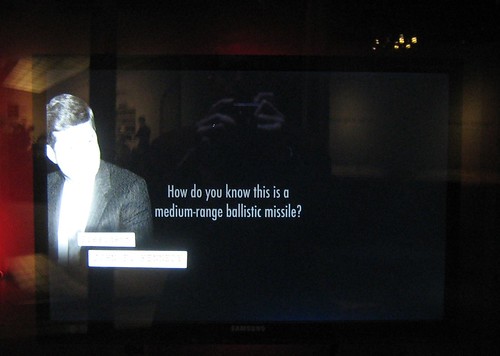 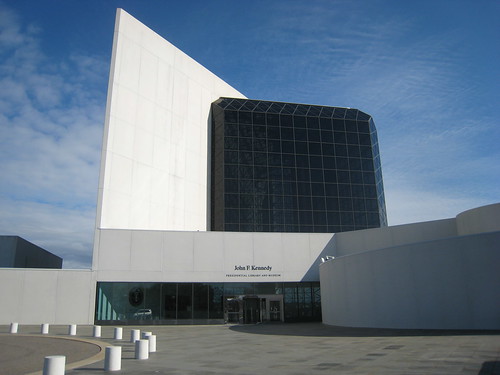