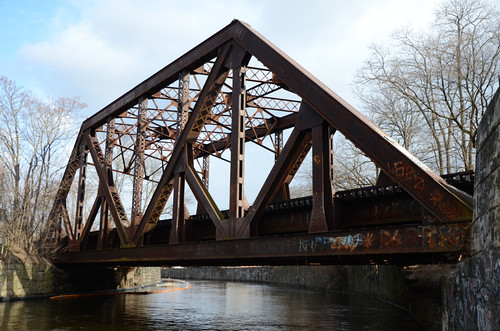 Photo and text by Tony Sampas.

The Red Bridge is located near Pevey and Kyan Streets, is forty feet in height and spans 160 feet over the Pawtucket Canal. Its current owner is the Boston and Maine Railroad. From the Lowell Cultural Resources Inventory, Shepley Bullfinch Richardson and Abbott: “The bridge is skewed to cross the canal on a diagonal forming a parallelogram in plan. The truss is a Baltimore through truss of riveted construction. It is composed of both plate and lattice girders. Each chord intersection is bolted to an individual granite pier, with further support provided by reinforced concrete abutments…As early as the 1841 map, a railroad bridge is shown crossing the Pawtucket Canal at this point. The present bridge was designed in 1883 by the chief engineer of the Boston and Lowell Railroad, Edward S. Shaw. The Boston Bridge Works erected the bridge in 1884. In 1928, the same company rebuilt the bridge, replacing most of the original lattice girders with plate girders.The concrete abutments probably date from that rebuilding as well. The bridge apparently was painted red in 1928, for it is labeled “Red Bridge” on a photograph of that date.