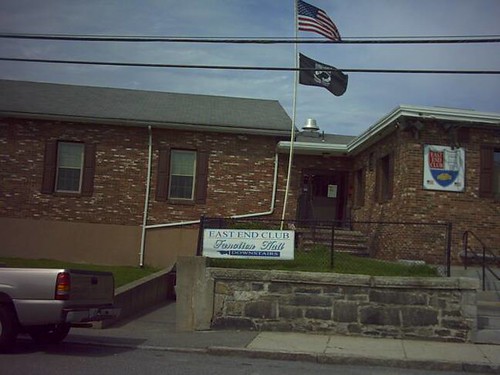 The Lowell Democratic Caucus will take place tomorrow (Saturday, February 23, 2013) at 10 am at the East End Club which is located at 15 West Fourth Street in Lowell. Coming from downtown, cross the Bridge Street Bridge into Centralville and continue on Bridge Street until you reach West Fourth. Turn left and the club’s parking lot is on your left. The caucus will be in the ground floor room of the club, the entrance to which is to the left of the cement wall of the photo above.

The intensity of competition for delegate slots varies from year to year. In a gubernatorial election (such as next year), competition for delegate slots will be fierce since Democratic Party rules require a candidate for statewide office (governor, lieutenant governor, etc) to gain the votes of at least 15% of the delegates at the state convention. Those of you who were involved early in last year’s election might recall that Marisa DeFranco was a Democratic candidate for US Senate along with Elizabeth Warren but DeFranco failed to get the required votes at the state convention and was therefore not allowed to appear on the ballot in the primary election.

In an “off year” such as this, becoming a delegate will be far from automatic, but it will be much easier. In the past, some less politically active wards have had no delegates. One downside to being elected a delegate is that you have to spend an entire summertime Saturday inside at the convention and pay the state Democratic Party $75 for the privilege of doing so. This year’s convention will be held in Lowell at the UMass Lowell Tsongas Center. Originally it was scheduled for early June but it was postponed until Saturday, July 13 although it’s still in Lowell. While this year’s convention won’t be nominating anyone, it does serve as an opportunity for prospective statewide candidates for 2014 to introduce themselves to the most politically active members of the party. For instance, it was at the off year convention in Lowell in 2005 that Deval Patrick burst upon the state political scene with a riveting speech that immediately cemented the support of many of the delegates that year.

Back to tomorrow’s caucus: When you arrive at the East End Club you’ll be directed to the round banquet table that has been assigned to your ward. (If you don’t know your ward, someone there will have the voting list and can look it up). The “ward chair” runs the individual ward caucus. He or she will have everyone sign in then will ask for nominations for delegates. If there are more nominees than there are delegate slots, there will be a quick election and whoever gets the most votes is the delegate. The delegate allocation by ward has to be gender balanced so if there are six delegate slots, three must be men and three women.

In between all of this, there will be ancillary activity brought on by this year’s special Senate election. Representatives of the Markey and Lynch campaign will be collecting nominations signatures and perhaps surrogates of the two candidates will be allowed to speak as will some of the other elected officials in attendance. It’s a very informal, friendly event. If you have any interest in politics, this is a good place to meet others with similar interests.

For those of you who are already committed to Ed Markey in the US Senate race, we ask you to show up at this caucus, participate, and then huddle immediately afterwards to discuss future events. After that, we’ll hit the streets of Lowell for one final push for nomination signatures.