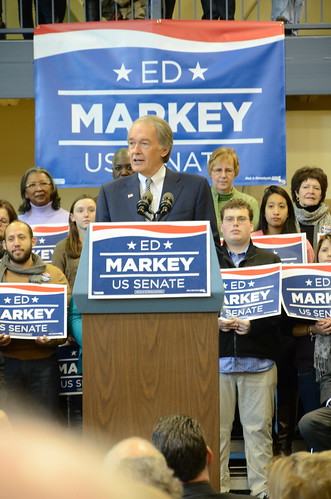 Early yesterday morning I headed to Malden for the formal announcement of Ed Markey’s candidacy for U.S. Senate. The event was at the Malden YMCA which is a very impressive facility. I volunteered to help with settup and so arrived two hours before the scheduled start time. This gave me a chance to meet some of the campaign staff and chat with enthusiastic Democrats from around the state. (I was flattered that several from places far from Lowell asked after hearing my name “are you the blogger?” although Left-in-Lowell still has a greater brand identity in state progressive political circles).

I won’t hazard a guess as to attendance other than to say a large gymnasium plus the overhead running track were packed with people. A bunch of elected officials were present to support Markey’s candidacy with the most notable for our purposes being Middlesex County Sheriff Peter Koutoujian and State Senator Ken Donnelly (whose district includes Billerica).

Markey bounded onto the stage to thunderous applause. Accompanied by his wife, his two brothers and their spouses, he launched into his remarks, pledging to “give all people access to the American Dream” and promising to “advance President Obama’s agenda”, a specific refrain heard repeatedly throughout the speech. He warned of “Tea Party extremists” in Washington trying to “slash Medicare and Medicaid”; of Big Oil trying to stop the clean energy revolution and he promised to beat back the NRA and to ban deadly assault weapons.

He said that Massachusetts has a history of electing Senators who were not afraid to lead on controversial issues. “I will run in that tradition.” he said.

Continuing on to the environment, an issue on which Markey has long been considered a national leader, he used his familiar line: “The planet has a fever; there are no emergency rooms for sick planets; we need a green revolution.” Next, Markey advocated a Constitutional Amendment to reverse the Citizens United decision of the U.S. Supreme Court which allowed unlimited corporate expenditures on elections. Markey wrapped up by reminding everyone that “I helped Barack Obama and Ted Kennedy pass health care reform” (leaving unsaid that his Congressional colleague and opponent in this race, Steve Lynch, voted against the Affordable Care Act) and pledging to help make health care a right and not a privilege.

The speech was met with enthusiastic applause by all in attendance. When it was over, Markey descended the stage and circle the crowd shaking hands. As the crowd thinned out, the Greater Lowell contingent gathered in the back of the room to compare notes. A gentleman wearing a suit and a familiar face sought us out. It was John Markey, the candidate’s brother. John introduced himself to us and shared some great stories about his past involvement with Lowell politics. Most notable was that he himself was a candidate in 1978 for the Fifth Congressional District in the year that Paul Tsongas vacated the seat to run for the very same U.S. Senate seat Ed Markey now seeks. John, who was living in Lawrence at the time, finished fourth in the Democratic primary, partly due to some rough treatment at the hands of the Lowell Sun (the more things change . . .). Below is a relevant excerpt from our Elections Page about that 1978 race – some very familiar names including one recently in the news:

Tsongas’s run for the Senate left the Fifth Congressional District without an incumbent. Some well-known names appeared amongst the candidates to succeed Tsongas:

In the Republican Primary, John Buckley of Lawrence defeated Nick Rizzo of Andover, 11,772 to 9881. In the general election, Shannon defeated Buckley, 90,256 to 48,685 with Independent Jay Gaffney of Tewksbury receiving 33,835 votes.

We also learned that the Markey connection to Lowell continues to a new generation. We met John’s son (the candidate’s nephew) who is currently a student at UMass Lowell and who no doubt will be active in the coming campaign.

If you are interested in supporting Ed Markey in his run for the U.S. Senate, please visit our Lowell for Ed Markey page and “like” it and send me an email at DickHoweJr[at]gmail.com and I’ll help you get started. 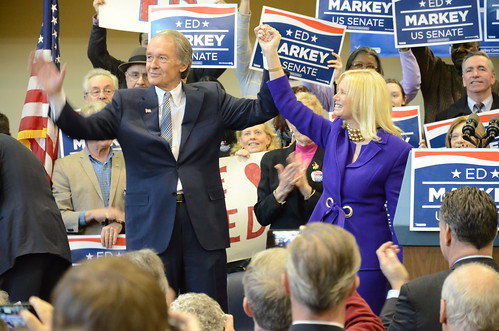