In today’s Column blog, the Sun’s Chris Scott writes about the ongoing construction of the Richard Howe Bridge and about the man for whom the structure is named, Richard P. Howe Sr. (who is also my dad). The first few paragraphs of Chris’s post and a link to the full story follow the picture: 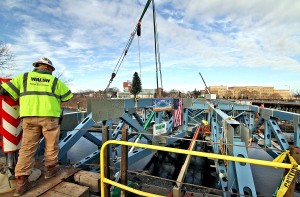 The bridge that will carry his name, now under construction over the Merrimack River, also reached a milestone Tuesday. The last gigantic piece of its blue steel under-carriage was delicately guided into place by burly Walsh Construction Co. ironworkers.

Mike Verseckes, a spokesman for the Massachusetts Department of Transportation, said the $32 million project that will connect Merrimack Street to University Avenue at UMass Lowell — while replacing the commonly known University Avenue Bridge just downstream — is on schedule for completion in September 2014.

Over 40 years on the City Council — with eight as its mayor — Howe proudly carried the reputation of a contrarian, particularly if the adversary was a city manager.

But he’s not opposed to having a bridge carry his name. (read the rest HERE).

2 Responses to Chris Scott writes about the Richard Howe Bridge