In a ceremony on Thursday, October 1, 1942, at 3 p.m., Rear Admiral W. J. Carter, (S.C.) U.S. Navy, presented to F. A. Flather of the Boott Mills a red, white, and blue pennant representing the Army-Navy Production Award for high achievement in the production of military material needed for the war effort. As the U.S. Regimental Band played “Anchors Aweigh,” four workers raised the pennant above the mill: Christine Sarantos (spinning dept.), Despinas Sarantos (spinning dept.), Zannie Runowicz (carding dept.), and Lucille Fontaine (weaving dept.). Each worker at the Boott Mills also received a lapel pin in recognition of his and her efforts. Representing the Boott Mills at the pin ceremony were F. Flather, Jr., for the owners, and employees August Jodoin (1894), Effie Gray (1896), Katie Kelly (1900), Peter Goulas (1907), Sophie Kudron (1916), and Antono Neves (1919). [The dates are the years when these employees started at the Boott.] Among the speakers were Mayor George T. Ashe, Congresswoman Edith Nourse Rogers, Massachusetts Lt. Governor Horace T. Cahill, and the Chairman of the Boott Mills J. R. Flather.

The program booklet for the event has a statement from the Boott Mills personnel:  “The Boott Mills is concentrating with America upon one common purpose. Until Victory is achieved, our business is not ‘as usual.’ … A company such as ours, with 108 years of experience in highest quality manufacture, should devote that experience to the preservation of our free institutions. We have dedicated this mill to Victory, and have converted it over to the manufacture of war material. … After victory comes we shall then fight for our ideals on towels, curtains, and corduroy, so as to again serve our loyal customers.”

The event  was broadcast live on Station WLAW and re-broadcast on WLLH later in the evening. 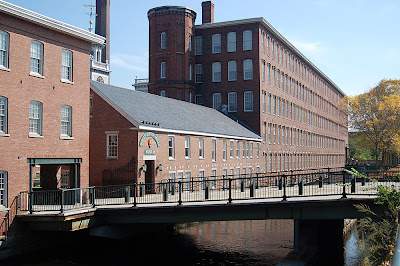