Edited by Tuyet-Lan Pho, Jeffrey N. Gerson, and Sylvia R. Cowan, “Southeast Asian Refugees and Immigrants to the Mill City: Changing Families, Communities, Institutiions—Thirty Years Afterward” was published by the University Press of New England in 2007. Among the contributors to this collection of essays is Leakhena Nou, a former dean of the College of Social Sciences at the University of Cambodia who more recently has been on the faculty of California State University, Long Beach, in the sociology department. She wrote about the psycho-social adjustment of Khmer refugees in Massachusetts, as she says, “from an insider’s perspective.” The book was launched at the Patrick J. Mogan Cultural Center of Lowell National Historical Park on May 6, 2008. The event doubled as a recognition ceremony for local leaders with awards presented by former Massachusetts Gov. and presidential candidate Michael Dukakis. He and his wife, Kitty, attended. She was honored for her advocacy on behalf of refugees from Southeast Asia, as was Executive Vice Chancellor Jacqueline Moloney of UMass Lowell, who worked on refugee resettlement issues early in her career in Lowell; Phala Chea, an administrator for the Lowell Public Schools; Ajahn Mangkone Sananikone, Abbott of Wat Buddhabhavana temple and meditation center in Westford, Mass.; and others.—PM

“An array of community-based organizations exists to respond to the psycho-social needs of Cambodian refugees in Massachusetts. Some examples of these organizations cited by our respondents [in focus group discussions] include health centers, business associates, and Buddhist institutions. A brief description of one such organization, the Metta Health Center, is provided here to give readers an idea of the culturally relevant services the clinic offers Cambodian Americans in Lowell. The Metta Health Center was reported by many respondents to be one of a number of valuable resources within the community’s social networks. Although other community-based organizations and mainstream institutions working with Cambodian Americans were also instrumental in the research project, space limitations preclude our describing them here.

“The Metta Health Center  is a source of physical and mental health care solace for Cambodians in Lowell. It is a ‘West-Meets-East Center’ that incorporates the best of both cultures (for example, primary care and acupuncture) within a single health care delivery system. As part of the Lowell Community Health Center, the Metta Health Center was established in October 2000 to address the needs of the underserved Asian population and increase their access to appropriate health care resources. Metta served as a critical resource center where our research team and respondents could meet.

“The word ‘metta’ refers to the Sanskrit concept of love, kindness, and compassion. The meanings of ‘metta’ resonate with Cambodians, as they reflect both the Khmer perspective and the Buddhist religion. Cambodians seek mental and physical health care from the Metta Health Center to overcome stress or resistance, increase their awareness, and tap into strengths to improve their health and well-being by culturally familiar means.

“The staff at the Metta consists of a medical team, behavioral health team, alternative medicine team, and support services team. All working members are bilingual and bicultural, coming from a wide variety of cultural and linguistic backgrounds. During October 2006, Metta served approximately 940 patients (76.4 percent Cambodians; 21.7 percent Laotians; 1.7 percent Vietnamese; o.2 percent others) through 1,233 visits for physical and mental illnesses. Primary care is the most commonly used service, followed by mental health and acupuncture. Various types of comprehensive assistance are also offered, such as social service referrals, transportation to appointments, domestic violence intervention, and community outreach on health education. . . .” 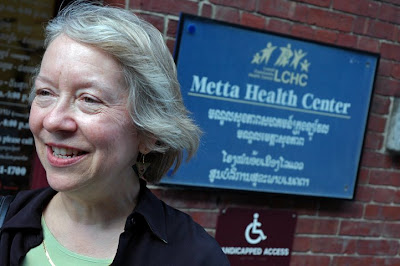